Auto-suggest helps you quickly narrow down your search results by suggesting possible matches as you type.
Showing results for
Search instead for
Do you mean
Reply
Topic Options
KLevineFan
Trusted Contributor

Long NY Times obit on Edd Byrnes:  I was surprised to read about his troubled teen years, very disturbing.  He is to be commended for overcoming that beginning.  His 1996 book Kookie No More, was very frank.

CHICAGO, Aug. 22, 1959 — Some fainted, others sobbed with delight and still others surged toward him to gaze into his face, crowned with a crop of wavy hair.

And so went the mass love affair between Edd (Kookie) Byrnes, 26, and a throng of 18,000 cheering bobby sox fans yesterday at Midway Airport. — The Associated Press

Edd Byrnes, who became one of television’s first teen idols as Kookie — the hair-combing, jive-talking youth on the hit series “77 Sunset Strip” — but found ever after that he could not live the character down, died on Wednesday at his home in Santa Monica, Calif. He was 86.

His death was announced in a tweet by his son, Logan Byrnes. No cause was given.

Broadcast on ABC from 1958 to 1964, “77 Sunset Strip” starred Efrem Zimbalist Jr. and Roger Smith as a pair of suave Los Angeles private eyes and Mr. Byrnes as the parking-lot attendant at the restaurant next door to their office.

As he ministered tenderly to the Thunderbird convertible driven by Mr. Zimbalist in the show, Kookie (né Gerald Lloyd Kookson III) ran his omnipresent pocket comb through his lush ducktailed pompadour, cracked his devil-may-care grin and spouted aphorisms that even at midcentury had all the gnomic obscurity of Zen koans:

“A dark seven” (a depressing week); “piling up the Z’s” (getting some sleep); “headache grapplers” (aspirin); “buzzed by germsville” (to become ill); and, most emblematically, “Baby, you’re the ginchiest!” — a phrase of the highest Kookian approbation.

Mr. Byrnes, an immediate object of desire for the show’s young female viewers, was soon receiving 15,000 fan letters a week. At public appearances he was pelted with combs. With Connie Stevens, he recorded a single, “Kookie, Kookie, Lend Me Your Comb,” which sold more than a million copies and reached No. 4 on the Billboard chart, despite the fact that by his own cheerful admission he could not sing.

Mr. Byrnes was an entirely self-taught actor — and originally hired to appear in only a single episode of the show. By his own account, his life began with a turbulent, impoverished childhood followed by a stint as a male prostitute; peaked with fame, riches and a roster of celebrity friends; and ebbed amid alcoholism and drug addiction before culminating in sobriety and steady, if relatively low-profile, television work.

Edward Byrne Breitenberger was born in New York City on July 30, 1933, and reared in the Yorkville section of Manhattan, then a rough-and-tumble, down-at-the-heels ancestor of today’s gentrified Upper East Side neighborhood.

His father, Augustus Breitenberger — alcoholic, verbally abusive, usually unemployed and often absent — was, Mr. Byrnes wrote in his memoir, “‘Kookie’ No More” (1996, with Marshall Terrill), the black sheep of a distinguished family: Augustus’s father was a noted civil engineer who had helped build the city’s subway system.

From boyhood on, Ed — he would add the extra “d,” with its double dollop of cool, circa “77 Sunset Strip” — held a series of jobs to support his mother, brother and sister: shining shoes, delivering ice, coal and newspapers and operating a drill press.

When Ed was 13, his father was found dead from a head wound of uncertain origin — the death may have been a homicide, Mr. Byrnes wrote — leaving Ed as the head of the family. His only escape, he later said, was the movies, and he dreamed of becoming a star.

At 15, he dropped out of school, and at 17, his build honed by gymnastics, he began working as a photographer’s model. A photographer for whom he posed “set us up on dates with older, rich men,” Mr. Byrnes wrote, drawing him into hustling.

“It was a strange world I had been introduced to,” his memoir continued. “Art, wealth, sadism, limousines, sex for money, theater and fine restaurants.”

He kept watching movies, making a meticulous study of actors’ techniques. He gained valuable, if unorthodox, dramatic experience by helping a friend from the neighborhood, a New York police detective, interrogate suspects, playing bad cop to his friend’s good cop. His role, he wrote, consisted largely of whacking suspects over the head with the Manhattan Yellow Pages.

Around this time, desiring a professional name and wanting to disavow his father, he began calling himself Edward Byrnes.

The young Mr. Byrnes parlayed his N.Y.P.D. training into roles in summer stock. In 1955, he drove to Hollywood in search of stardom.

In 1958 he was cast in “Girl on the Run,” a movie that became the de facto pilot for “77 Sunset Strip.” That film, which starred Mr. Zimbalist as a detective, was meant to be a one-off; Mr. Byrnes’s character was a murderous psychopath who, in a bit of business he came up with on the set, keeps running a comb through his hair.

In test screenings, Mr. Byrnes engendered such a frenzy among the women in the audience that the film soon became a series and his character — resuscitated, one assumes, after a spin in the electric chair — was reborn as Kookie. (In later episodes Kookie has graduated from parking cars to playing junior detective.)

Although Mr. Byrnes appeared elsewhere in other roles, he found it hard to slip Kookie’s yoke. He reprised the character on several shows of the early ’60s, including “Hawaiian Eye” and “Surfside 6,” as well as in “Kookie & Co.,” a 1964 movie for West German television.

By the time “77 Sunset Strip” wound down, Mr. Byrnes wrote, he had become mired in drugs, alcohol and depression — first amid the pressures of fame, later amid the reality of being unable to land more significant roles. He hit bottom in 1982, eventually attaining sobriety with the aid of a 12-step program.

Mr. Byrnes’s marriage to Asa Maynor, whom he wed in 1962, ended in divorce. Their son, Logan, is a news anchor at KUSI in San Diego. Complete information on survivors was not immediately available.

His other television credits include “The Love Boat,” “Fantasy Island,” “Simon & Simon” and “Murder, She Wrote.” His film roles include Vince Fontaine, the oleaginous host of a TV dance-party show, in “Grease” (1978).

If Mr. Byrnes’s later career did not accord him the stardom of which he had once dreamed, he was, by his own account, content. There was one topic, though, on which he would seldom consent to be interviewed.

The subject was hair care. “I won’t talk about it,” he told The Washington Post in 1998, “unless someone’s paying me.”

He was one of my teen crushes.  Rest in Peace, Edd.

I watched 77 Sunset Strip and loved it!  Edd Byrnes was a great character and of course Kookie, Kookie, Lend Me Your Comb  was a big hit at the time.  I can picture Byrnes as I type, he was a big teen idol.  The show also featured Roger Smith and Efram Zimbalist Jr. who were handsome guys also.  Connie Stevens played Cricket, I believe, it was a good cast  and the series did well.

Thank you for your thorough and complete post about Edd Byrnes.  May he be at peace with God.  He may not have reached the stardom he chose but he certainly entertained me and so many others during his time on 77 Sunset Strip.

Awww--  Edd "Kookie" Byrnes was such a sprightly presence on "77 Sunset Strip",   which MeTV was running daily until fairly recently.   A charmer, and he played perfectly off the others, Efrem Zimbalist Jr. and Roger Smith.  RIP.

I was just about to write about "Kookie, Kookie, Lend Me Your Comb."

Glad someone else remembers!

How I enjoyed his character. 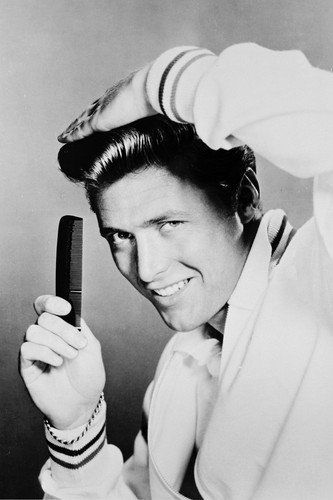 Kookie and his comb--I remember him well.

I had to look him up because I’ve never heard of him. I’ve heard of that show but I’ve never seen it.
Report Inappropriate Content
Message 8 of 13 (879 Views)
Reply
0 Hearts
ms traditional
Respected Contributor

Kookie!  oh my.  all those years ago - and i remember him still!  Godspeed.

He was perfect as "Vince Fontaine," especially his flirtation with "Marty" (Dinah Manoff). I always wondered why I didn't see him more. I don't remember him in Love Boat, although I'm sure I probably saw it!

Another classic Hollywood star gone. Thank you for posting about his life @KLevineFan .