Auto-suggest helps you quickly narrow down your search results by suggesting possible matches as you type.
Showing results for
Search instead for
Do you mean
Reply
Topic Options
Tinkrbl44
Honored Contributor

Saw it for our anniversary.  We enjoyed it.  What we did not enjoy was the movie theatre have previews and commercials for over 45 minutes before the actual movie.

Back to the movie : Well worth seeing.  Very well done and brought back great memories.

It's annoying, but I can't say that I blame them.  Movie theaters are desperate to get people back.   Can you imagine owning a movie theater and all that entails, and you only fill maybe 20% of those seats?  Yikes!

It's a very good movie. Austin Butler is fabulous in the role, doesn't matter at all that he doesn't look exactly like Elvis. Who does? I felt as if I was watching Elvis, especially in the performance sequences. He obviously put so much work into playing that role. Tom Hanks was great too.

I learned all I know about Elvis from my Mom, she loved him. My favorite Elvis performance is 68 Comeback Special, that's featured in the movie too.

I read that Harry Styles, Miles Teller, and Ansel Elgort were also in contention for the role. Austin Butler was definitely the right choice.

He's an actor not an Elvis impersonator. Seeking the latter? Head out to Vegas.

I'm pretty sure we didn't see the same movie! Austin Butler is the embodiment of Elvis from his voice, moves, and mannerisms! Plus he's just stinking gorgeous and talented.  I grew up listening to Elvis and this kid deserves an Oscar (can you tell I liked the movie!)

Oh My!  I saw this movie yesterday and couldn't stop thinking about it.  The history told about his childhood, the tumultuous times going on during the rise of his stardom, that new actor! He nailed it!  I will take my 90 year old mother to see it.  We went to so many of his concerts.

We saw this movie on Sunday and i thought it was good, told from Colonel Parker's point of view.....very interesting he was a real SOB and the facts that came out about him I never knew, as well as some things about Elvis too.....and Austin Butler had the moves and mannerisms down pat.....Tom Hanks was also very good....

One thing I didnt like was that they left out Ginger Alden, his fiancee and last love of his life....There was a scene after the divorce with the parental visit exchange with Lisa Marie and it insinuated that Elvis and Priscialla still had feelings for each other, when Elvis had moved on with Ginger, it was Priscilla that ended their marriage. Elvis loved Ginger dearly, a fact confirmed by many of the family and friends around him.......(I wonder if Priscialla's "approval" of the movie had anything to do with leaving Ginger out...In interviews and projects I always found Priscilla to be a bit of a fame seeker and proved it when she even attempted an acting career...🤔)

Animals are reliable, full of love, true in their affections, grateful. Difficult standards for people to live up to.”
Report Inappropriate Content
Message 26 of 63 (406 Views)
Reply
4 Hearts
songbird
Honored Contributor

It's stated many places that Elvis dyed his dirty blonde hair black. He also had Priscilla dye her hair black to make her blue eyes stand out.

See outsider, countrymusicfamily, yahoo and many  others for facts about this. I've known about it for many years - over 40, in fact.

Here's a picture of him with his natural color hanging in Graceland. 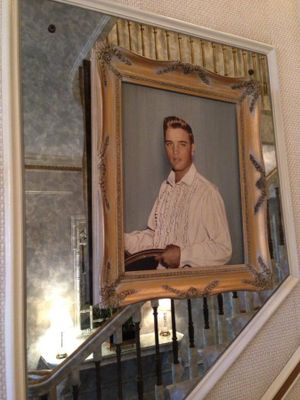 You consider yourself an Elvis expert?   It's common knowledge, even if "you've never read that on all these years".