Internet says the Poodle is Suzanne Somers.  She's the right height, comic, from the Bay Area and is known for exercise.

Oh yeah, I can see Suzanne being the poodle although I had no clue from the clues. I did half guess the pineapple.  As soon as I heard, "up in smoke" it was either of the two men but guessed the wrong one.  I thought the bee was Dianna Ross just because one of clues was started singing in the fifties plus she's been making recent television appearances lately like the Rockefeller tree lighting.  Hmmmmm we shall see!  I really enjoy the show.

Raven - Rikki Lake, ex died in 2017, clues were she suffered a tragic loss and she hosted a talk show.

Alien - no idea who that one might be but I don't think it's a Kardashian.

These are good guesses!  I would have never thought of Ricki Lake but that's a possibility.  I don't know JC Chasez.  I did think Margaret Cho might be the Poodle (not sure about the guesses of Suzanne Somers -- I wouldn't have thought that from the clues).

My friend thought the Bee was Queen Latifah, but I thought it would be someone older because one of the clues said something about the 50's, didn't it?  I was thinking Dionne Warwick but Gladys Knight definitely could be it!

And yes, I thought it was Donny Osmond as the Peacock.  Marie said they started on NBC and commented on some of the other clues (don't know why she is giving it away already!).

Alien I thought might be a Jenner vs a Kardasian, but there are still lots of possibilities.

I guessed right on the Pineapple, Tommy Chong, I think the Bee is Gladys Knight. Whoever it is can sing! I wish they would get rid of Ken [I dont know his last name] but he is annoying. Actually I can only take Robin Thicke, the other 3 need to be sent packing in my opinion.

Uh, NO.   The promos looked like a bad bad take off of

Now the internet is saying the Alien is LaToya Jackson due to the height of 5'5".

I'm not that great at the guessing, but I remember some thinking that she is one of the Kardashian or Jenner sisters.   Yet, not one of them is 5'5" in height.

Kourtney is much shorter, Kim is shorter, and the rest of the girls are much taller.

I have a love/hate thing with the show because it's so ridiculous but I cannot seem to turn away.  One thing, though, the judges are a bunch of chuckleheads.  I do like some of these folks, but they make the show worse, not better.

The Alien might be Rashida Jones. Her Alien costume is homage to her childhood friend, Michael Jackson, who she frequently called an 'alien' because she thought  he was far ahead of this world. The Alien's red outfit seems to mimic MK's Thriller red leather get up. It couldn't have been made identical because then that would be a dead give-away and besides aliens don't wear red suits...only ones that are trying to look like MK...lol! 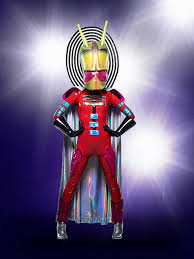 The clues they give are no help, unless you know who it is you can say sure I get it. A lot of people think Rickki Lake is one of the contestant ( was it the alien?). I also thought the bee was Gladys Knight, who ever it is has to be 70ish, I think they're from the Motown label. On the radio this morning ( CBS FM in NYC) they were saying the Peacock is Donny Osmond ( I thought it was him), supposedly Marie let it slip. I don't know when the show was filmed, but I'm surprised things haven't leaked out.

Now that I know who some of these people are, I want to see them perform again.

I believe this week is round 2 and we will see them all again and get more clues.

I still can't believe Gene Simmons was watching this show for no reason. I have to believe someone in his family or someone he knows is on this.

The Deer was Terry Bradshaw! Did anyone watch the show?