Auto-suggest helps you quickly narrow down your search results by suggesting possible matches as you type.
Showing results for
Search instead for
Do you mean
Reply
Topic Options
Judaline
Honored Contributor

@BarbiHollywood  Was that Stacy standing next to you?

@KBEANS wrote:
WOW! I can feel your enthusiasm, excitement and the love you have for our show! @BarbiHollywood

I'm so glad you had a wonderful time and got to meet the cast. Isn't it amazing how "celebs" have that certain something that sometimes isn't conveyed through the screen?

I knew that kid Carson Boatman was a good kid. I saw him in an interview and he seemed down to earth. As a matter of fact all of them must be; taking the time to host an event for a good cause.

Its great when you have a negative view of someone and when you meet them your perspective changes from negative to positive! 😃

I remember Alfonso and Reckell were the total opposite. They acted so entitled and wouldn't even stop for their fans as they were covering their faces while being escorted to the VIP area.

All the others in attendance interacted all night with the fans.
This was at an after party for the Soap Opera awards.
I was crushed. Lost any love I had for them. They continue to disappoint me with their matter of fact attitudes. They'll never return to Days HA! I guess they have their price.

I love Eric, even more after your vivid description. I also knew Jordi would be more attractive in person. He has fantastic bone structure; so chiseled.

Did you know Dan F. /EJ has a pacemaker? Could the dirty feet be poor circulation? I believe you...your so observant...I just don't want him to be a dirty dude! lol

Great review of your afternoon. I felt like I was
watching as you described it. Actually got a tear in my eye.

@MamaWickSo glad you could help her out. Thanks for the blow by blow picture posting instructions.

@KBEANS No, I did not know about Dan F pacemaker.  Wow.

One woman at my table clearly was a big, big Eric fan - but she was bordering on throwing herself at him.  Even the gal next to me (who I'm now FB friends with!) noticed it.  She started a convo with him saying, "So I see a wedding ring...so you're married...do you have any single friends for me?"  Whoa.  Eric kindly came back with, "YOU'RE single?" as in why wouldn't anyone want to be with you, complimentary.  As the day went on, she became more desperate.  During the auction, whatever Eric was holding up to the crowd, she'd yell, "take off your shirt" and "do you come with that, that's the only way I'd buy it."  It was a little weird cuz no one else was fawning over anyone like that.  Then, Eric tried to get the crowd interested in whatever he was holding up (can't recall), and he said, "I'd be happy to write ANY message on it."  She blurted out, "I'll bid if you can write this...."  Then there was a quiet pause, everyone stopped to listen to what she was gonna say.  Then she stated something about abortion -- how men can just go to an ATM or something.  The room was silent.  Then you could hear people whispering that she needs to go home and this isn't a political thing.  Eric just looked at her, as did everyone else.  Then she kinda went away.  But I thought she was strange from the second she sat down at the table.  Ever get a vibe like that from someone without even speaking to them?  Odd. 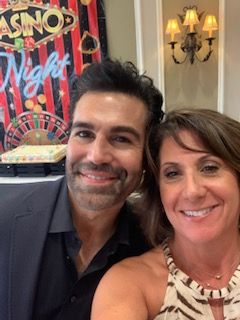 @Judaline  When I say his eyes were intense, trust me.  They were mesmerizing.

@Judaline Yes.  She's about the size of a toothpick.  She's teeeeny thin.  Tall, leggy, and teeny.  And very pretty.

@BarbiHollywood  Was that Stacy standing next to you?

Never mind I just saw the slit in her dress you described. 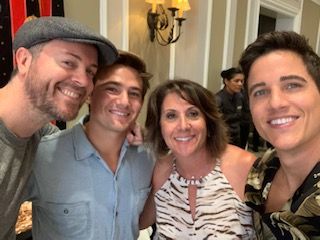 Might make a nice over the fireplace picture, blown  up 50X?

@Judaline  When I say his eyes were intense, trust me.  They were mesmerizing.

I always thought Ben Gazzara had eyes like that-mesmerizing. Must be an Italian thing.

@Judaline - Agree about B Gazzara's eyes! He was mesmerizing - LOL!!

Jordi V is very handsome too!!

Barb, you had a blast and did a great reporting job! I went to a few of these Days charity auctions back in the late 80's. The one that really stood out and worked so very hard to get top dollar for charity was Stephen Nichols, I remember he auctioned off a pair of his jeans, and like you said, they were tiny at the waist.

Barb, you had a blast and did a great reporting job! I went to a few of these Days charity auctions back in the late 80's. The one that really stood out and worked so very hard to get top dollar for charity was Stephen Nichols, I remember he auctioned off a pair of his jeans, and like you said, they were tiny at the waist.

@Shelbelle That's a cool story!!!  I'd like to meet him, that's for sure.  Do you have any pix to post?  We'd love to see them.  I have a few pix from 2014 which Ari Zucker and Shawn Christian that I need to post now that I know how!  I hope I didn't bore everyone.  I'm happy everyone was so nice to me.  There's a show coming up (same hosts, same charity) in September with this same core group plus Bryan Dattilo and two others whose names don't ring a bell -- Johnny Wactor and someone else.  And there's another event (different hosts, different charity) in October, and I was told by the host of that show yesterday that there's only 2 or 3 seats left at Nadia Bjorlin's table.  That might be good to go to cuz I've never met her and Brandon Barash will be there, too.  BTW, he's the celeb who couldn't make it last minute to yesterday's show, that's why Erik Fellows was there.  So as much as I like going to meet celebs, it can get expensive.  So I'm not sure.  The thought of not snagging a seat at Nadia's table, though, makes me wanna cry.  Maybe I need to start stashing $5 bills in a jar until late-October!