Auto-suggest helps you quickly narrow down your search results by suggesting possible matches as you type.
Showing results for
Search instead for
Do you mean
Reply
Topic Options
Highlighted
wildflowers
Respected Contributor

I loved this version by Bradley Cooper and was so impressed by him as both a Director and Actor...I thought it was one of his best performances.

I was amazed at Lady Gaga without all of the makeup that we usually see her wearing...She looked lovely with her natural look and was also very good in her role.

I saw it twice with friends and one of my girlfriends is now going to have a Movie night at her house on June 8th!

I loved that movie!   I am going tomorrow to see Rocketman.  Looking forward to that also.

@DiAnne   There's a review thread in this forum for Rocketman!  I hope you love it and post your own review on that thread.

I'm curious esp. now that Gaga has broken her engagement and Cooper/Shayk relationship is struggling.

Have to wonder if the rumors were true?

Reminder.  I plan to watch it tonight.

I would love to hear everyone's opinions.

A good time was had at Movie night at the home of one of my girlfriends... There were five of us and this is the third time that I saw this movie...the first two times were at the theater.

The last hour was especially raw!....I will put my thoughts into a Spoiler so as to not reveal anything to those who haven't seen the movie yet.

My girlfriends and I were so enraged at Ally's callous manager!...Jackson had just gotten out of rehab and appeared to be doing well...However, during this delicate time for him, Ally's manager felt it necessary to tell Jackson that he was an embarrassment to Ally and a detriment to her career.

This is what sent Jackson over the edge and caused his suicide...Although it may have even happened regardless, it was heartless and cruel of Ally's manager...Ally never knew about the talk that her manager had with Jackson.

Bradley Cooper's raw version of this movie brought out heartbreaking emotions and a very raw and emotional ending!

@wildflowers  Yes that was very selfish of him. I wonder how her manager felt when he found out what happened or if he cared?

@wildflowers  Yes that was very selfish of him. I wonder how her manager felt when he found out what happened or if he cared?

@colliemom4 ...I doubt very much that he cared at all or experienced any guilt whatsoever.

The precious dog in the movie is actually Bradley Cooper's dog, Charlie...He stole my heart! 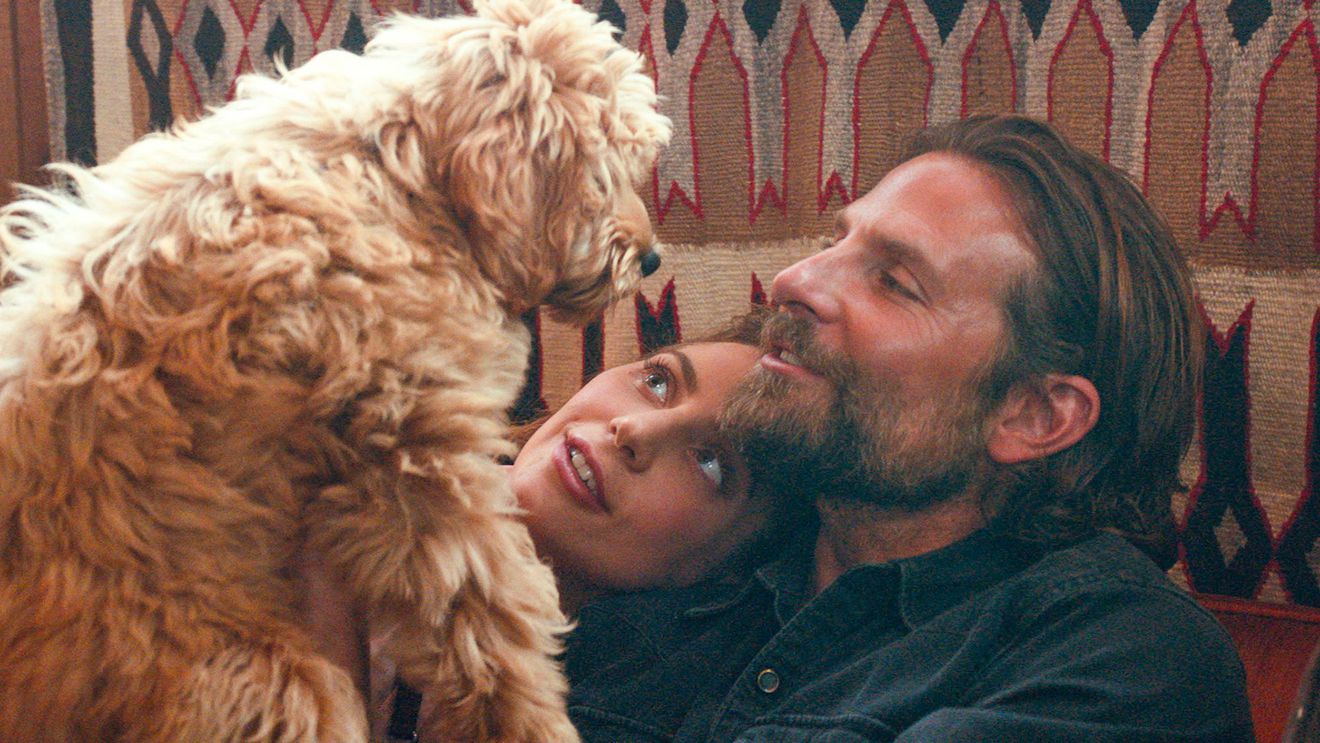 @Pearley ...So how did you like it?...Inquiring minds want to know!

@Pearley ...So how did you like it?...Inquiring minds want to know!

@wildflowers   First off, I want to thank you very much for the reminder that was Bradley's real dog.  I had read that when the film first came out, but had completely forgotten and I kept thinking how adorable the dog was.  So thank you for reminding me of that tidbit!  I hope in the Brad/Irina breakup, he keeps the dog!

I have a lot to say about the film so here goes.

I liked it a lot, didn't love it.  Glad I saw it but probably wouldn't watch it again.

Brad did do a really great singing job as I'd read - how surprising - who knew? Gaga's singing was, of course, wonderful.  I loved all the music in the film, esp. the number the two did at the Academy Awards, but all the songs were very enjoyable IMO (although the final one was not my favorite).

All the acting was good. I was suprised in the credits to see Andrew Dice Clay as Gaga's father, although he looked familiar to me all through the film.  And OY - hunky Sam Elliott has certainly aged (he looks too think to me).   Loved Gaga without all her makeup and outrageous costumes - she should always look like that!

I thought Bradley's direction was quite good for a novice directing effort, although there were placed where it dragged a bit.  However, I thought his horrible decline at the Grammy's came about too suddently in the film.  It was a drastic downfall (yes, I know he had "issues" from the get-go and was getting jealous of Gaga) --- it was too sudden though.  I blame that on the directing/script (which Brad helped write).

I had trouble with the sound, so I missed some crucial dialogue between Brad and the manager near the end (in your spoiler) although i could easily figure out what it was, and plan to watch the last half hour of the film again during tonight's repeat.  But when I turned my volume up so I could hear all the dialogue better, then the music was too loud.  So I turned the volume down so the music wouldn't be too loud and then I had trouble hearing some of the dialogue. That may have just been my TV set, but I haven't had that problem with anything else.  Anyway, I missed some dialogue (not just that scene, some of Sam E.'s too, who mumbles anyway).  That bothered me.

I have the same comment someone here in the forums made when the film first came out in theaters.  I thought the glitzy tranformation of Gaga into a J-Lo-ish creature with dance numbers and sequins, and esp. the hair color (which isn't J-Lo related) were just unnecessary and it would have been better if Gaga had become the success she did being lower key (like a  Michael Buble or Josh Groban rather than glitzy).  The hair color was awful.  I think the film could have been just as effective (if not more so) with that kind of success too, and in fact more credible.

I thought the crucial scene with Brad at the end was well done for not being graphic.  it was very effective the way it was done.

I liked this version better than the Judy Garland and Barbra Streisand versions, so I really did like it.  But didn't love it.  I might be willing to buy the sound track though!

ETA: I didn't really understand Gaga's reluctance to take him back after his rehab stint.  She said she wanted the best for him and he drank more when he was with her ...but still...if she was so madly in love with him, I really didn't "get" that scene.   And he said he just wanted to come home and be with her; I'd have been thrilled, not reluctant!

We had the same sound issues when watching it last night...constantly turning the volume up and down...practically blasting our eardrums along the way!...lol...Bradley's manner of speech in his role also made it difficult to understand at times, so we had to play back some of the scenes...However, when I saw it in the theater, of course there were no issues with the sound whatsoever and watching it on the large screen was also a plus!

As far as Lady Gaga's transformation, I agree....The storyline, in the beginning,  emphasized on her being confident with herself and her natural look....Of course, once she became a Star, I would expect her to vamp up the makeup and costumes somewhat, but I agree that it was overdone...Jackson didn't care very much for her transformation either...Her manager convinced her to make the change...I agree that the storyline would have worked fine if her look had been kept more natural and toned down.

I don't feel the same about Jackson's decline at the Grammy Awards being too sudden.   If anything, I felt that it was definitely overdue as he was in such a horrific state throughout the entire movie...It didn't come as a surprise that he got himself all wired up before attending and I didn't really feel that he was as jealous of Ally's success as much as he was at having a difficult time in dealing with his disastrous career decline due to his addictions.

I didn't see Ally as really being all that reluctant about taking Jackson back after his rehab...What I saw was that it appeared that she had placed the blame for his decline on her success...Of course, we know that he was already a mess when he met her, but she processed his decline differently and, out of her love for him, she wanted to be sure that he didn't feel any pressure and wanted him to make any decisions that he felt would be best for himself.

I didn't see the Judy Garland version but I did see the Barbra Streissand/Kris Kristofferson version and, for me, I found it rather bland compared to Bradley Cooper & Lady Gaga's raw and emotional onscreen performances.

Oh, by the way, Charlie is definitely Bradley's dog so, wherever Bradley goes, Charlie goes!

It's been interesting sharing our thoughts @Pearley ...We both were quite detailed in our responses so can you imagine if we actually got together!...LOLOL