I couldn't stay up last night for the news, so here is what I have so far from Twitter posts:

There will be 103 original @hallmarkchannel movies made in 2019. Not all are Christmas stories, so you’ll get lots of programming this year. #tca19

#CountdowntoSummer ☀️ is coming this May with three all-new original movies to help you get ready for the summer months of sun ahead! #TCA19

@hallmarkmovie #Breaking #POstables The announcement you’ve been waiting for! @HallmarkDrama is developing another installment of the fan-favorite movie franchise, #SignedSealedDelivered, created by executive producer @Marthamoonwater #TCA19

@HallmarkChannel Premieres Season 5 ✨#GoodWitch on Sunday, May 5 at 8pm

We’re thrilled to share that @hallmarkchannel has announced the renewal of #ChesapeakeShores for Season 4!

Plus a Chesapeake Shores spin off: 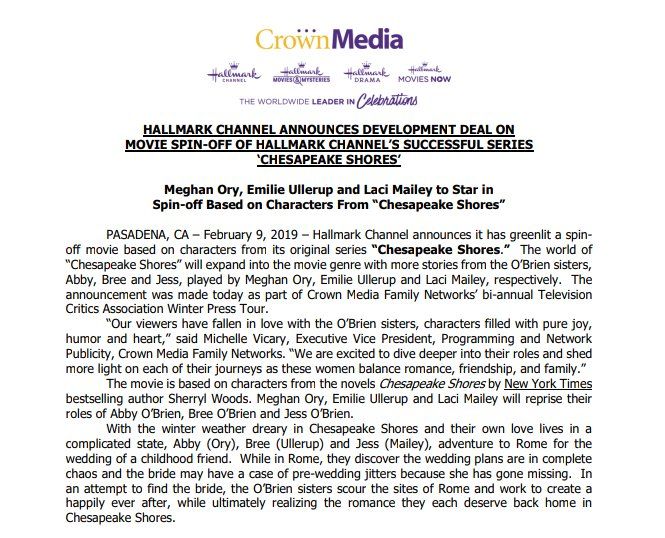 Thanks for posting this @VaBelle35.  I hadn't put Chronicle Mysteries on my Tivo list to let me know when it was available for recording.  I just did and see that the first movie is coming up this month.

It's too difficult to try to record all of these things with so many different names.

Of course, now I have to just pay attention when they change the start times.

Luckily they re-run most things.

i'm annoyed with hallmark, because i can't find a rerun of the When calls the Heart christmas show. i missed it and would love to see it. i'm hoping they will replay just before new season. i will totally miss jack!

@10sluvr  They never re-run anything on WCTH.

You have the option for a short time to watch it on iTunes and Amazon for a fee.

Or you can wait until the season is over and buy it on DVD either just that movie or the whole season (the Christmas movie is always included in the season set).

All of the above and still nothing about a new Jesse Stone movie. I'll continue to wait...

PASADENA, Calif. – Whatever you’ve enjoyed on the assorted Hallmark Channels in the past, expect to get more of that feel-good programming in 2019.

Saturday night at the Television Critics Association winter 2019 press tour, Hallmark executives announced a deluge of new programming, including 103 original movies for 2019, up from 87 in 2018 (61 on Hallmark Channel, 42 on Hallmark Movies & Mysteries).

In August subscription streaming service Hallmark Movies Now will gets its first original series, “When Hope Calls,” a spin-off of Hallmark Channel’s “When Calls the Heart,” which debuts its sixth season at 8 p.m. Feb. 24. “When Hope Calls” follows Lillian (Morgan Kohan) and Grace (Jocelyn Hudon), sisters who were introduced in 2018’s “When Calls the Heart: The Greatest Christmas Blessing,” as they open an orphanage in a small Northwest town.

“Chesapeake Shores” returns for a fourth season in summer on Hallmark Channel, although it will have just six episodes, down from 10 in 2018. A spin-off movie on Hallmark Channel will follow the O’Brien sisters – Abby (Meghan Ory), Bree (Emilie Ullerup) and Jess (Laci Mailey) – as they travel to Rome for the wedding of a childhood friend.

Hallmark Channel’s “Good Witch” returns for its fifth season at 8 p.m. May 5 as Cassie (Catherine Bell) and Sam (James Denton) finally get married.

Although it wasn’t that long ago we finished cleaning up from Christmas 2018, Hallmark is already well into planning the movies that viewers will be sipping cocoa while watching at Christmas 2019.

Kristin Chenoweth (“Pushing Daisies”) will play a youth choir director and Scott Wolf (“Party of Five”) is a widowed father of a choir member (naturally!) in “The Christmas Song.”

The first movie adapted from a Hallmark Publishing novel, “The Christmas Company” by first-time novelist Alys Murray, will be part of the Hallmark holiday slate.

The annual “Countdown to Christmas” programming event, which in 2018 made Hallmark Channel the highest-rated cable network among women 18-49 and 25-54 in the fourth quarter of 2018, celebrates its 10th anniversary in 2019 by airing repeats of past holiday films on Friday nights year-round.