the ravens are on the beach this weekend! well, some of them are......a few older players and some newer and current players, and some coaches.....and of course, the cheerleaders. it is the annual RAVENS BEACH BASH in ocean city, md.

sooooooooo looking forward to preseason football, especially since my orioles are not doing a darn thing these days!

Those cheerleaders look seriously overdressed for a day at the beach. The preseason will be here before you know it.

That Minnesota Miracle to knock out the Saints was truly a miracle, and not a great play. Keenum threw the ball too far inside the out of bounds line, to a receiver that had a safety closing in, ready to tackle him. Had the safety simply slowed a tick and focused on making the tackle, the Saints would have advanced. Instead the safety ducked his shoulder, rolled under the receiver and took out the corner who was pursuing the receiver. Simply tackle the guy inbounds and the game ends. If the corner hadn't been taken out, he'd have likely been able to make the tackle. That was far more miracle (and bad play by the safety) than a great play by the Vikings. That should never happen. Keenum threw up a prayer, because there was nothing else to do, and got very, very lucky. That pass should have been thrown closer to the sideline so the receiver could get both feet down then step out stopping the clock. Instead it was thrown too far inside, but the safety, who should have been playing safe, made a bone-headed play and the Vikings won.

I know that Packers team has some holes, but they have two really good things going for them. A really good head coach, and arguably the best quarterback in all of football. Either of those two things can drag a team to victories despite gaping holes, but when you combine the two, those gaping holes start to look a lot smaller.

I'm just not seeing what others are seeing in the Giants. They started out the season healthy last year and got off to an 0-4 start. They've flushed their entire offensive line this offseason, lost their dominant defensive end in JPP, lost their better starting corner in Dominique Rodgers-Cromartie, hired a head coach who is reportedly the least inspirational speaker local reporters have ever heard (from his time with the Eagles anyway). They've got a fairly brutal schedule. Their starting quarterback has been slipping and among the lower tier quarterbacks for the last five years. They made a few good picks in the draft, but at low value positions. I think Saquon Barkley will be a beast, but just a great running back doesn't mean squat. Adrian Peterson, Eric Dickerson, and lots more all-time great backs never played in a Super Bowl. I could see the Giants winning as few as three games this year, maybe less. When you look at their schedule, it's hard to find wins. The Bucs and Bears games look like the only games where the Giants might be favored. Of course, that's why they play the games. Maybe Eli will be reborn and play like he did in his prime. You never know. 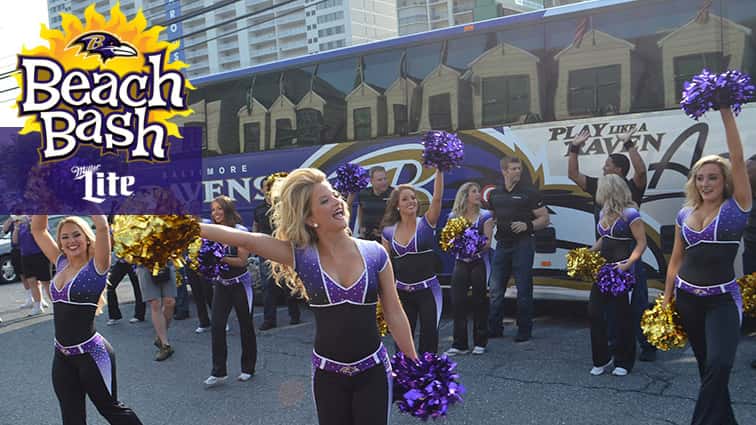 Just for comparision sake, here are the Eagles' cheerleaders at the beach. Versus the Ravens' cheerleaders at the beach.

I don't seem to recall ever having been around a bunch of beautiful, fit young women who decide to head to the beach but, "First, let's all change into long-sleeved shirts and jeans!" Yeah, that's real beach attire. (Sadly, I'm seldom around a lot of beautiful, fit young women. When I am they're typically wearing surgical masks/gowns and prepping me for surgery. Such is my life.)

As to the weather, around here it can be forty with snow flurries and you'll find women on the beach in fewer clothes than that. I'm sadly disappointed in those Ravens cheerleaders. I'm guessing the Redskins cheerleader scandal has the Raven's cheerleaders adopting a different outward appearance. Next year they'll no doubt be in burkhas. Pity!

By the way, it took me a while to post that response as I had to go through literally hundreds of photos of Eagle cheerleaders in swimsuits to find just the right one. It's a burden, but I do it for my fellow posters to keep us all informed.

I agree with you about the Giants....of course it's mostly a NYC fan base and perhaps the media is a bit intimidated--tough crowd...

I think with the edition of a G and RB Barkley, a returning OBJ they think they solved all their problems....while it may help....they still have question marks at many positions, and created some on offense and defense....Eli Apple and Ereck Flowers seem to be busts,(they tried to trade Flowers but no takers, and the new coach decided to give Apple a second chance)  they got rid of JPP....they have a new coach and tougher schedule too....And did Eli just need some help, OR is his age starting to show??????????? They certainly are not contenders in my book and 6 wins may be a little high for them to obtain....JMHO!!!

Likewise my Redskins have a brutal schedule and an early bye week.....Players will have to stay healthy just to get to a 7-9 record---although our defense has improved with the draft and a healthy Jonathan Allen back.....and Guice should help the running game and it will challenge RB Rob Kelley to play better too, or else he will lose his full time starting job to Guice.....New QB who needs to develop a rhythm with new team WRs...Doctson and Alex seemed to make some good progress in OTAs and FA Richardson should be a HUGE improvement to Pryor!!!!  I just wish TE Jordan Reed could stay healthy!!!  Crowder is the slot receiver and should be more effective with Alex as QB--Crowder wont have to deal with throws down around his ankles....and things should be better down in the Red Zone too......But we have a way to go.......

I have a feeling Jerry Jones is going to be a tad disappointed in his Cowboys this year......Sorry I dont see them winning 10 games!!!....

Redskins   W  (like I said with rivalry-games will be split)

So my prediction is 6-10 for the Cowboys---just the opposite of Archer who predicts a 10-6 and possible playoffs...

Cards---  W (they may have a new QB like the Redskins, but Cards also have a new coach to adjust to, and Bradford is coming off knee injury)

By the way, it took me a while to post that response as I had to go through literally hundreds of photos of Eagle cheerleaders in swimsuits to find just the right one. It's a burden, but I do it for my fellow posters to keep us all informed.

And we know how "difficult" a task that was just to keep us all informed....

As for the Giants, losing OBJ and the rest of the receivers hurt last year, but that happened in week five and they were 0-4 at the time. They're hoping their new offensive line is better, but they're moving Ereck Flowers from his natural (if poorly played) left tackle spot to right tackle. At right tackle he'll be facing Brandon Graham of the Eagles twice, Demarcus Lawrence of the Cowboys twice, Ryan Kerrigan of the Skins twice, and lots of other really good pass rushers. When Jason Peters got hurt last year there was brief talk of moving Lane Johnson to left tackle, but then they looked at who the pass rushers were in upcoming games and decided to keep him at right tackle. Many defenses now put their best pass rusher over that right offensive tackle to get pressure in the quarterback's face. It used to be you'd attack the blind side, but now they're more getting in his face. Barkley will be good. OBJ will make some plays, but I just keep coming back to maybe 3-4 wins for the Giants, and that could be optimistic.