Auto-suggest helps you quickly narrow down your search results by suggesting possible matches as you type.
Showing results for
Search instead for
Do you mean
Reply
Topic Options
teganslaw
Respected Contributor

I never heard of Redskin peanuts. You probably should stock up on them; some people might decide to pulll the product because of the name.

I'll be watching most of the draft on NFL Network. I like Rich Eisen and many others on that network. Maybe switch to ESPN occasionally. I'll also check the Colts forums to see other reactions.

McLaurin is one of Washington's best players, so they need to keep him. I read that Chase Young is doing well in rehab, so that's a good sign.

A couple Colts fans suggested that the team should trade Quenton Nelson for Deebo Samuel. I don't think so. I wouldn't let Nelson go anywhere unless there is no other alternative. Besides, it's not happening.

I've watched the draft on ESPN since the first televised one many years ago, so I stick with them. I'll have lots of other sources up on my tablets and phone though.

I got hooked on the NFL draft I remember surfing the channels lat one night for something to watch and stumbled on this show with all these NFL GMS on their NFL football helmet phones wheeling and dealing and adding players to their team....I was intrigued and have watched it ever since.....

According to reports Washington does not plan to offer a contract extension to Daron Payne....they could regret this....but that little incident on the sidelines with Chase may have done Payne in....Rivera is not the type of coach to put with this nonesens....The team does need depth on the D line after some changes were made to the roster...like losing Tim Settle...One speculation to replace Payne was Rivera's old team once again....Panthers DT Star Lotulelei......

Ron Rivera said he is pleased about Chase Young's rehab progress....and doesnt have a time line as to when he will be ready....they will go with the doctors, but what was interesting he said this season Chase is focusing more on football instead of money making opportunities like he did last year (and it was insinuated that impacted his play when his numbers fell off and he wasnt playing as well)....I hope he FOCUSES this season!

Isn't it interesting that they have Redskin peanuts, Redskin potatoes but their have been no protests.....YET.....but Im sure eventually someone will complain....SMH!!!  One fan suggested that the Redskins just use a potato as their mascot in order to keep the name..There were even mockup helmets done.....LOL  Personally I like the one potato helmet..... 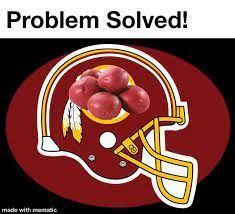 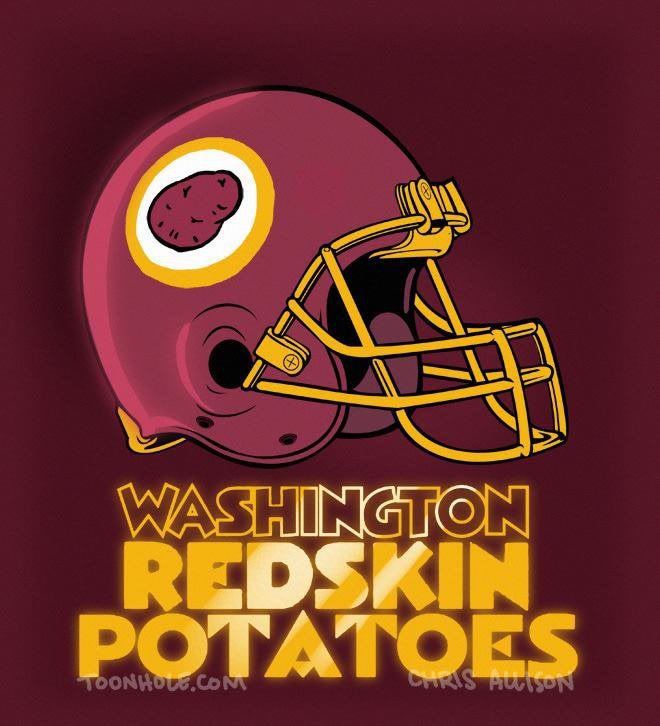 Animals are reliable, full of love, true in their affections, grateful. Difficult standards for people to live up to.”
Report Inappropriate Content
Message 183 of 292 (113 Views)
Reply
0 Hearts
gardenman
Honored Contributor

The Panthers at six make sense for the Eagles. We have a spare starting left tackle and they need one. Bundle Andre Dillard and pick fifteen and maybe a fifth to move up to six. The Panthers might still get their pick of QB at 15, they'd already have a good, young, starting left tackle in Dillard. They've already told Sam Darnold that they're getting another QB. In the draft? Via trade? Minshew?

Teams looking to move back may prefer not to move back to 24 (Cowboys) or 29/30 (Chiefs), so that puts the Eagles at 15 and 18 in a better negotiating spot. We'll find out tomorrow if any of the rumors are true or not.

Coach Ron Rivera had some positive remarks when asked about how Wentz has been in the building since the start of the offseason program.

“It’s been kind of cool watching him interact with his teammates, interact with the coaches as well,” Rivera said at his pre-draft press conference this week. “He’s got a different skill set. And it’s interesting to watch guys’ reaction. He’s reached out to a lot of them about throwing extra, stuff like that. And those guys have all responded in a positive fashion. So it’s kind of created that vibe that you’re looking for, you’re hoping for. And you feel good about it, you really do. And there is some optimism, obviously, just walking around the building.”

Rivera also noted that with Wentz in tow, the offense is likely to “grow a little bit more because Carson does have a couple more tools that Taylor [Heinicke] doesn’t have.

Well so much for Wentz being a "bad teammate" and keeping to himself, and "lacks leadership"...(SARCASM)...I dont understand why so many in the media and fans hate Wentz....SMH .🙄

And let's talk about the Bad Boys....errrr.....Dallas Cowboys...Cowboy CB Kelvin Joseph is involved in a murder investigation..he admits being a passenger in the car involved in the shooting....in the meantime--- he’s participating in the the team's off-season program.....Jerry Jones said “It’s under investigation,” “I have no information that impacts his status this time of year. He's very active and involved in getting ready for the upcoming season.  I don’t know any more than I’ve seen written......"  Maybe Joseph is TOO ACTIVE in the criminal element.... Will Joseph's season be on an NFL field or in prison...STAY TUNED....Keep selecting those "bad boys"...Jerry! 😄

Animals are reliable, full of love, true in their affections, grateful. Difficult standards for people to live up to.”
Report Inappropriate Content
Message 185 of 292 (89 Views)
Reply
0 Hearts
gardenman
Honored Contributor

I've never understood the Wentz hate. It's just dumb. Is he perfect? No. Nobody is.

Eli Manning in his last few seasons would curl up into a ball and fall to the ground at the first sign of a pass rush. Wentz stands in the pocket and tries to make a play. Does it always work? No. Does it work more often than not? Yes. He just wants to win. He just wants to make plays. That's not a bad thing in a QB. Does it lead to an occasional turnover? Yes. But he makes more plays than he gives up.

I've never understood the Wentz hate. It's just dumb. Is he perfect? No. Nobody is.

Eli Manning in his last few seasons would curl up into a ball and fall to the ground at the first sign of a pass rush. Wentz stands in the pocket and tries to make a play. Does it always work? No. Does it work more often than not? Yes. He just wants to win. He just wants to make plays. That's not a bad thing in a QB. Does it lead to an occasional turnover? Yes. But he makes more plays than he gives up.

I tease my sister unmercifully about Eli crawling into a little ball like a scared armadillo ...LOL...

Animals are reliable, full of love, true in their affections, grateful. Difficult standards for people to live up to.”
Report Inappropriate Content
Message 187 of 292 (79 Views)
Reply
0 Hearts
gardenman
Honored Contributor

Unless Kelvin Joseph's lawyer cut him a sweetheart of a deal, he'll get prison time for being an accessory to murder. His idiotic lawyer put him in the car that the shots were fired from. You don't do that. He was part of the group fighting earlier that led to the shooting. He was in the car when the shots were fired from the car. He didn't come forward immediately and tell what he knew. The kid's looking at a five to ten year sentence and serving three to five years. He's got all kinds of trouble. If his lawyer cut an iron-clad deal assuring no prosecution in exchange for his testimony, then great. Otherwise, his next uniform will be an orange prison jumpsuit. The whole rap star lifestyle is stupid. You just can't let yourself be in that kind of a situation.

I always liked Carson Wentz and think the Colts gave him a bad deal. I have criticized him for making mistakes, but every player has bad games. Nothing against Matt Ryan, as he is a good signing, but Wentz should have been given another chance.

The Colts want to keep TY Hilton and get him to sign another year. He had an off  season, but Ballard believes in him, and Hilton is respected and a good mentor for the other players. He might be close to retiring if they can't reach a settlement.

Wolfe is OK, and I think Kimmi Chex would be a good host. As a rule I don't watch GMF, but the atmosphere on that program seems to fit her personality. I have watched Kimmi on fantasy podcasts, and like her energy. I'm not familiar with Rachel Bonnetta.

Kay Adams might be going to Amazon Thursday pregame show, but it's not yet official.