The Eagles have traded Torrey Smith to the Panthers for cornerback Daryl Worley. That saves the Eagles about $5 million in cap space, gets them another young corner, while Cam Newton gets a wide receiver. This looks like another win for Philly.

Heard on the NFL Network's Good Morning Football that Denver may be planning on aggressively going after Kirk Cousins. The trade yesterday of Aqib Talib to the Rams freed up lots of money. The Broncos now have 35 million that they could throw at Cousins. And there is another Denver trade expected bumping up the total to 40 million. Apparently Elway considers himself a savvy negotiator after landing Peyton. And the story on the NFL Network was that there is also the Shanahan connection on both sides. So their thinking was that Elway might be freeing up $$ with the Talib trade plus one other so that he can go all out to get Cousins. Time will tell!!

Now the Browns have traded two picks to Miami for Jarvis Landry, their wide receiver. Lots of trades going down this year. No word on what the picks were, but one was in 2018 and one in 2019. Would the 2018 pick be the Browns fourth overall pick? That's likely way too high, but would definitely shake up the draft. There's been some talk of the Dolphins possibly grabbing a kid QB to groom to replace Tannehill.

Edited to add update: The draft picks are not first or second round picks.

Interesting. The Browns have now traded a third round pick for Buffalo's quarterback Tyrod Taylor. That's probably a QB they're planning to use for a year as they prep a kid. I think most people had assumed they'd sign AJ McCarron for that role.

The trade maybe means that Cleveland won't draft a quarterback in the first round, instead might go with Saquon Barkley. Landry will be one of the highest paid wr's in the NFL; Cleveland has the money.

Buffalo will go with Nate Peterman as their qb? If I recall, that didn't work out so well.

The Raiders are pushing for Doug Martin. If he goes to Oakland, that could affect Marshawn Lynch.

Richard Sherman probably won't be out of  work long. There will be a few teams who try to sign him. He'll demand a lot of money, so they need to be prepared to pay out.

Yesterday was "Trade-A-Palooza" day in the NFL. The Browns alone made three trades, picking up a QB, cornerback, and wide receiver. The Eagles made another trade and so did the Rams. Things might quiet down a bit over the weekend only to pick up again come Monday as teams start to learn if they are in the running for free agents they've targeted.

Barkley seems to be the big prize this draft......maybe the Browns arent enamored of any of the QBs in the draft so they grabbed Tyrod Taylor.....it will be interesting to see how the QB situation goes for them this year....i hope the Browns DO draft Barkley I saw drafts where the Giants were just drooling at the #2 spot for him....Gee the Browns would spoil their plans.......as Grumpy cat would say....GOOD!!! we can battle with them for last place in our Division.......GO BROWNS! ... I want my sister's team to get that last place "honor"............ 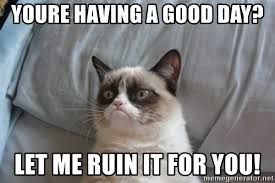 Oh Oh...but if the Browns grab Barkley they have the Giants taking Chubb....which everyone had for the Colts in the mock drafts.........Sorry Tegan......Idont wish any bad will to your Colts....maybe theres a better choice for your team...

At the Alamo Bowl this year Stanford played TCU and I don't quite know the circumstances but my brother met Stanford safety Justin Reid...who is very versatile can play both free and strong safety and looked good at the combine...anyway my brother said there are rumors Reid could be a Redskin draft pick.....(he is the younger brother of Eric Reid of the 49ers)....Gee inside info...who wouldve thunk it, and my brother isn't even a Redskin fan, he's a Ram's fan.....I guess it's all who you know...LOL!!!  Anyway sounds like a decent pickup.....

Looks like ESPN is revamping the MNF booth....as we all know Gruden went back to coaching and now Sean Donough has been moved to college football....Sorry Sean but you put me to sleep, there was no excitement in his voice, to me he'd be perfect for GOLF.....  they are replacing him with Joe Tessitore and the analyst is yet to be determined since Peyton gave ESPN a no go for a job with them.....

Adam Schefter on ESPN was speculating that the Browns could still draft a QB with their number one pick...but let Tyrod Taylor start the season, or even play all 16 games, while giving the rookie time to learn and observe. Others have said that Cleveland may likely draft Saquon Barkley with their first pick...but also get a QB with their fourth, as there are at least five top QB possibilities. So even if the Giants and Colts took two of the QBs....which is unlikely...there would still be at least three others from which to choose.

And have read that maybe Buffalo would give the Eagles both of their first round picks for Foles! I think the Bills have two consecutive picks...21st and 22nd. Now that was just one writer's opinion...but guess it could happen!

The scenario of Elway going for Cousins was shot down by some who said Elway was in the mix for Tyrod Taylor. Their reasoning was why would Elway have been interested in Taylor if he is serious about Cousins? Seems more likely that Elway is thinking of using his number five pick to get a QB...but wanted Taylor there to play in 2018.

Will be so interesting to see how this all plays out!

And I agree @SPURT about Sean with ESPN MNF. Seemed like a really nice man...but was not very dynamic! Almost gave too much info at times...and in a droning monotone that was sleep-inducing! Ron Jaworski from Philly would be great! His enthusiasm is contagious!

I still have the Browns taking a QB first overall. Don't forget that last year the Bears signed Mike Glennon, then traded up for Trubisky. I think all the talk of Barkley to the Giants is just talk. I think they'll take a QB. It's not that often you have this quantity and quality of young QBs in a draft. Eli hasn't been great the last couple of years, and he's not getting younger. I think the Colts will either trade down, or take Bradley Chubb. I think the Jets, Cards, Bills, or someone, will want to trade up ahead of the Broncos to get a QB. I've still got three QBs going in the first four picks and four wouldn't shock me.

I still think the Broncos will look at Foles over a kid. They've had very little success drafting kids. Paxton Lynch can't stay healthy and hasn't impressed when healthy. Trevor Siemian is reportedly on the trading block. Brock Osweiller wasn't the answer. Do you try to find a kid again, or go with a proven vet? If they go for a kid, they're likely taking the fourth or fifth best kid, unless they trade up. Trading up is insanely expensive. They made an offer for Taylor, but came up short, so they don't seem all in on Cousins.

When you rank available QBs, Bradford might be the best available talent wise, but degenerative knees are not good. Cousins might be next, followed by Foles, Keenum, and Bridgewater. Elway might take a chance on Bradford. He did sign Manning after his neck issues, so maybe Bradford's knees don't bother Elway.

It's going to be interesting to see where all the players wind up.