Auto-suggest helps you quickly narrow down your search results by suggesting possible matches as you type.
Showing results for
Search instead for
Do you mean
Reply
Topic Options
cherry
Honored Contributor

Thanksgiving is one of the most purely and authentically American of holidays. Outside of the United States, it is very seldom recognized. And yet, with its origins tracing to the earliest of European settlers, there are elements of the Thanksgiving harvest that stem from European customs that have been going strong since the Middle Ages.

The most notable link between the New World holiday of today and the customs of ancient Europe relates to the feast of St. Martin of Tours, held on Nov. 11.

Martin, a Roman soldier, is renowned for a single, bold act of charity that landed him a special place in the hearts and minds of Europe’s faithful. For centuries, Europeans celebrated his feast day from England and France to Germany and Hungary. The custom was to attend Mass and then devote the remainder of the day to parades, games and a big feast, which includes drinking St. Martin’s Wine from the grape harvest and eating a traditional roast goose.

St. Martin’s Day, or Martinmas, could arguably be called the Thanksgiving Day of the Middle Ages, with harvest feast traditions that carried on even after the Reformation. So sustained were these customs that the pilgrims would eventually take the roast goose idea and run with it all the way to New World, contributing, in part, to the customs of Thanksgiving Day here in America.

While eating goose and drinking St. Martin’s Wine were the most popular manifestation of the European holiday, the part most cherished by children were St. Martin’s horseshoe cakes or cookies. These little cookies resemble a horseshoe covered in snow, to remind us of the legend of Martin the soldier riding through the snow and helping a poor beggar. The legend goes that Martin, riding on his white horse, came across a poor man unclothed in the frigid cold. Martin drew his sword and cut his cloak in two and gave half of it to the cold, poor man.

So, as we prepare for the upcoming holiday that is Thanksgiving Day, let’s also give a nod to the man who planted the seed for the holiday in the first place. Let us be inspired toward humility by the charitable act attributed to him – an act that is remembered through the centuries and memorialized in the sweet and festive horseshoe cookies.

These little cookies resemble a horseshoe covered in snow, to remind us of the legend of Martin the soldier riding through the snow and helping a poor beggar.

In a medium bowl, combine flour, ground almonds, baking powder and salt. Set aside. In a large mixing bowl, cream butter and sugar. Stir in beaten egg, vanilla extract and almond extract. Slowly stir in flour mixture. Knead the dough on a floured surface and then form into a ball. Divide into two pieces and roll individually in plastic wrap. Refrigerate for about an hour.

Remove dough from plastic wrap. Scoop tablespoons of dough and roll into balls. Then roll balls into 3-4” long tubes onto a floured surface. Place on a cookie sheet in the shape of a U. Bake for 12 minutes or until light golden brown on edges. Transfer to a cooling rack and dust cookies with powdered sugar when cool. These are great with coffee or tea. 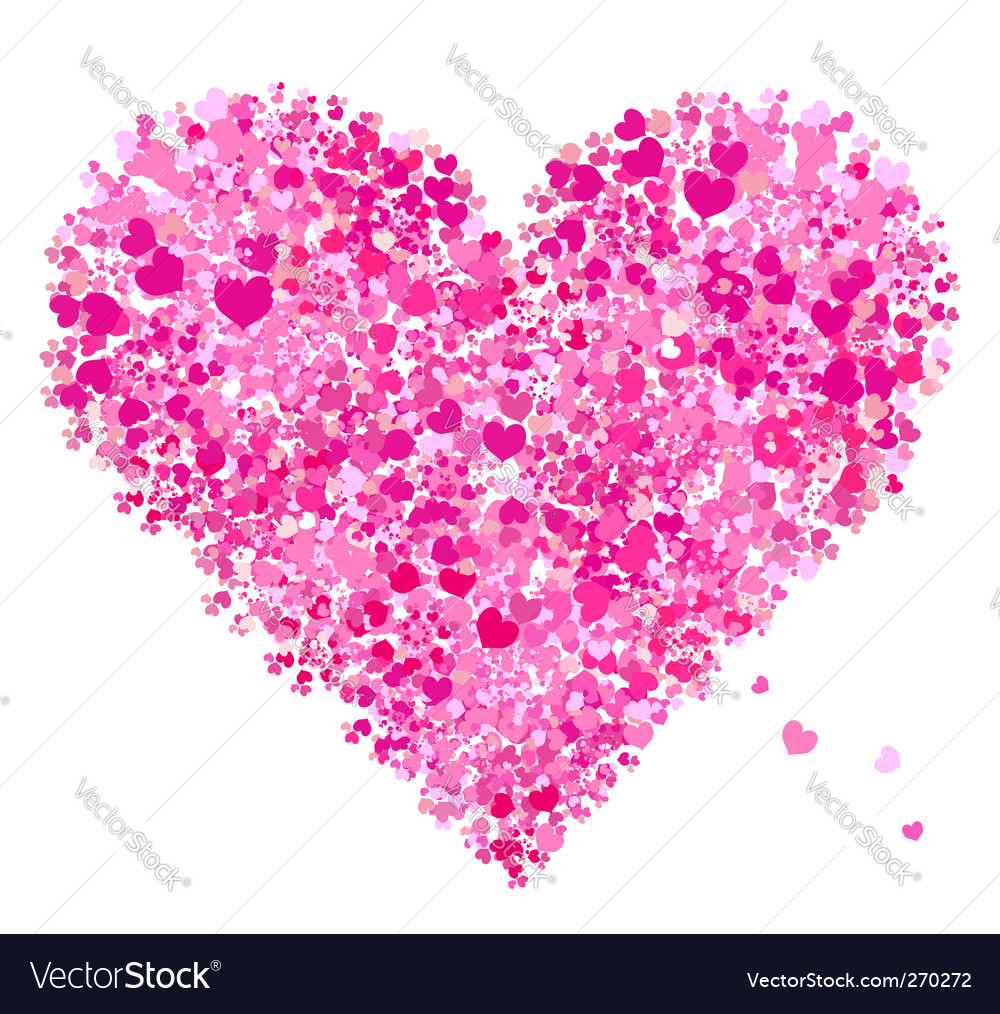 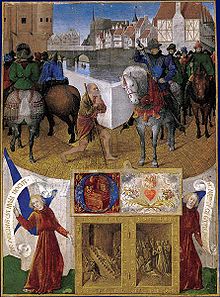 The Charity of St. Martin, by Jean Fouquet 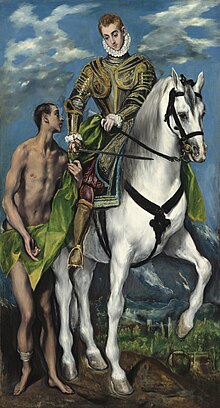 While Martin was a soldier in the Roman army and stationed in Gaul (modern-day France), he experienced a vision, which became the most-repeated story about his life. One day as he was approaching the gates of the city of Amiens, he met a scantily clad beggar. He impulsively cut his military cloak in half to share with the man. That night, Martin dreamed of Jesus wearing the half-cloak he had given away. He heard Jesus say to the angels: "Martin, who is still but a catechumen, clothed me with this robe." (Sulpicius, ch 2). In another version, when Martin woke, he found his cloak restored to wholeness. The dream confirmed Martin in his piety, and he was baptised at the age of 18.[12]

The part kept by himself became the famous relic preserved in the oratory of the Merovingian kings of the Franks at the Marmoutier Abbey near Tours.[4] During the Middle Ages, the supposed relic of St. Martin's miraculous cloak, (cappa Sancti Martini) was carried by the king even into battle, and used as a holy relic upon which oaths were sworn. The cloak is first attested in the royal treasury in 679, when it was conserved at the palatium of Luzarches, a royal villa that was later ceded to the monks of Saint-Denis by Charlemagne, in 798/99.[17]

The priest who cared for the cloak in its reliquary was called a cappellanu, and ultimately all priests who served the military were called cappellani. The French translation is chapelains, from which the English word chaplain is derived.[18]

A similar linguistic development took place for the term referring to the small temporary churches built for the relic. People called them a "capella", the word for a little cloak. Eventually, such small churches lost their association with the cloak, and all small churches began to be referred to as "chapels".[