It rained and I cancelled the game.

I can hopefully enjoy the whole weekend.  It's supposed to be dry.  75 tomorrow, 58 on Sunday.

And then it will be in the 80s and 90 on Thursday.  I'll have my remote starter by then

It's going to rain ☔ any second now. Not going to be a lovely weekend here, I guess.

Have a baby 🚼 shower this afternoon. That will entertain me for a while.

I never thought about starting seedlings. It would def save.

Wind is an issue too. That thing would go flying I think.

I am only going to do basil and spearmint  for herbs, so I guess I don't need it.

@momtochloe helped me find raised gardens planters so my tomato 🍅 and zucchini will go in there.

If this weather doesn't break, @ChiliPepper and I won't be planting anything!!

I believe this is the last cool day for us.

People keep saying we didn't get a spring.  I think people forget what spring is like.

As long as it's not humid, I'm happy.

I'm glad I can finally buy some hanging pots for outside.

It is a beautiful sunny day here today although it is a tad cool but it is spring.

Watching the Food NetWork this morning-have had cocktails with Trisha and now margaritas with The Kitchen gang!   What a way to start a day!   Well, I had them in spirit with them but not in reality.

Think I am going to head back to Walmart to see if they have some geraniums in hanging pots and also to see what else they have added since I was there a few days ago.  I think people are going to be packing in all the places to purchase flowers this weekend-I feel like I am behind on getting things ready for the yard for spring and summer and just want to get it done.  ,

@ChiliPeppermy friend, let me help you with those what could considered to be noocks and crannies plus it blows away those pesty eyebrow hairs:

What brand is this?  I got my new Bed Bath and Beyond catalog yesterday and guess what was on the front cover?  Yes.  Hair removal devices.  Respect already told me about her epilator, so I thought I'd ask you about your device.

I am so sorry to hear that your brother has skin cancer.  I am praying for him for a total recovery.  Hugs ((( )))  to you all.

I am so sorry to hear that your brother has skin cancer.  I am praying for him for a total recovery.  Hugs ((( )))  to you all.

Thank you so much for your prayers.  I just spoke with my SIL and to him on the phone.  She says he is really down-not only is he concerned about the skin cancer, his best buddy in the world-more than a buddy-more a brother, isn't doing well.  I called to let him know there was an entire afternoon and evening of Willie Nelson on AXS tv on cable, hoping that would cheer him some.  Brother Mustang loves Willie, and he loves BB King.   I thought it might help him keep his mind off things to have something different to watch and I know he doesn't normally watch that channel.

I'm a little behind on responding to the Devil Dog posts, but I was going to ask if any of you Kitchenettes ever had a Dolly Madison French Pastry snack cake? 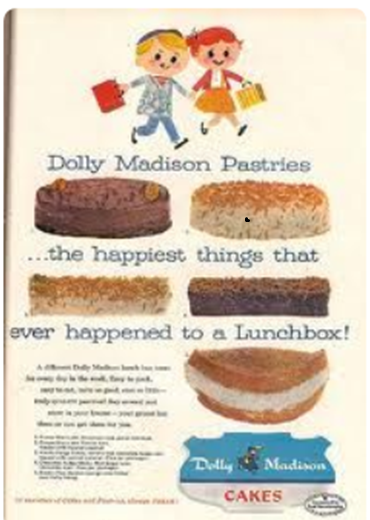 When I was a little kid, we used to get Dolly Madison French Pastries (see top right picture) from the local Dolly Madison Bakery.

The pastry (snacking cake) was about six inches long and was shaped like a football.

Originally, they only came in the vanilla flavor, but later a chocolate variety was added.  The original vanilla one had moist vanilla cake with a pocket of a fondant cream filling in the middle.  It was frosted with vanilla vanilla icing and originally had candy sprinkles on it.  Later they switched to toasted coconut.

That same company also made something called a Banana Flip.  It was a circle of white cake spread with an intensely flavored banana cream filling and then folded over.  (See the bottom right picture in the ad.)

I think Mrs. Baird made something similar to these two items.

Does anyone else remember eating these cakes?  They were on the market about the same time Zero Candy bars were out there.  I think I have mentioned Zero before.  A few years back, they brought it back on the market and you can order it from Amazon.

Here is a recipe I came across for making your own Zero bars: