Auto-suggest helps you quickly narrow down your search results by suggesting possible matches as you type.
Showing results for
Search instead for
Do you mean
Reply
Topic Options
Barbarainnc
Respected Contributor

My granddaddy made the best fruit dumplings. He'd roll out a pie crust and cut pieces big enough to line a cereal bowl and fold over to seal the bottom. He'd fill the crust with sliced apples or blueberries or blackberries. Any fresh fruit will do. Then he folded over the crust to seal in the fruit. He would place 6 or 8 in a 9 By 13 glass pan. Bake them  til the crust was brown. He would make a sauce with evaporated milk, sugar and cinnamon. To serve them, everybody got a bowl with a dumpling, break the crust a little and pour on some sauce. It was so good.

Re: My Granddaddy's Fruit Dumplings 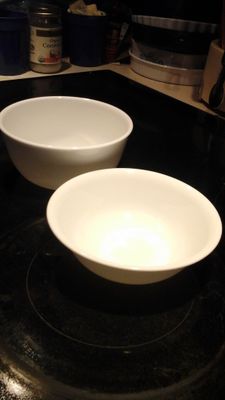 These are Corelle Bowls, I use the smaller one filled to the brim with fruit and fold over the dough.

Re: My Granddaddy's Fruit Dumplings

Sounds delicious! And what a wonderful memory of your Granddaddy!