Auto-suggest helps you quickly narrow down your search results by suggesting possible matches as you type.
Showing results for
Search instead for
Do you mean
Reply
Topic Options
Highlighted
SandPiper
Valued Contributor

When Ghost was a puppy, around 3 months old, he was found homeless in Florida. He is deaf, with white fur and brown eyes.

Ghost was deemed “unadoptable” because of an abundance of energy and occasional indifference to people. His deafness would also have required owners willing to learn new ways of communicating. In Florida, young Ghost was scheduled to be euthanized. Swamp Haven Humane in Florida wanted to give Ghost another chance at a forever home.

So they reached out to several animal shelters around the country, including Olympic Peninsula Humane Society in Port Angeles, which agreed to take him in.

Olympic Peninsula Humane knows by now to reach out to Barb Davenport when they have a high-energy puppy. When no one showed interest in adopting Ghost, they called Barb.

Barb started handling dogs when she was a little girl, only 10 years old.

She participated in American Kennel Club conformation and junior showmanship as well as the 4-H dog programs -- then joined the U.S. Army in 1975. 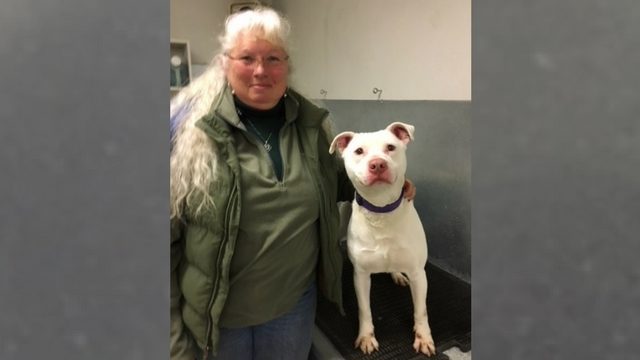 Barb Davenport with Ghost. From Washington State Department of Corrections

She enlisted in the military specifically to become a K-9 handler, officials with the Washington State Department of Corrections said. In 1979, she became one.

Barb said she feels the best part of her job is taking dogs who might not be able to find forever homes, and working to help them become important members of their communities.

When she met Ghost for the first time, “he was very focused and determined to locate his ball when thrown or hidden,” Barb said. She felt he could be a good K-9.

At this point, Barb has trained over 450 rescued dogs into narcotics dogs. All of the Washington state DOC’s K-9s are originally from shelters.

Now 2 and a half years old, Ghost lives with his new handler, Joe Henderson. Ghost is in training as a narcotics detection dog for the Washington DOC.

He’ll be with Henderson for the rest of his "forever," helping to serve the community as the first deaf dog in Washington state's K-9 history

Sometimes the strength within you is not a big fiery flame for all to see. It is just a tiny spark that whispers ever so softly "You Got This - Keep Going"
Report Inappropriate Content
Message 1 of 16 (588 Views)
Reply
20 Hearts
Highlighted
IG
Honored Contributor

Having a rescue that had been found burned and animal control deemed him 'unsalvagable' because of the expense to treat his burns, a local rescue group stepped in and had him treated.

He's my avatar Kingston and even with some scarring, we think he's just beautiful and is so sweet & trusting!

You never know how strong you are until being strong is the only choice you have.
Report Inappropriate Content
Message 2 of 16 (571 Views)
Reply
6 Hearts
Highlighted
OKPrincess
Esteemed Contributor

Having a rescue that had been found burned and animal control deemed him 'unsalvagable' because of the expense to treat his burns, a local rescue group stepped in and had him treated.

He's my avatar Kingston and even with some scarring, we think he's just beautiful and is so sweet & trusting!

That saddens me about your Kingston but bless you for taking a chance on him. And bless those who care for Ghost. I just don’t understand heartless people.

Neither do I and I never will. But there's a special place waiting for them........

You never know how strong you are until being strong is the only choice you have.
Report Inappropriate Content
Message 4 of 16 (543 Views)
Reply
2 Hearts
Highlighted
OKPrincess
Esteemed Contributor

Neither do I and I never will. But there's a special place waiting for them........

Yes there is. Take care.

Rescue Angels
Tail tucked between your legs,
Confusion in your eyes -
I know it's hard to understand
That someone heard your cries.
When loneliness is all you know
And pain is all you feel
And no one can be trusted,
And hunger's all too real...
That's the time the Lord sees you
And lets you know He's there
That's when He sends His messengers
The hearts that love and care.
Yes, rescuers are angels
You cannot see their wings,
They keep them neatly folded
As they do their caring things.
The medicine to make you well
Good food to make you strong,
And finally to help you learn
That hugs are never wrong.
The perfect place then must be found
The home where you can live
Secure and safe and happy
With joy to get and give.
When you reach your Forever Home,
Your place to feel whole,
The Angels smile, and off they go
To save another soul.
~Author Unknown~
You never know how strong you are until being strong is the only choice you have.
Report Inappropriate Content
Message 6 of 16 (495 Views)
Reply
6 Hearts
Highlighted
SandPiper
Valued Contributor

@IG there is a special place in heaven for people like you. Just like there’s a  special place for those who abuse an innocent animal. Your Kingston is a heartbreaking story but with a very happy ending. I bet Kingston is king of your family.

We rescued Bonnie, a mixed breed, beagle and ???? She was running around the supermarket parking lot with a belt wrapped so tight around her neck. She was going up to everyone coming out of the store, probably looking for her owner. The people were kicking her and pushing her away. My DH and I could not walk away and leave her there. We waited for awhile to see if someone would come for her but we knew nobody would. Without any trouble she came with us and on the way home she rested her head on my lap. Bonnie was so sweet and loveable and we loved each other for 18 years. She is now at the rainbow bridge playing in the meadows and basking in the warm sunshine. I still cry when I think of her.

@OKPrincess I too cannot understand how anyone can be so heartless and abuse God’s special furry and not so furry creations.

Sometimes the strength within you is not a big fiery flame for all to see. It is just a tiny spark that whispers ever so softly "You Got This - Keep Going"
Report Inappropriate Content
Message 7 of 16 (479 Views)
Reply
6 Hearts
Highlighted
IG
Honored Contributor

My place in heaven will be right next to yours!

We'll meet at the Rainbow bridge, to be reunited with our lost fur loves!

Bless you for saving sweet Bonnie, giving her a good life and showing her that not all humans are cruel and hurtful.

You never know how strong you are until being strong is the only choice you have.
Report Inappropriate Content
Message 8 of 16 (467 Views)
Reply
5 Hearts
Highlighted
goldenlocks
Esteemed Contributor

My Eddy, I guess, was considered "unsalvageable" by the NYCAC.  He was dragging himself on a sidewalk in Manhattan so picked up by them.  Just in the nick ot time, Second Chance NYC pulled him off the euth. list.  Eddy, f/k/a, Shadow, was brought to their surgeons - he had a broken spine - and underwent surgery which repaired his spine.

His first fosters had a dog - the two of them didn't like each other.  So, Eddy went back to the rescue.  A guy who had never had a dog then took Eddy because his shrink said it would help him.  The rescue pulled him after two days.  Eddy was back in the hospital in a lot of pain - again.

The rescue posted a video of Eddy walkiing and pics of him when he was paralyzed. They stated he was 30lbs and 10yrs old, a black lab mix.  I had just lost my precious Jade and was heartbroken.  I commented wish I could take him as we could help each other, but couldn't afford to adopt at the time. Everyone said to put an app in to foster, so I did.  Well, ten days later, Eddy was brought to me.  He was taking lots of meds every twelve hours and could only walk up three steps.  In talking with the techs at the hospital in NYC, found out something also happened to his mouth, but they worked on his teeth and did the best they could.  Anyways, for months Eddy and I helped each other and hung together twenty-four/seven.

Today, I have one super happy, friendy, outgoing little man (going on ten - age and weight were wrong) and we're still together twenty-four/seven.  He endows me with hugs, cuddles, and lots and lots of doggie kisses!  Eddy has made enormous improvements - he's very outgoing, loves people, and has finally realized that's he's a very precious soul.

Oh, by the way, I flunked fostering:  I became Eddy's official Mommy about two months after he came here.  When I told  him it was official he was overjoyed and there was much hugging and kissing!

Eddy and I are one happy family.  We're very lucky to have each other.

It angers (angers is not a strong enough word) that anyone can harm and abuse any living creature.  Imo these scums who do vile things should be punished by having the same done to them:  an eye for an eye.  Only the vile, souless evil amongst us can do such abuse and should be punished in a likewise manner.  The courts/laws don't deter this type of scum; however, the fear of being abused in the same manner may put an end to all abuse.

Anyways, it breaks my heart that such abuses occur and I'm grateful that there are so many wonderful people out there rescuing and loving our furbabies.  Somehow society must put an end to these abuses.  I also consider anyone dumping a furbaby due to age is a form of abuse.

You're an earth angel and Eddy is so lucky to have found you!

Wishing you and Eddy many, many more years of love, devotion and happiness together! You never know how strong you are until being strong is the only choice you have.
Report Inappropriate Content
Message 10 of 16 (294 Views)
Reply
2 Hearts