A ‘unicorn’ puppy who was born with one ear that is placed near its forehead is the latest social media star, attracting millions of views on TikTok.

Rae - ‘ear’ spelled backwards - is a golden retriever who was disfigured after falling critically ill just after being born.

After being treated at a veterinary hospital in Grand Rapids, Michigan, was adopted by a receptionist who worked there, Brianna Voorhees.

‘Breeders surrender (puppies) to vet techs often if they can't take care of them full-time.

I said if a golden retriever ever comes in, I'm going to want to take care of it and raise it.

‘When they found out she'd need 24-hour care, I have a heart for golden retrievers, and I just knew that she was meant for me, essentially.’

The breeder believes that Rae’s deformity was a result of his mother cleaning off the placenta or amniotic sack too aggressively.

Rae’s entire ear was gone, save for the canal with all of the skin peeled off.

The dog was rushed to hospital for surgery hours after being born. It was uncertain if the animal would survive.

‘She was really in a fragile state, we didn't know if she was even going to survive beyond 48 hours,’ Vorhees told CNN.

After round-the-clock care, she managed to make a full recovery.

Rae was left with one ear that sticks out of her head.

‘We're assuming because of the sutures is why the ear migrated to the top of her head,’ Vorhees said.

‘I think as her skin grew, and she started to grow, that it just kind of migrated up there.’

The dog became a viral sensation. 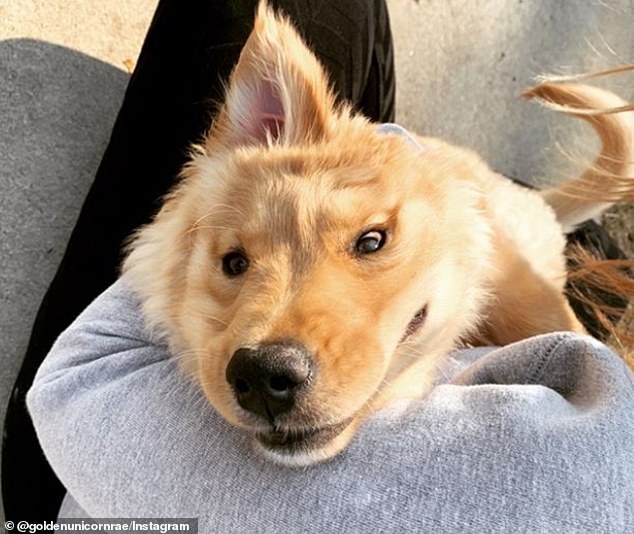 You never know how strong you are until being strong is the only choice you have.
Report Inappropriate Content
Message 1 of 5 (578 Views)
Reply
18 Hearts
Highlighted
Laneysmom
Contributor

IG......thank you sincerely for taking Rae into your heart and your home. You are both truly blessed to have found each other. Rae is adorable!!!

Rae is not my baby, but I would gladly have taken her if I had the opportunity, I always gravitate toward the 'underdog'!

This is an online story about Rae and the wonderful woman who WAS able to add her to her life and home!

You never know how strong you are until being strong is the only choice you have.
Report Inappropriate Content
Message 3 of 5 (411 Views)
Reply
4 Hearts
Highlighted
Jtdmum
Trusted Contributor

My BFF just lost her Golden to Metastatic Melanoma.  Horrible disease.  He also had a shrunken ear, result of an ear infection/meds when he was a pup.

Wonderful dog!  Hope Rae has as happy a life as can be!  Looks like a sweetie, beautiful face.

I saw Rae on the People Magazine Instagram page a couple of days ago and started following her. She's so cute.