Hilary Swank delivers small lap dog, 15, back to its owner... after rescuing it in New York while on location for a new movie 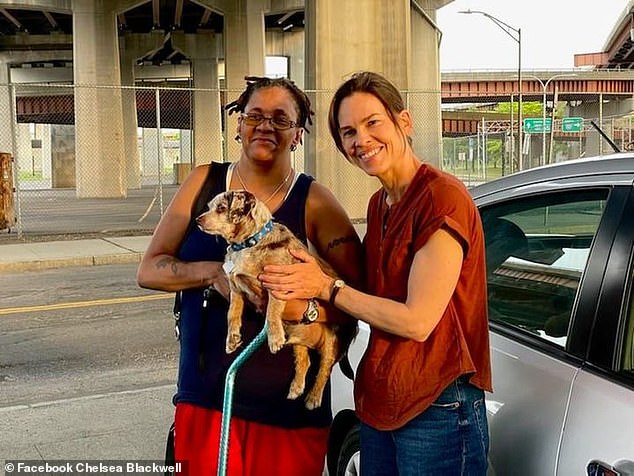 But when she came upon a line of squad cars and people with cameras near the Greyhound bus station in Albany, New York, she set aside her search to investigate.

'I noticed there were like eight police cars and people with cameras - I thought maybe somebody got shot,' Blackwell told her local paper, the Times Union.

Fortunately, tragedy did not lurk. Blackwell had stumbled upon a movie crew, but ended in a one-in-a-million lucky happenstance.

Long story short: Her dog of 15 years was found by a movie star with a history of rescuing dogs.

You won't believe this, the crew told her, but a celebrity had found her pooch.

'I asked them if anyone saw a little brown dog, and they said, "Yes, we'll call her."'

An hour later, a gray car pulled up, and there was tiny Blue sitting in the lap of two-time Oscar-winner Hilary Swank

Blackwell asked Swank for her autograph, but Swank did better: They took a picture.

The Million Dollar Baby herself!

You never know how strong you are until being strong is the only choice you have.
Report Inappropriate Content
Message 1 of 5 (738 Views)
Reply
24 Hearts
Boomernichols
Respected Contributor

@KingstonsMom There is still kindness ro be had in this world and shared.  I love this story that Hilary took the time to rescue the dog and see that the owner was reunited with her companion.

"If you walk the footsteps of a stranger, you'll learn things you never knew. Can you sing with all the voices of the mountains? can you paint with all the colors of the wind?"
Report Inappropriate Content
Message 4 of 5 (649 Views)
Reply
7 Hearts
MrsSB
Super Contributor