Auto-suggest helps you quickly narrow down your search results by suggesting possible matches as you type.
Showing results for
Search instead for
Do you mean
Reply
Topic Options
Krypto
Trusted Contributor

@this is my nic   My Jack Russell chewed the skirt on my sofa and chair looking for his ball. Spray didn't work, pepper either.
I bought a scat mat that plugs in and has a mild electric charge from the pet store. It kept him out of the living room He didn't even put a paw on it must have felt the static electricity.
When I got a new sofa and another Jack Russell I placed it between the foyer and living room. She would just jump over it! Then would sit on the white sofa.

So, I'm using expensive wooden decorative gates. it works for her but she's not a cat.

A mat could be placed on the chair or sofa, they come in different lengths. They don't harm the animals.

@this is my nic   I just wanted to say please don't spray your cat with water.  I noticed it had been recommended twice and just had to jump in.  There are many articles from cat behaviorists explaining why this isn't a good idea.  This is an excerpt from one article that I found.

So what happens when you use a spray bottle, or other method of punishment that comes from you?

I hope this is helpful.  My cat uses his scratching post all the time.  I have several around the house, but he likes his tall vertical sisal post the best.

Thanks for posting this, @NickNack.   I understand that people who love their cats and who only want what's best for them are tempted to use the spray/squirt bottles... and it seems to work sometimes...  but really all it teaches the kitty is to be afraid of us when we hold the bottle, it's only a method that might work when we're there at the time (it will have no effect on their behavior in our absence), and they see it as an extension of us.   The water "strikes" them as much as any other weapon, and that's confusing to them and makes them want to withdraw from the human attached to the device.    It affects our loving bond.    Jackson Galaxy often addresses this, in a compassionate and friendly way.   Thanks, again, for sharing this.❤️

(My kitty prefers the corrugated cardboard scratchers, by the way.    Since I added a few of those they're the only things she scratches.😻)

@this is my nic

Haven't read the thread past your OP, but healthy cats WILL scratch. Your job is to provide approved scratching points in the house, while discouraging scratching on non-approved items.

You're already aware of spray on deterrents.

I have 4 scratching posts in the house and a couple for the outside cats, too.

Make scratching posts by wrapping a length of 2x4 wood with sisal rope. Not the small craft making size sisal. You'll have to visit a big hardware store to compare sisal sizes and get the right one.

I secure the bottom row with duct tape, then tightly wrap the sisal leaving no gaps, and secure the top.

Your cat should be able to stand upright, stretch it's front paws as high as it can reach, and then add at least 4 more inches of sisal wrapping to that. Most that aren't home made are too short!!!

If you live in a house with vertical support posts in the basement, wrap at least one of the posts. I have a support that's wrapped starting a couple feet off the floor but all the way to the top of the post. One cat is a climber, and that higher wrap makes her happy.

You can also use leftover sisal to lash a sisal wrapped 2x4 to a vertical basement support.

Or leave a wrapped post on the floor, see if they can master standing on it and scratching at the same time.

Favorite cat toys with a bit of the loopy Velcro sewn on can be made to 'stick' to the sisal.

And rub dried catsnips deep into that sisal!

Now, here's the part most people overlook, because it sounds silly.

Kittens/cats will scratch on this post if you do.

I put my first post in a much travelled halfway. Every time (yes, every time) I passed thru this hall I paused and demonstrated, (without actually scratching).

ok i admit, i said the words

"scritchy-scratchy" as i pretended to scratch.

After a few weeks of this, he was pausing at the post to scratch without being prompted. I could stand at his side without pretending to scratch too.

I still said "scritchy-scratchy" whenever he scratched at any scratching post, and that proved to be a reinforcing phrase for the next 20 years.  This guy NEVER scratched where he wasn't supposed to.

4years later, he taught his sister, but she's hardheaded and has lapses.

Oh I love Maine Coons. I had a cat that was part Maine Coon and he was the sweetest most loving cat ever. But to your problem. I purchased double sided tape strips from PetSmart and put them on the sides of the chairs where my cat scratches. They don't like that as they tend to get their claws caught. A few times after this happening and they stop.  I think you can find them in the cat section. Try the tape on a piece of the chair not easily seen to make sure it will not damage the fabric. Good luck.

One of my cats considers the tape a game! I thought I had found the answer to the furniture scratcher until I woke up and found it all scratched off and in little balls on my hardwood floors! 🙄 ........Still ❤️ Little Halo! But may want to rethink his name! 😻

Thank you!  I just received the stinky spray that I ordered from Amazon;  one of the people here commented that it has the same ingredients as Barricade, which I've used successfully in the past.  It definitely smells exactly the same!  I've covered the chairs with sheets and sprayed the sheets.  Next step is removing the sheets and spraying the furniture.  I have sprayed a small area of the upholstery to be sure it wouldn't stain, it doesn't.

Thanks to everyone for the helpful suggestions!

Walter, the cat, can't seem to get interested in scratching posts or a scratching mat.  I think he did use the corrugated cardboard scratch boards in the past, so I'll get more of those.

I once had a rescue cat from a shelter who was PERFECT, except for her scratching habits (probably why she was relinquished).

She did such a job on our leather sofa, I had an upholsterer cannibalize the matching love seat to repair it.  BUT not before trying Soft Paws.

Watched the vet put the first set on, and did them later by myself.  Shadow wasn't crazy about it, but allowed it.  One warning: they usually shed off naturally, but we once had one that grew around with the claw - another vet visit to remove it, as we were a bit leery of hurting her.

OK, here's my last suggestion that was done with two previous cats.

100 yrs. ago a neighbor in my apartments threw out this two-seater wooden bench/chair thingy that was really cool.  I snatched it up, recovered the fabric back/seat about 5 times and still own it today.  At one point the upholstery was a burlap-type print.

The cats adored it as a scratching post even though they had several commercial posts.  So it became "theirs".  lol

What I haven't done for my cats...

Update on my cat scratching problem.

I sprayed the entire living room with the stinky spray, the same formula that worked in the past.  Smelled the same to me.  Then for extra protection, both chairs were covered with sheets.  Thought my new chairs were safe.  Ha!

Today, I thought the sheets had been on long enough and hadn't seen Walter,the cat, near them, so off went the sheets.  Both chairs had been scratched!  He reached up under the sheets and went to town.  Fortunately, clipping the loose threads helped hide the damage.

Many people suggested using tape either double sided packing tape or the special tape that's made for this problem.  I think I'd have to cover every square inch with tape!

This isn't my furniture, but I might be pushed to do this! 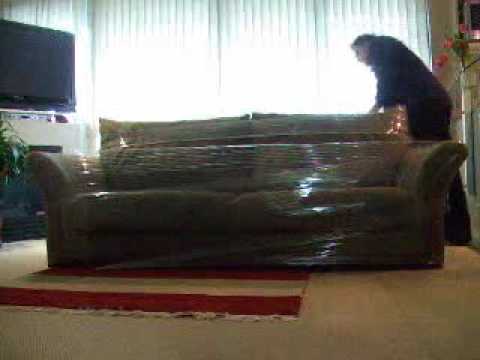 @this is my nic   I'm sorry the spray and sheets didn't work for you.  I'm sure you're beyond frustrated.

My little dog, a heartbeat at my feet. —Edith Wharton
What greater gift than the love of a cat.--Charles Dickens

My mother-in-law, who had never had any kind of pet in her life came here once, saw that our cat had scratched the sofa and told me to sprinkle it with black pepper.....like wth.

I just looked at her and said no.  Who's going to clean that up.