Auto-suggest helps you quickly narrow down your search results by suggesting possible matches as you type.
Showing results for
Search instead for
Do you mean
Reply
Topic Options
Highlighted
NickNack
Honored Contributor

Last December Frankie, my French Bulldog, started having an eye problem with her right eye.  She was keeping it shut most of the time.  I took her to my Vet, who referred her to an opthalmologist at the Vet School.  She has episclerokeratotitis, which is an immune mediated disease.  It was pretty bad by the time I took her in.  I just didn't realize anything was going on.  Since December she has been on and off of steroid drops and other drops when trying to get off the steroid drops.

She seems to be able to stay off the steroid drops for a short time only.    Her last appt. was in September.  Last night I noticed she was blinking that eye again and keeping it closed for a while.  I will have to call and make an appt. for her with the Vet School.  Her appt. isn't until December 20th.  They were hoping she could use only the Tacrilimus drops without the steroid, but apparently it isn't strong enough to keep her disease at bay.

I hate this for her.  The Vet school is great and gives her a very thorough exam.  I'm thankful that we have them, but I really hate that this is happening.

I'm really just posting this because it's on my mind.  I am curious, though, if anyone else has ever been through this with one of their pets.

@NickNackFrankie has such a loving mom with you. I can only imagine the stress and worry you have for your fur baby.   My girlfriend had a pug named Buster and he had to have the steroid drops off and on throughout his life.  His eyesight did diminish when he got older but he could still see.  He lived to 13 years old, he was a wonderful boy.

@NickNackFrankie has such a loving mom with you. I can only imagine the stress and worry you have for your fur baby.   My girlfriend had a pug named Buster and he had to have the steroid drops off and on throughout his life.  He's eyesight did diminish when he got older but he could still see.  He lived to 13 years old, he was a wonderful boy.

You never know how strong you are until being strong is the only choice you have.
Report Inappropriate Content
Message 4 of 13 (303 Views)
Reply
3 Hearts
Highlighted
Major Shopper
Frequent Contributor

@NickNack   So sorry to hear about your sweet Frankie! Our Suzie just went blind secondary to glaucoma and it took her less than a week to adjust. Dogs are amazing! She does so well that sometimes we forget she is blind!

As Frankie's eyesight is diminished, the key is to NOT change anything in the layout of your home. Also, routines work very well.

Hopefully, your Frankie will be able to retain sight. It is heartbreaking for us to watch in our babies, but they are very resillient and teach us to be too!

Best of luck with your precious pup!

Thank you @IG  and @Major Shopper .

@Major Shopper   Frankie's disease is only in her right eye.  They don't think it will transfer to her left eye, so I don't expect her to ever be completely blind.  It is amazing how resilient our babies are though.  I'm so glad your Suzie was able to adjust.

We had a rough collie, Fergus, who had to undergo several surgeries for cherry eye--difficulties with the third eyelid.  It kept recurring until our vet performed a procedure that nipped it in the bud once and for all. He was a big boy, 140 pounds of quaking fear heading into these procedures.  It killed me to see this majestic dog this way.

As a pet parent to dogs and cats for too many decades to write here, I empathize with you completely.  We don't want them to hurt or be compromised in any way.  I think--no, I know--it hurts us more than them.

To lift your spirits and for good luck for your Frankie, two pictures below:  The first--our cherry eye collie Fergus. No longer with us but lodged in our hearts forever The second, your Frankie's feline namesake, our cat Frankie (Miss Francesca, formally).  She has triaditis and is now dealing with a sprained elbow.  But she's glamorous as always. 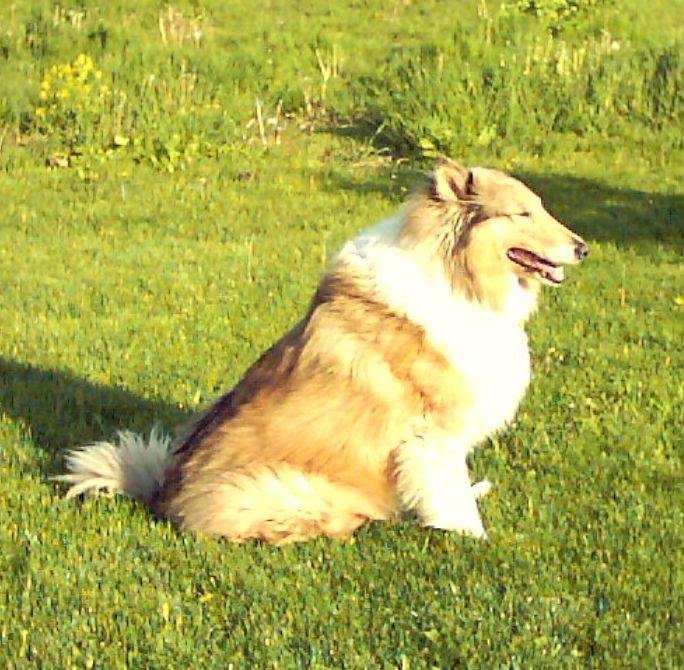 Frankie (Miss Francesca), tucked in after bout with liver failure: 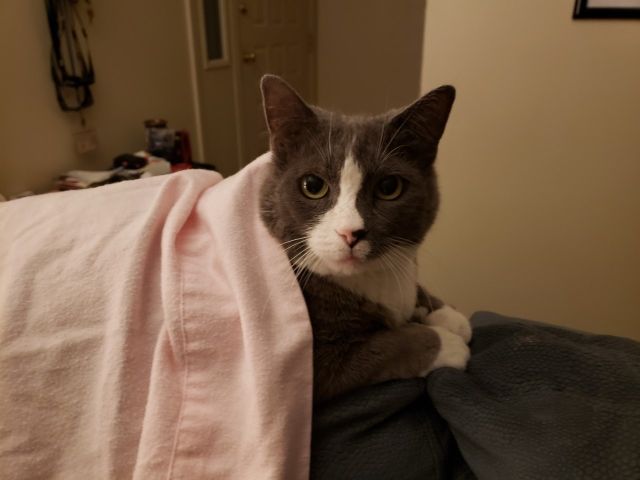 @Sammycat1   Fergus and Frankie are beautiful!  I'm sorry that Fergus had to go through several surgeries.  I'm so glad to know someone else who has a Frankie who's a girl.  Most people assume my Frankie is a boy.

I was walking her one time, and someone asked me her name.  I said it was Frankie, and they looked at her collar, which had a bow on it.  They said, "Oh, he even has a bow tie on his collar."  It was a pretty femine bow that I had bought primarily to identify her as a girl.  LOL!  I didn't even correct her.  We were out of town, and I knew I'd never see her again.

I had to look up triaditis.  I'm sorry to read that Frankie has that.  How old is she?  She looks young in her picture.

Frankis is pretty young -- 6.  She and another cat we adopted a few years ago were rescued from a hoarder's home.  It killed their immune systems, resulting in all sorts of problems. No matter:  we love them and are in it for the long haul.

We have the same issue with our Frankie and people mistaking her for a boy!  Sometimes a new vet tech or assistant will say, "Let's weigh him" at the beginning of a vet visit and we have to remind him or her that Frankie's all girl.  She even loves watching Jewelry Television and Star Trek (she is smitten by young William Shatner as Captain Kirk.  Well, heck, so am I!  So we watch together while DH rolls his eyes).

Triaditis is nasty.  First she appeared to have IBD.  Then we had two bouts of liver failure.  Then in September, it attacked her pancreas, resulting in chronic pancreatitis. She is a trooper through it all.  Maybe it's her world champion snoozing skills that get her through: 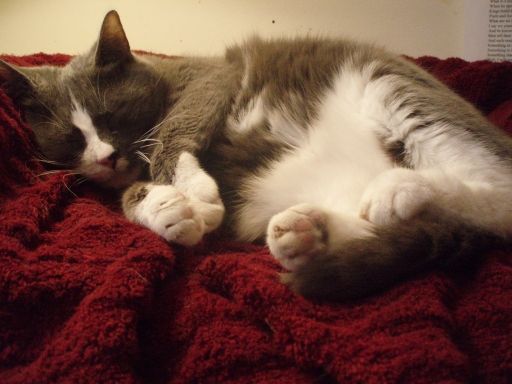 @Sammycat1   Animal hoarders are awful.  I'm glad you were able to take two of them.  I hope all of the cats were taken away and the hoarder is unable to have cats from now on.

I hope Frankie and your other cat from the hoarder are able to overcome their health problems.  I'm sorry for what Frankie has been through.