Auto-suggest helps you quickly narrow down your search results by suggesting possible matches as you type.
Showing results for
Search instead for
Do you mean
Reply
Topic Options
Highlighted
NickNack
Honored Contributor

Do Your Cats Respond To Catnip?

I have some very good quality catnip that I recently put in a couple of refillable catnip toys for Henry.  He jumped up on my counter and started sniffing at the can the minute I put it down.  He doesn't seem to react to the toys now that I put it in them though.  I can smell it in the toys, but he doesn't seem to be able to.

Where do you all put the catnip?  I did read that kittens don't react to catnip until they're six months old.  Henry is ten months old.  Should I rub the catnip on the outside of the toys?  I'm starting to wonder if he just doesn't respond to catnip, but he did jump up on the counter when I opened the can.

"Never argue with a fool. Onlookers may not be able to tell the difference."
Report Inappropriate Content
Message 2 of 22 (483 Views)
Reply
6 Hearts
Highlighted
CoffeeNut
Super Contributor

My cat is 7 years old and still responds to catnip.  I have a soft plush cat toy that has a velcro opening on the side that I put it in.  Usually refresh it once a month.

I have two fur babies and both go nuts over catnip.  I have a couple of scratching posts and I put a small amount on my hands and rub it on the post and around the base.  They play and scratch the posts and are quite stimulated.  After a few minutes, they will calm down and take a nap.  They recognize the container the minute I take it out of the cabinet and will immediately run to the scratching posts.  I think they have an addiction problem.  Their ages are five and two.

The two cats I have now...well...Bill likes to eat some of it but his favorite snack like that is he likes to chew on REAL grass.

You can buy real grass at the Pet store.  I think it's the chlorophyl he likes to chew on.  He swallows a little of the grass but mainly likes to chew on it.  He makes a big mess on the floor (chopped up grass) but he loves it so much.  I buy it for him every few weeks.  Eventually, I just throw it away.

The girl cat (Katie) likes to smell the cat ******...we call it 'marijuanna (like it's spelled), making fun of it.  It doesn't make them crazy.  Although I have some funny pictures of Bill having gotten into the packages (sealed) of catnip!  He opened it up and is sitting in the mess with the package opened next to him....

I've searched high and low for some really, really good catnip (paid a pretty price for it).  But still haven't found any that I think is really good.

So one of his favorite toys is (unfortunately) he loves those tiny little rats you get like 10 for a few dollars.  When I open the bedroom door in the morning there's one or two in front of the door (as a peace offering).  I find his balls everywhere (in the bathroom, you name it).  He's at least 7 or 8 years old and still loves to play.

Katie is afraid of everything and everyone (even me).  She watches Bill play but wants no part of it.

One of Bills favorite toys is this: 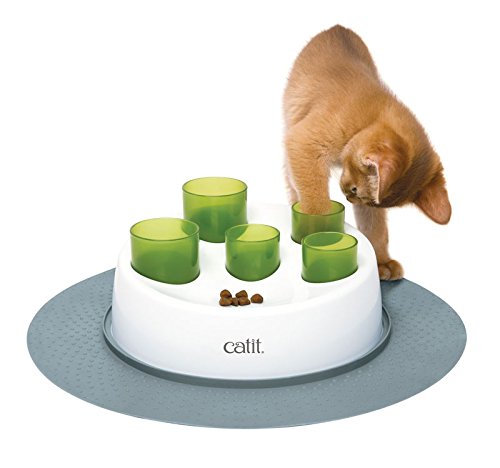 Bill reaches in a pulls out the goodies.  He loves it!

The cats I had loved the stuff and would demolish those fake mouse toys and eat the whole thing in a day.  I made some toys of doubled denim, little pillows, which I stuffed with catnip, then machine quilted so a hole made in one part would not empty all the catnip.  The cats loved my "pillows" and had no trouble smelling it even through double layers of denim.

My cats used to go nuts over catnip.  My mother's cats could careless.

Wow, my cats love catnip. I have live plants that they attack. They eat the leaves right off the plant. Anything and everything with catnip, my cats will respond. I know not all cats do, though, but mine can't get enough.

I was just thinking about this.

Cats I've had in the past went bananas over catnip.

My 18 year old will play with it sometimes. I've gotten the really good organic kind made in the US (hard to find) and fill it in some netting tied with a bow.

It seems she only responds to it the very first time I put it in, then leaves it alone for a month and may bat it around if I try to get her to notice.

I don't know why they sometimes do or not either.

Once I got her the cat grass and she had no interest but when she got outside once she wouldn't stop eating the grass! She totally ignored me until I put the tuna fish right near her and got her to come back in!

"If you walk the footsteps of a stranger, you'll learn things you never knew. Can you sing with all the voices of the mountains? can you paint with all the colors of the wind?"
Report Inappropriate Content
Message 10 of 22 (394 Views)
Reply
1 Heart