I still use those double edge blades to shave legs with , so, had them around. LOL

Used them since high school only can find them at Target.

King Arthur did me a favor and reduced my shp from 6 bucks to 3 think it was. Gadget just cost 9 and shp was 6 I wrote to them and said send me a promotion code like you always do saying 'We miss U'.

They did. LOL Reviews on it wasn't very good. Think people didn't know how to use it right was the main reason.

I should have it by end of week. They're speedy.

I bought one, save your money they don't work that well. Mine is French from France from Amazon, use a sharp knife. They say you have to know how to hold them, have tried different ways, like I said use a sharp knife.

Yeah, I read that on King Arthur reviews everybody was griping about not being sharp, but, then they would say they got cut when they tried to do something with it.

I thought why didn't you use a towel to hold onto the blade ? People are their own worst enemy just don't have any sense.

In the reviews the staff at KA tells people to watch the video on the proper usage of the tool. If mine does good, fine, if not only spent 13 on it, so, not gonna lose any sleep over it.

I made my own watching the chick on youtube it will be just as good just keep it in a cardboard sleeve , so, as not to forget I have it in my drawer and slit my finger open. Yikes ! I could probably just put on oven mitt and handle the blade, also.

Not sure what Martha uses but my man uses a dough scraper.  At least that is what he calls them.  He has 2.... 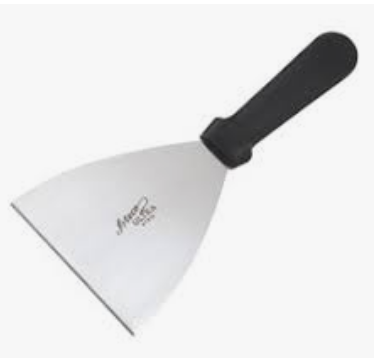 @Mz iMac I have something that looks like that in my toolbox that I use for spackling.  Hahahaha!

I think that's a paint scraper. I got a small version of it that I use on the Phillips grill panels to scrap off grease spots on the glass panels. only thing I could ever find that works on those **** things.  I wet down the glass reflective panels and scape gently.