I ordered a range from Best Buy.  Delivery was slightly delayed.  It's done well.  I had repair come because of an issue, but the issue was an insert I was using, so "user error".

I so relate to all of these stories.  I would just buy the cheapest replacement stove for now.  I bought a GE gas range from Sears waaayyy back with GW Bush's stimulous money.  It was the best investment I ever made!  Still works fine and looks new.

I had gone a year and a half without an oven.  When I got the new one, I couldn't believe how much I had missed it.

So I say if you want an oven and are used to using an oven -maybe even a used appliance place has a good one to sell you now, and you should get it.

I think you should buy an inexpensive oven until the time you can find what you really want ..... the price you are paying for the parts needed to fix the old oven just isn’t worth it .... then when you find what you really want you can sell the inexpensive oven or donate it to a needy family .... at least in the meantime you have an oven that works!!!!

I considered that, but it is only going to cost about $250 for fixing this one, and a new even cheap one will be way more. Plus, because it's propane, bringing in a new one requires the propane company to come and 'hook up and inspect' the new one, the delivery/sales company won't do that, and that is usually at least another $100. So it really is cheaper to fix this one, since I can't find what I want in a replacement.

It's definitely been a bit inconvenient, but even people we know that have bought new appliances are waiting three months or more on them. If you don't chose stuff 'in stock' the wait on many  new appliances is long too.

Well, that stinks, @mominohio. It does sound like you are doing pretty well though in spite of not having an oven. You are making lemonaide with the lemons, so to speak. Maybe you could make 'drop' cookies that you cook on stove? I know they aren't the same, but there are some pretty good recipes out there for those.

My son had to wait over 6 months for a part for his truck- the blower fan or something like that, the a/c and heater wouldn't work with whatever it was that was out. I worried because it wasn't working when it started getting cooler here and I knew he would need defrost to get to work, but luckily they finally got the part in. The people at the place he got the truck worked on told him that they were having a tough time getting parts in.

I was wanting to buy said son an upright freezer and had to wait several months on that. One appliance store said there weren't any for sale in all of Arkansas or Oklahoma, that was back maybe in march. I think it was July or August when the one I ordrered came in for him.

My dishwasher went out Thanksgiving and Thank God I was able to get one the day after, Lowes had plenty, dh had to put it in though because it was going to be at least 3 weeks until they could.

Hang in there, @mominohio until you can get what you want as far as those appliances go. Good luck to ya too. Hopefully soon someone will have exactly what you want.

I hate settling for something big, because I'll have to live with it forever.

Nice to know that you 'get it'.

At 60, I'm done 'settling'. I had to do it for years when younger and poorer. We keep our stuff for decades, if it will last, so I want it to be what I want, if at all possible. Therefore I'm ok with waiting for new, as long as I can, to have something I really want.

My husband will retire in between five and nine years. We have a car that is 15 years old, and still quite serviceable, but are considering a new one in a few years, to be paid off before he retires.

We went and looked at what I really want, a new Dodge Caravan. Had one years ago, and miss it so much. Well, they are no longer making them after 2020, and few left. Found one screaming deal on a left over 2020, but the interior was black on black, and the paint was black. I hated it. The inside was brand new and every little piece of lint and hair was showing on the carpet and the seats.  I hated it on the lot, and knew that even though it was such a great deal, I'd have to hate it and be frustrated by it for way over a decade. In the past I would have struggled with passing up such a great deal. Now I realize it really isn't a deal if I'm unhappy with some aspect of it for years on end.

It's good to know that your son waited that long on a truck part (not that I"m happy about it! lol). I guess it means "I'm not alone"!

Freezers were impossible to find in many areas. We were lucky, as we were able to purchase three small ones (5 and 7 cubic foot chest) at Sam's during this spring/summer. They seemed to get them in stock on a regular basis when no one else was. Maybe we just hit it on good days, as all were purchased at different times. 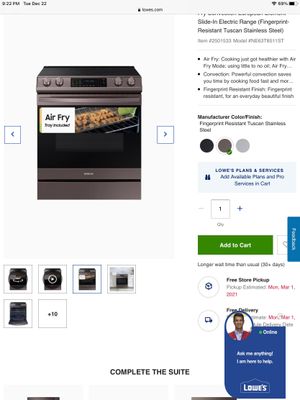 @mominohio  Not a specific answer to your question rather a global observation that in my opinion NOTHING is working even remotely 'right' since the onset of this situation.

As for new appliance colors, have you seen the 'black stainless' option. As a true foe of most stainless, I have to say I very much like it, so much so that I now have a black stainless microwave to test the wates over the long haul. 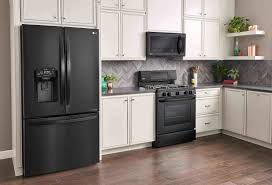 Had to get new cell phone my DD said don't bother going in the store (no stock) order it from Samsung, I like to see it before but guess times have changed. She helped me pick it out on line and glad she did. I like it but paying that kind of money I like to see it before. I understand we can take it back but still. My g/f waited 3 months for her washer, her daughter lives close by & she used her's. I hope none of any of my appliances break. Everyone is having a hard time waiting.

@mominohio  Not a specific answer to your question rather a global observation that in my opinion NOTHING is working even remotely 'right' since the onset of this situation.

As for new appliance colors, have you seen the 'black stainless' option. As a true foe of most stainless, I have to say I very much like it, so much so that I now have a black stainless microwave to test the wates over the long haul.

I have seen this. It takes two things I hate, black appliances and stainless appliances and mixes them into something that isn't nearly so hateful! LOL

I actually considered this as in some light, it comes off dark grey, a color I could use as it is found in small amounts in the counter top.

Again, not really want I'm wanting, but was so glad to see they branched out and were moving beyond 'the big three'! LOL

Yes, I want to buy a freezer and they simply aren't available anywhere.