Auto-suggest helps you quickly narrow down your search results by suggesting possible matches as you type.
Showing results for
Search instead for
Do you mean
Reply
Topic Options
idiotshopper
Contributor 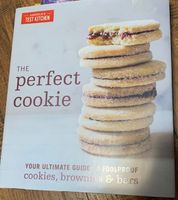 😊I have this book and it calls for butter in the recipe.

I make the King Arthur recipe, but replace the shortening with butter since I like a chewier cookie.  They still get crispy on the edges.

@jannabelle1 @idiotshopper I use the recipe from the book shown by idiotshopper.  I don't put in cayenne pepper but love this recipe and I do roll the cookies in sugar and then put on cookie sheet to bake. The do flatten out but it is definately a dough not runny like quick bread.  When you made half a recipe did you write the amounts down before making?  I find if I don't I put in a full recipe of one ingredient or another which spoils the recipe.

I just looked up four gingersnap recipes and they all called for Crisco (shortening) so........

The one from "The Perfect Cookie" cookbook uses brown butter and it is delicious.

I've always called them Molasses Sugar Cookies.  They are the same as Ginger Snaps.  Anyway,  I've been on a molasses cookie kick all summer for some reason.  They aren't normally a cookie that I would even think of making in the summer, as the spices remind me of fall.  I have several recipes in different cookbooks and decided to try them all to see which one I liked best.  So far I've tried two; one with butter and the other with Crisco.  They were both delicious,  but if I had to pick one, it would be the recipe with Crisco.  The Crisco recipe makes cookies that crinkle on the tops and that's what my mother's molasses cookies looked like.  Taste-wise, though,  they were pretty much the same.

So far, I haven't come across a recipe that called for oil.  If I had, and the batter was runny, I probably would have added a bit more flour.   The dough should be firm and not too easy to stir.