Auto-suggest helps you quickly narrow down your search results by suggesting possible matches as you type.
Showing results for
Search instead for
Do you mean
Reply
Topic Options
JavaQueen
Respected Contributor

The Return of 18K gold

I could not believe it. Since the beginning of the recession, I have not 18K rings. I have seen plenty of 10K, 14K, gold clad, gold/brass, bronzo, acrylic....(fill in blank.)

It was a chrome diopside ring in 18K offered on Jewelry Television. And it was well under $1k

This is a promising sign and those who weary of bronzo, clad and 10K, you should start saving your dollars for the good stuff. (That's if you don't own any 18K already). Because I think it's coming back into the mainstream.

I sure do hope so. All I can wear is sterling silver or 14 plus gold. But I think we are also going to see another recession. My wedding band & my mom's wedding ring those .20ct old rings were stolen along with a platinum ring with 4 vs I stones. I was at a MD appt't, DH & son did not get the BR furniture out in time. It was in the sidecubbard with my old camera , nanno's as I has just cleaned out everything. One box had knee high stockings, and the third scarfs. DH emptied the three boxes on the living room table to move it down and I noticed it immediately. I only had it out for my son's upcoming wedding. Those plain bands from late 60's early 70's were really heavy& solid. It was engraved but they easily polish it out since it was so old & engraving was not deep. No amount of money could replace them. DH didn't even approach the owner to see if he was an extra that day as he had so many jobs going. I have looked in several good jewelry stores for an antique replacement but have found none. Seems those old cut miner's stones are in great demand. I had bought the diamond ring for myself . SSDI. I have been saving every penny and getting stuff ready to sell. I know I won't ever see my rings again. He was referred by my SIL a detective so he wouldn't even make a call for a police report or the insurance company. I am still sick over it as I have not had my parents for over1/2 my life. Then I just pray and say it was only a thing and not my mom. So I wear nothing now on my ring finger, sometimes a little silver band. There was a silver lining as my elder sister had my dad's ring & I asked my siblings if they would mind if my son got married with it. They all said fine being he was the eldest grandson not married. I had it polished and it is heavy& looks like buttery yellow. Even the jeweler commented on it. So it was bittersweet to see my son wear my Dad's wedding band. He loves it so much , so some good things do come back around. When I see my son wearing it, it really touches my heart, and all is good again. PS: it won't stop me from saving my pennies. LOL.
Report Inappropriate Content
Message 2 of 6 (116 Views)
Reply
0 Hearts
songbird
Honored Contributor

That'll be the day when you can buy a 18K bracelet. ALL gold. Not just precious space that could have been gold but covered up with a semi precious gem. That ring is a start. I'm still a pessimist though. 14K is nice, but it's not really gold to me. It still will be a long, long time before that ever happens. By that time 1K will be the same value as $100.00 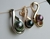 That'll be the day when you can buy a 18K bracelet. ALL gold. Not just precious space that could have been gold but covered up with a semi precious gem. That ring is a start. I'm still a pessimist though. 14K is nice, but it's not really gold to me. It still will be a long, long time before that ever happens. By that time 1K will be the same value as $100.00

That time is already happening. Just look at food prices in your local store.

It would be nice to see more gold jewelry offered again...14k or 18k. But with the 'improved'

manufacturing techniques, I wonder how thick the gold will be and how much of it will have a core of resin, to give it strength.