Auto-suggest helps you quickly narrow down your search results by suggesting possible matches as you type.
Showing results for
Search instead for
Do you mean
Reply
Topic Options
gardenman
Honored Contributor

For those who have been following on the other forum, I'm posting the photos of the recliner I bought through Amazon here. FedEx delivered the boxes at 2:15 PM and I had the pieces unboxed and fully assembled by 2:32 PM. The footrest release cable was the hardest part to do, and I had to get a pair of vise grips to lock in the tab on that, but all in all not too bad. One box weighed 64 pounds and contained the base. Box two weighed in at 61 pounds and had both arms and the back. The boxes were big and awkward and probably weighed in at twenty or so pounds for the cardboard and packing materials alone.

The chair is very, very nice. Very comfy. The "leather" feels like leather and not plasticky. The upholstery job is very well done. The chair feels very solid and well made. It's more of a gliding movement than a rocking movement, but I'm okay with that. The seat is said to be 21" wide and it is, but the padded arms intrude into that space leaving about 18" instead of 21". The office chair I'm sitting in now is 20.5" wide, and I have an inch or two on each side, so I'd assumed a 21" wide seat would be more than adequate. I fit in the chair just fine, but it kind of hugs me more than I'd anticipated due to the over-padded arms. If you're interested in the chair, keep in mind the open seat area is more like 18" wide than 21" wide.

All in all, I'm very happy. Here's a photo of the boxes as they arrived. 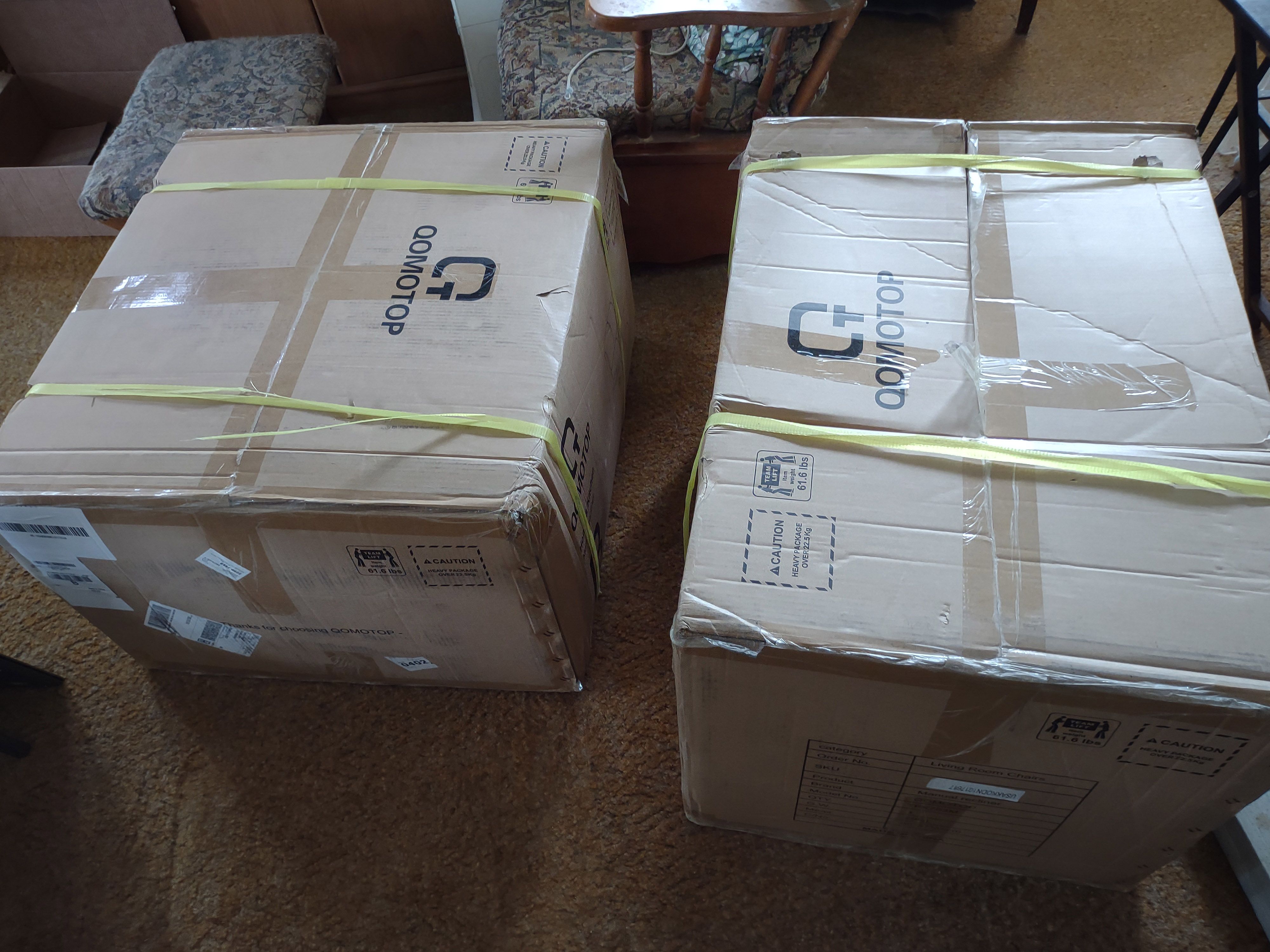 And here's the fully assembled chair. 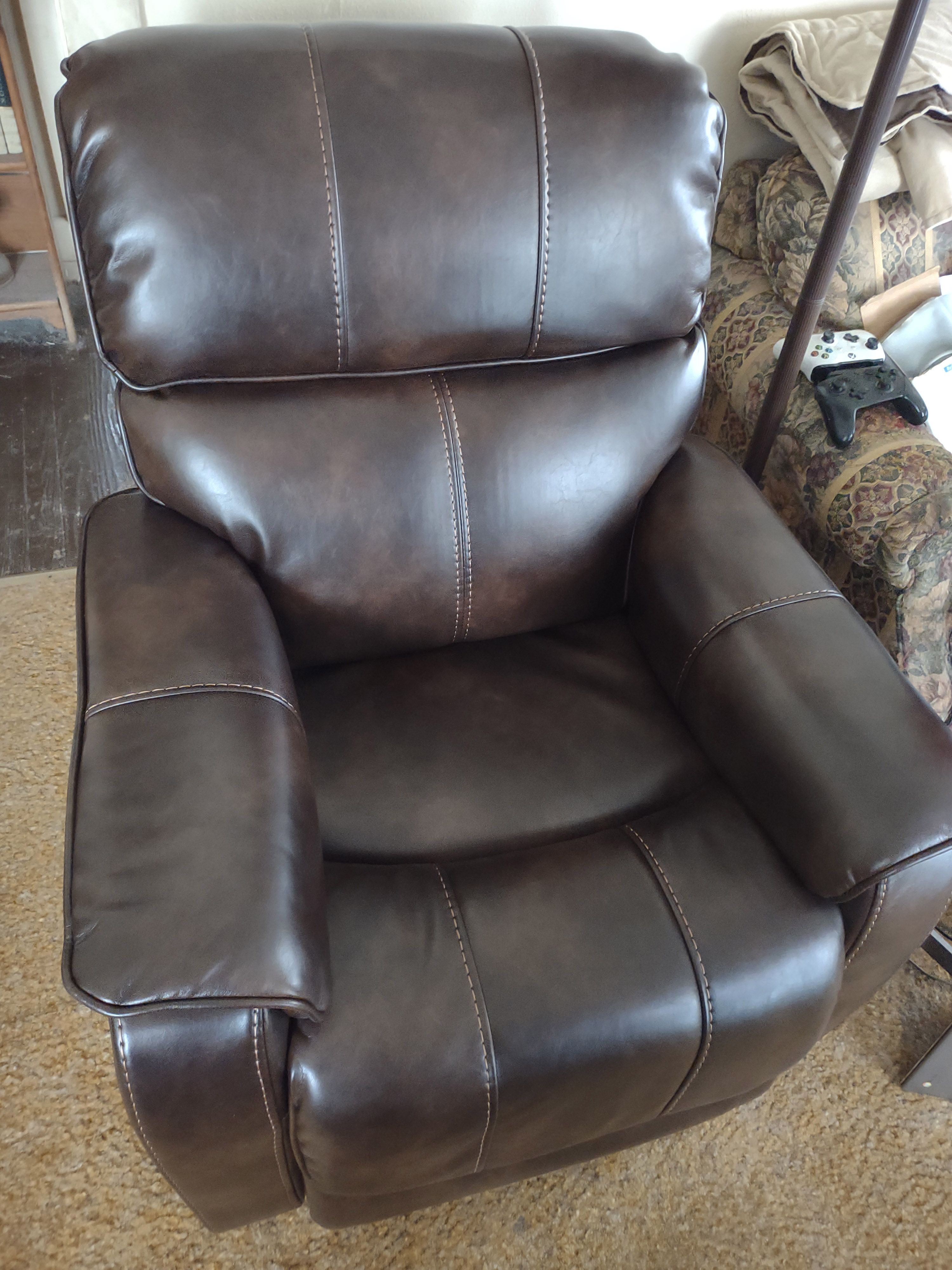 You can see how the arms overlap into the seat area. The seat itself is 21" wide, but the arms sneak in and grab three inches of that space. I don't think I could have done any better for $389. It's very nice. It's very comfy. Very well made.

@gardenman    The weight of those boxes is intimidating to me.  How hard were the sections to put together?

The chair looks very comfy, even with the intrusive arms overlapping.  Seems like a good buy.

@gardenman That's a handsome chair! The stitching detail adds so much.

My LazyBoy (Queen Ann style)  leather recliner also was packaged like that from the store. They do weigh a lot, but it makes moving them much easier when you know how to break it apart.

Glad you are so happy with your purchase.  Thanks for sharing pictures.

@gardenman    The weight of those boxes is intimidating to me.  How hard were the sections to put together?

The chair looks very comfy, even with the intrusive arms overlapping.  Seems like a good buy.

The sections were pretty easy to put together. They just slide together on rails. It would be easier with two people, one holding the piece and one positioning it, but I did it all myself in just minutes going by feel. It really wasn't a problem. Getting the clip in for the release mechanism was the hardest part. There's a cable that comes out of the right armpiece with a hook on it and a clip maybe ten inches up the cable. Hooking the hook onto the release latch was easy but squeezing that clip that holds everything together was tougher. I ended up using a pair of pliers (Vise-Grips) to get it into the slot. You're balancing the arm upright as you're trying to get that hook and clip in place and it's tough for one person to get it done, but I did it without too much trouble.

Probably ten pounds or more of the weight of each box is the box and packing material. They're big, heavy-duty cardboard boxes with more cardboard separating each component and heavy stock reinforcing the corners of the boxes. The single heaviest part is the base unit. That's almost all steel and very heavy. (Probably 50 pounds or more.) Each side arm piece may weigh15 pounds while the back might weigh 20-ish pounds. Once you have the base unit out, the rest is pretty manageable from a weight standpoint.

Good looking chair.  Now comes the hard part, getting rid of all that cardboard.  It seems never-ending.

Good looking chair.  Now comes the hard part, getting rid of all that cardboard.  It seems never-ending.

Yeah, the timing was especially bad as today was recycling day, so I've got to work around the cardboard for two weeks until the next recycling day.

That is a very nice chair!

The chair looks good, @gardenman  ! I couldn't have assembled it.

@gardenman  Me thinks there will be many naps taken in that chair! 😀  Looks great, enjoy!

I got curious and measured my old La-Z-Boy that this one replaces and that seat was 20" wide, so this seat is wider, but feels smaller since the arms intrude on the seat. I tend to pull a leg up under me when seated in the chair and this one just doesn't quite have enough room for that. If anyone is looking for a chair like this, understand you end up with about 18" of usable width in the seat, despite the seat being 21" wide. The things you learn.

That's one of the drawbacks of buying it online without being able to sit in it beforehand. The measurements they show are all correct, but you don't realize the arms intrude as much as they do. Still, it's a very comfortable chair that looks beautiful, is well made, and works well, so no big complaints. I'll just have to adjust to not sitting with a leg under me. It's probably better for me anyway.