Auto-suggest helps you quickly narrow down your search results by suggesting possible matches as you type.
Showing results for
Search instead for
Do you mean
Reply
Topic Options
Kitty Galore
Respected Contributor

I have several items from the Peony line and have been thrilled with the quality ,   But this arragement is not what was shown or Described as .    The vendor and Sandra Bennett went on and on saying that ALL the roses and foliage were the "real touch" application which I have and they do feel just like a real rose  petal .  Now on this  arragement ONLY the pink roses are real touch ,  the cream roses are paper feeling ,   Not even silk ,  if they are silk they feel like paper to me although pretty not what was described !   That is false advertising!    For the price of this item I'm not happy ,  $162.00 plus $19.00 s&h !!   I excepted to receive the item that was presented.  Now after saying all that it is impressive and is arranged beautifully!  And very large.   If you don't feel the roses it dose look totally real and the vase is heavy and very elegant looking .   I'm still debating as to sending it back and possibly request a replacement,  but wonder  if all of them are made this way and I would get the same thing back 😏  I did also write a review and will wait and see if anyone else has the same opinion as I do and what they received.   I just hate being mislead😡

Thats too bad and I dont blame you.  But why even consider keeping something that you dont really like, thats a lot of money.  Return them and consider call CS to see if you can be reimbursed for your shipping.

@Kitty Galore.  You won't get a replacement as the item is no longer available.  I'm sure they were all the same though.  If not 100% satisfied, I'd return it.

I would return it and state that it is defective and say why.  You should not have to pay all that shipping for, what I would consider, a defective item

I would definitely return it as defective and get your money back on the shipping.  It clearly states in the description that they are the real touch flowers.  It says nothing about the white ones being different.  That's a lot of money to pay when it's not what you thought you were getting.

I'd return it and ask for return shipping since it's nothing like it was described and advertised. That is way too much money to not get back for something you don't like.

I've never been happy with any of the artificial arrangements.

I called cs and explained the situation and was happy to be offered a nice credit which I accepted .   The arragement is beautiful and the difference is not noticeable by anyone but me .  If it was sold as lifellike roses as most of the  line I would have been fine with it .   I just felt mislead.   The customer service rep was more then nice and understood .   I'm pleased with the outcome and the arragement on our dinning room table.

@Kitty Galore,  I'm glad they resolved it to your satisfaction (as they should have).  The "Peony" line is so pretty onscreen and it must have been deflating to find this particular item not quite as advertized.

I'm with you in finding so many of their things so visually striking.  Still haven't pulled the trigger yet, but so enjoy looking...

I'm about to do something I hate it when other's do it....(I'm gritting my teeth here)...but I also have several arrangements from Peony and love all of them.

In fact I have the stargazer lilly arrangement.  It's sitting in my kitchen.  It's been there for maybe 2 months (at least).

My friend comes to help me 2X's a week.  We were standing in the kitchen and she commented that it's nice that I always have beautiful stargazer's in the kitchen.

I said, "They're not real".  She had to go over and feel them.  She was convinced they were real.

I used to buy them every week at the store.  The looked exactly like the one's in my kitchen.

The first chance I get maybe I'll send her some. 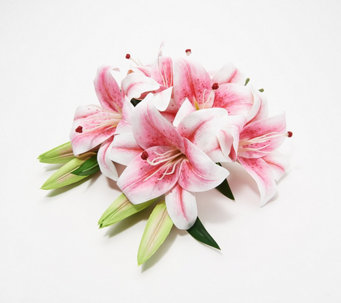 I just stuck them in a really cute vase and I love the look.

I'm not familiar with the one the OP posted about.  However, I have about 4 or 5 other one's and they're beautiful.

I have two cats.  Bill has never seen something he hasn't been able to climb up on.  I can't take a chance of him eating real flowers.

I used to always have real flowers around my house but can't do it anymore.

@Kitty Galore,  I'm glad they resolved it to your satisfaction (as they should have).  The "Peony" line is so pretty onscreen and it must have been deflating to find this particular item not quite as advertized.

I'm with you in finding so many of their things so visually striking.  Still haven't pulled the trigger yet, but so enjoy looking...

@Oznell    Yes I really was surprised that it wasn't what I thought from it being presented .  I am however happy it got resolved and I am satisfied with that.    It's a beautiful line and the other arrangements I have 5 in total , 6 new with this one i am thrilled with,  get many compliments.

If you at some point purchase an item from the line  please post your thoughts I would love to know what you think.