"I'm an old soul in a young person": Boy, 11, goes viral for his amazing CROCHET talent - as people praise his incredible self-taught skills that he learned at age FIVE by watching videos online

An 11-year-old boy who crochets different items and sells them has gone viral for his impeccable, creative skills.

Jonah Larson, from Wisconsin, learned how to crochet - a method of using yarn and a special needle with a hook to create clothing and other items - at the young age of five when he began watching video tutorials on YouTube.

Now the sixth grade student, who shares photos of his work on his Instagram page, crochets for anywhere between two to five hours. 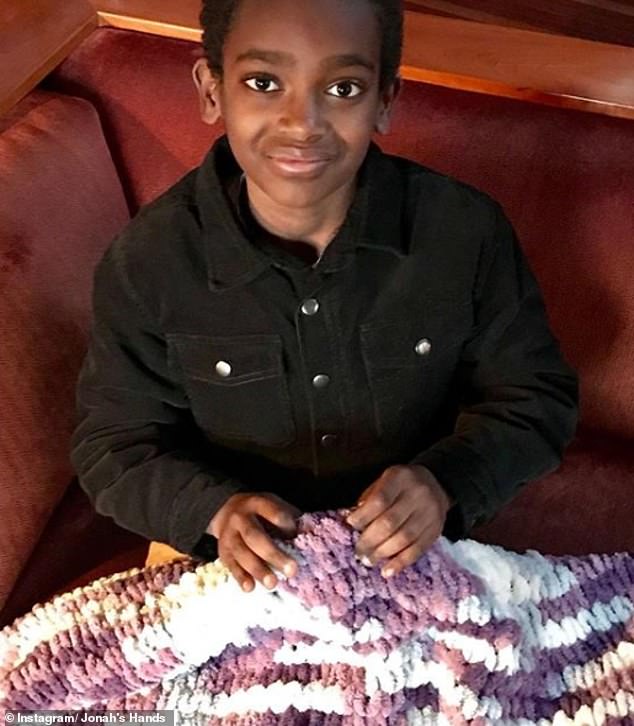 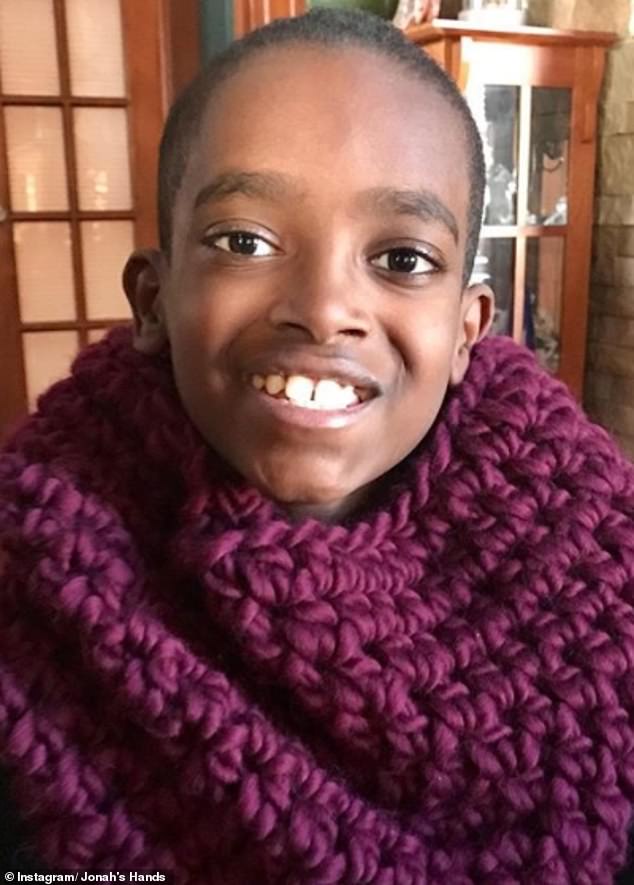 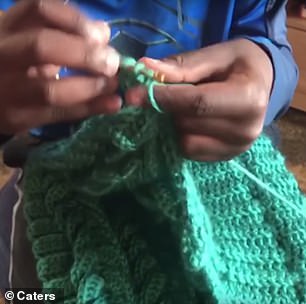 The 11-year-old, who originally lived in Ethiopia before being adopted by his parents Jennifer and husband Christopher at six-months-old, started crocheting when he was just five-years-old.

He learned his skills from watching videos on YouTube, and now spends most of his days practicing the skill as he creates different pieces and sells them to happy customers.

Jonah then shares photographs of some of his creations on his Instagram page, which is run by his mother, Jennifer Larson. 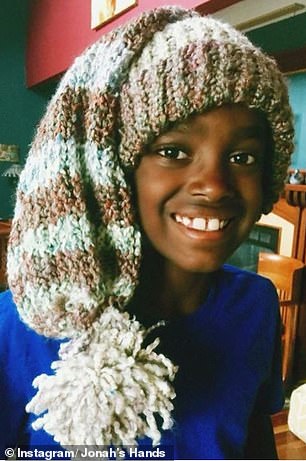 Back in January, a local newspaper - the La Crosse Tribune - published a story about Jonah's crochet skills, and his following jumped up when his page went viral.

Jonah now has a whopping 132,000 followers on the social media platform.

Speaking to the publication, the 11-year-old explained that he began crocheting when he found a hook in a craft supply box. He then followed a video online, and completed a dishcloth within just one hour.

Jonah said: 'It was very relaxing after a hard day at school.'

The 11-year-old has even won awards for his crocheted creations. He entered some of his pieces into a local competition when he was in kindergarten, and ended up winning.

Jonah, who described the win as 'awesome', took home seven ribbons the following year. He now has approximately 70 ribbons in total.

Jonah said he is proud of everything he makes. He told NPR: 'When I see my crochet work when it's done, it blows my mind to know that I, an 11-year-old with a tiny hook and a ball of yarn, made this amazing afghan, scarf, cowl, you name it.'

He also created a YouTube channel where he shares different style videos including clips that show him un-boxing packages of yarn he receives, as well as demonstrating how to make different items by crocheting.

Jonah's mother Jennifer said her son regularly receives deliveries of yarn from people all around the world.

She said: 'In the basement we have 20 totes (full). He gets boxes of yarn from all over - England, Canada. I think they’re worried the art of crocheting is going to end, and they’re just excited a young person will carry it on.' 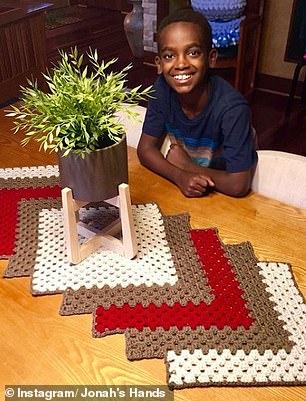 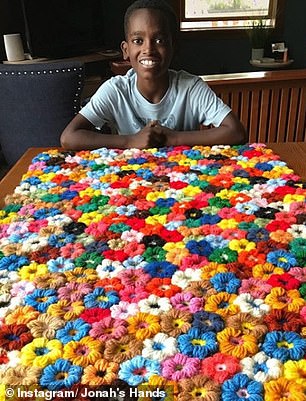 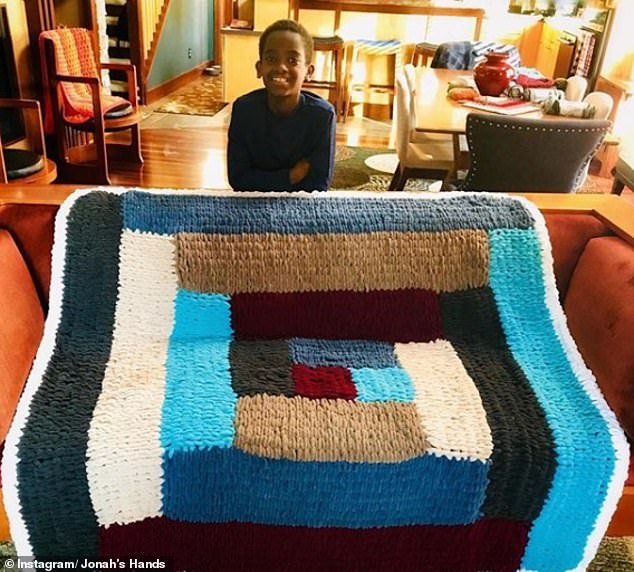 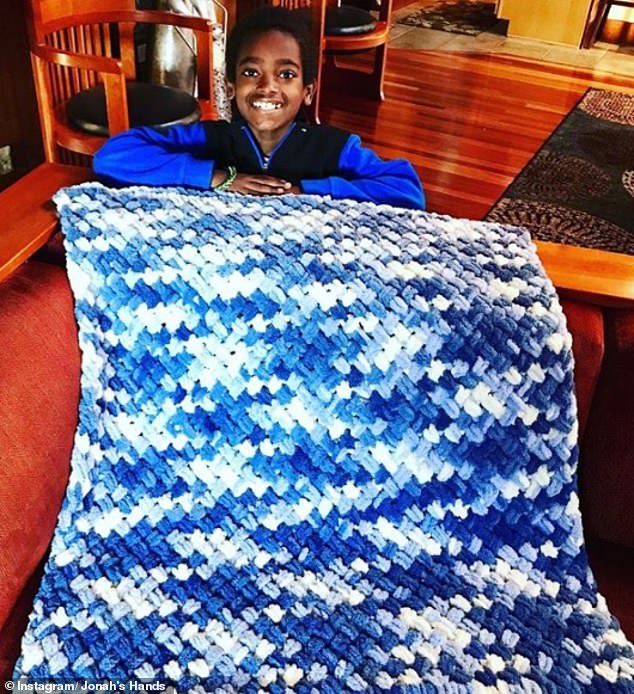 She added that she was initially slightly concerned that her son might be bullied for his choice of hobby, however, she revealed that his peers have been nothing but supportive of Johah.

Some have even asked him for crocheting lessons.

The mother-of-three said neither Jonah's teenage brother or younger sister have proven passionate about crocheting. 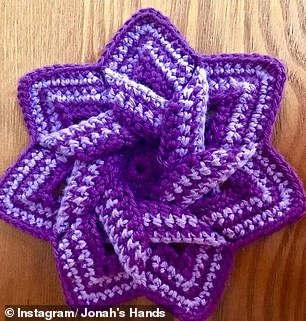 And although crocheting might not be the usual hobby for an 11-year-old, Jennifer said Jonah is more interested in seeing what he can create with yarn, rather than playing video games.

Jonah told the publication that, although he wants to be a surgeon or an orthodontist when he grows up, he will still continue to crochet.

He said: 'I'm going to be an old man crocheting. I’m an old soul in a young person.'

Since his Instagram page went viral earlier this year, Jonah has received many orders.

According to Metro, the 11-year-old has recently received approximately 4,000 orders from different people eager to get their hands on one of his pieces.

So inundated with orders, the 11-year-old reportedly even had to turn down an invitation to appear on the Ellen DeGeneres show.

Despite the overwhelming recognition, Jonah remains humble, and follows his parents' rule that family and school always come first. 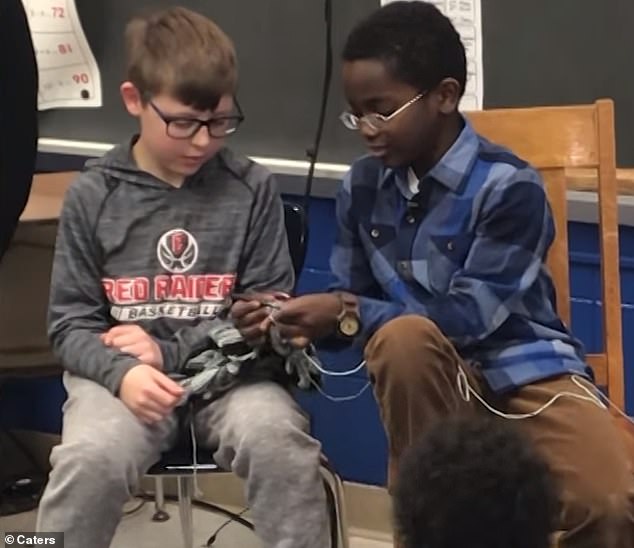 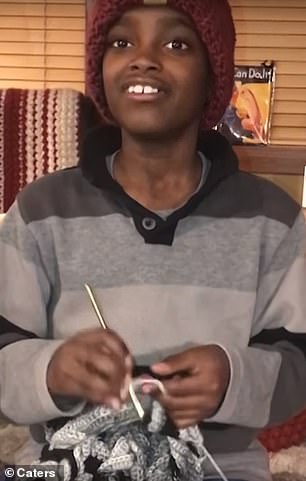 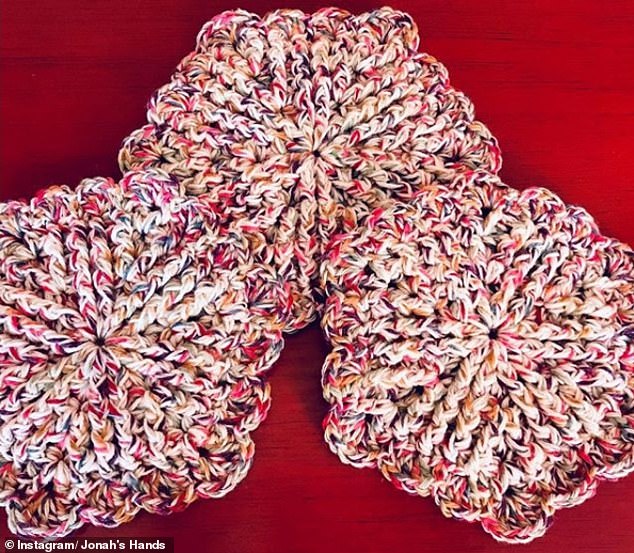 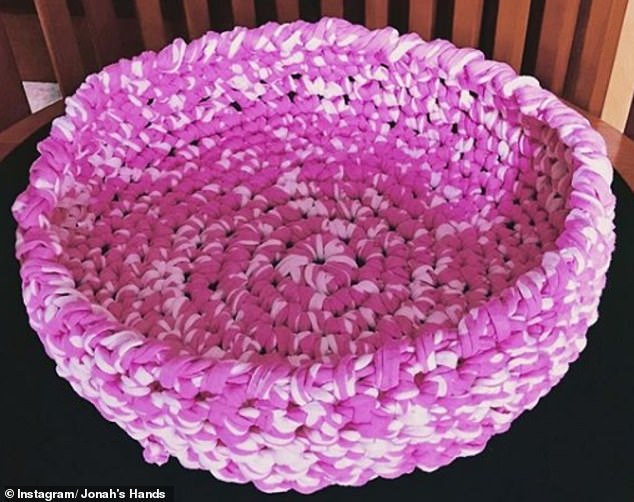 And Jonah isn't all business. He also loves to use his special talents to give back and to help others.

He donated a generous $400 to an organization in Ethiopia, where he hopes to visit one day.

Jonah uploaded a video to his YouTube channel in February, where he told his followers and fans how they can best support him and his 'endeavors'. 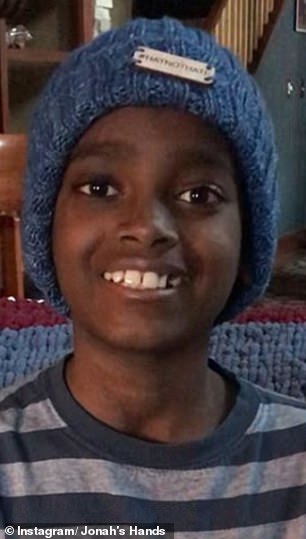 He explained that those wishing to support him can help donate to Roots Ethiopia - a charity that aims to 'improve schools, enable livelihoods, educate children and serve special needs students' in the country - via a GoFundMe page he set up.

Jonah said: 'The orphanage where I was born is now gone, so orphan care is now needed more than ever.

'Additional funds are going [toward] helping me go back to Ethiopia and meet all the people who raised me in my early years, and see how the funds benefit.'

Jonah pays for all of the yarn and different supplies he uses to make his pieces by himself.

Jennifer explained: 'Jonah pays for his supplies, careful to watch for sales and coupons and keeps the proceeds from his sales, saving for "college, retirement and anything I want to buy otherwise".

After being approached by Milwaukee, Wisconsin-based publishers KWiL Publishing, Jonah signed a book deal, and is now in the process of writing a book about his journey with crocheting.

The book, Hello, Crochet Friends! Making Art, Being Mindful, Giving Back: Do What Makes You Happy, is due to be released this summer on Tuesday, July 23.

Jonah said that he doesn't crochet 'for the fame or the TV shows'.

'I do it because it is a very calming activity that helps me relax. It also unites everyone around the world,' he added.

"Smart people learn from everything and everyone, average people from their experiences, stupid people already have all the answers."
Report Inappropriate Content
Message 1 of 11 (671 Views)
Reply
32 Hearts
on the bay
Honored Contributor

Those are gorgeous! Good for him!

"If you walk the footsteps of a stranger, you'll learn things you never knew. Can you sing with all the voices of the mountains? can you paint with all the colors of the wind?"
Report Inappropriate Content
Message 2 of 11 (649 Views)
Reply
9 Hearts
Highlighted
nova
Valued Contributor

Such beautiful work from such a young person.  Good for him!

Just amazing!  My first thought was that I have to share this with my DIL who loves to crochet. But when I went to Jonah’s Instagram page I saw that she is already following him. Thanks so much for sharing this amazingly talented boy with us @feline groovy

Thank you for this story!

I have tried to crochet, but I am all thumbs.  This young man is very talented.  I love his beautiful crocheted pieces.

And he is adorable.  What beautiful kind eyes he has.

@feline groovy  What a wonderful story. Thanks for sharing it!

Talented kid; looks like such a nice boy too!  It's nice to read a story like this.

This kid is amazing!  I tried and tried to learn crochet and knit and I just couldn’t get it. I could look at these pictures all day. I mean those blankets and the place mats the bowl, hats etc. Wow!  Thank you so much for sharing this.