Auto-suggest helps you quickly narrow down your search results by suggesting possible matches as you type.
Showing results for
Search instead for
Do you mean
Reply
Topic Options
Zhills
Esteemed Contributor

Identify this flower for me.

Put down mulch in late Summer and now these are popping up all over the flower bed.

Never seen them in Florida before.  Do you know what they are?  Flowers or weeds? 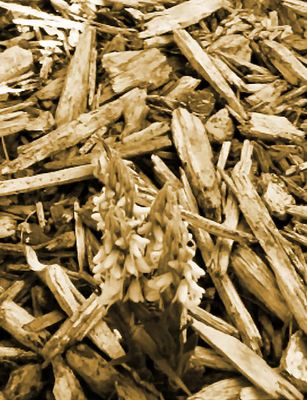 I can't get past the "mulch".  Never seen any like that - appears to be more bark chips.  Plant could be anything growing out of moist wood chips.  Sorry - Hate to insult your mulch.

They are only a couple of inches high.  One is maybe 4?  Long green leaves growing close to the stem and the flowers blooming on a cone.  The "mulch" will understand!!

Could they be white hyacinths, from bulbs?  They usually bloom much later into the spring here in the PNW, but down in Florida I can see the bulbs sprouting immediately, once there was enough moisture, setting roots down into the soil, and blooming about  now.  If they are bulbs, you can wait until they finish blooming and the leaves die back, then dig them up and plant them all together in a good locale for your current landscaping.

The picture isn't the clearest. The sepia-like tones makes it hard to tell for sure, but since it's popping up in mulch all over the place, a fungus would be a good guess. You do say it has green leaves though which makes that less likely. As wood chips decay, fungi tend to take hold and sprout. You can get all kinds of interesting things popping up. It doesn't really look like a fungus, but for it to be widespread and associated with the mulch and not something you planted, a weird fungus could be the answer. But a fungus wouldn't have green leaves. Hmm..... I could really use a better photo to tell you more.

It could be an ornithogalum. I have a few that pop up in my yard every spring. Yours is different from mine, but there's a lot of variation in the ornithogalum. I didn't plant mine, they just came up on their own, so technically they're a weed, but they're a pretty weed, so I don't mind..If the mulch was contaminated with ornithogalum seeds, that could be the answer. We really need a better, full color, detailed photo to give you a better answer.

Your mulch is growing!

Wood Hyacynth?  They have loose flowers like that in stead of the regular hyacynth.

Thanks, Everyone, for your input.  Got some clearer pics.  Are they flowers or just weeds. 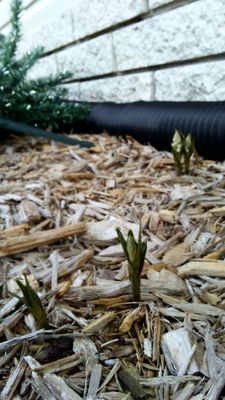