Auto-suggest helps you quickly narrow down your search results by suggesting possible matches as you type.
Showing results for
Search instead for
Do you mean
Reply
Topic Options
DiAnne
Honored Contributor

Nothing from QVC - I didn't watch but I purchased a pair of white slim leg jeans from LLBean, a navy blue sweater from J. Crew and pink suede loafers from Amazon.

I purchased a couple of Lunchtime Specials - both from Isaac M.  I bought the blazer to wear at work with my khaki's  for spring/summer and bought a pair of ankle boots to wear now. 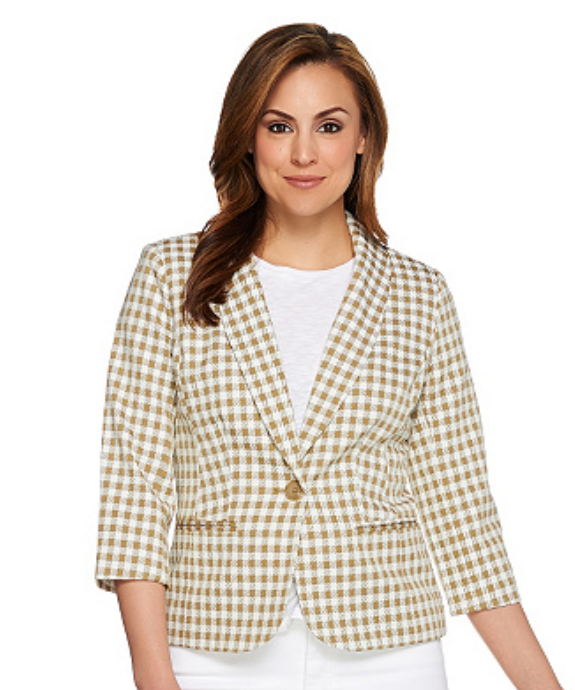 I bought Earth Sandals A349687 and two pairs of print WWC crop pants A350563.  The pants are stretch for me because I never wear print pants but I saw the presentations and I liked them.

I think you'll enjoy it. It was outside of  my box too when I saw it a few years ago on others but I liked it so I tried it.

Somehow, I wasn't even aware it was a Fashion Weekend.

I bought some books on ebay.

I didn't know either, but I do not watch.  However, I never saw any posts about it.

I decided to give the skinnytees a second try. Being five foot two the straps were too long on the traditional tank but the one they were selling today was more like a sleeveless tee, which I really like, so I'm giving it another try. What did you pick up from Fashion day?

Nothing from the Q. From other sources, ballet-style sneakers from Keds in both black and white, taupe colored leather sneakers from Cole Haan (purchased from Nordstrom), and a few things from Talbots (will have to see what fits when it gets here!).

I purchased 2 pair of crop pants HALSTON on clearance and 2 Logo tops on clearance.  And I bought 2 pair leather pumps on Amazon...QVC shoe prices just seem out of sight lately.  I purchased 2 of the same exact shoe that I own 1 of now.  Its my go to pump and cannot be without them.

A288103 Denim & Co.in apple red via LTS I figured they would work with bright blue and something white nicely for the patriotic holidays

@Diva on The Q I saw those presented and thought they were so pretty!

From QVC I bought an IM jean jacket on clearance in Tea Rose A306370.

I went on on a shopping spree this weekend and bought a couple clearance pieces at WHBM, as well as several things at Talbots.

I didn't used to think much about clothing until I started following some of these fashion threads. You ladies are BAD influences!  😳😁

I decided to give the skinnytees a second try. Being five foot two the straps were too long on the traditional tank but the one they were selling today was more like a sleeveless tee, which I really like, so I'm giving it another try. What did you pick up from Fashion day?

I’ve been thinking about skinnytees, & have decided that they don’t work for me.

Firstly, I want more control then they offer, but now I think that the  long, straight, tight look coming out from under a shorter top isn’t current looking.  Something looser & swingier now looks more modern to me.  Also, the color I have, nude, just looks like underwear peeking out below.  Just my idea!