SHOPAHOLICS: ONE DAY AT A TIME (SUNDAY FEB 4)

Good morning, shopping friends We have had an ice and snow storm so bad that even the churches have cancelled services. It is a good day to stay inside.

I've watched the presentation of the TSV and really like it, but I've never tried that line and don't know if I should trust the "click here" garment measurements based upon some saying they sized down. When in doubt, the solution is not to order. There will always be crops offered and some will be at an equivalent of an even less price tag.  Yes, I know there is free shipping but it isn't free to return if the sizing is off. After ordering the crops yesterday, I don't need these so they are definitely a want.

I lost a pound and a half last week for a total of 6 pounds since January 1.  In addition, I  cycled an average of 2 hours a day for each day. I'm cutting that back this week to see how that works. 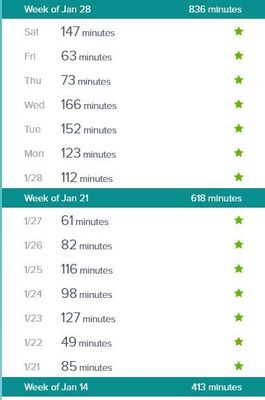 Have a great day. If you shop, shop wisely!

**************** "A black cat crossing your path just means that it is going from one place to another." Proud owner of a black cat and a shopper of QVC since the merger with CVN.
Report Inappropriate Content
Message 1 of 10 (416 Views)
Reply
4 Hearts
Highlighted
LindaLatte
Esteemed Contributor

Good Morning and thanks for getting us started, Jean.  Your weather sounds very bad to me.  Good day to stay home and bundle up.  It is nice here -- sunny and it should reach the 70's after a cool (40's) start.

You have done a great job with your weight and exercise.  Probably a good idea to cut back a bit on exercise.  I know that when I exercise too much, i can end up with feet and/or knee issues.  However, your machine may be better for preventing those problems than my regular walking and gym visits.

I like capri pants rather than crops, so the TSV is not calling to me either.  Also not sure of the sizing.  So, I dodge another shopping bullet on that one. LOL

Nothing exciting going on here today.  I will be going to the gym and visiting DH later.  Today is my DGD's birthday -- can't believe she is 18 now.

Waves to all of our posters and readers.  Have a nice day everyone!

Hello all, my Or Paz earrings shipped so it looks like I will receive them before Valentine's Day.  That's how I justified buying them, lol, from me - to me present.

I just shoveled the snow out front.  I could tell the ground wasn't bitter cold and it was starting to melt underneath so I cleared everything to avoid creating an ice rink out there.

Decades TV is running a Mannix marathon this weekend so the background noise has been pleasant.

I don't wear crops, capris or shorts so the TSV is of no interest to me.

Linda--Enjoy that great weather and also your visit to DH. Sizing issues? Instead of looking at the model and saying "what size are you?" why not add "What is your hip measurement for the size you are wearing?" I know it is difficult to judge by looking at the TV but one said she was wearing a 14 but she looked bigger than me. The garment measurements indicate that a 14 definitely would not work for me.

Bernie--I'm glad you are getting the Or Paz earrings in time for Valentine's Day. I love the way you justify things; you are a person who thinks like I do. Have fun shoveling. I got that shovel you rave about; but the snow lately has not been bad enough to put it to use. When I ordered it, I could have used it instead of "old faithful."

I have no interest in the "Lesser Bowl" as I fondly call the Super Bowl. Hulu and Netflix, here I come!!

**************** "A black cat crossing your path just means that it is going from one place to another." Proud owner of a black cat and a shopper of QVC since the merger with CVN.
Report Inappropriate Content
Message 4 of 10 (329 Views)
Reply
2 Hearts
Highlighted
twinny70
Respected Contributor

Jean, good job with your weight loss & exercising.  I do more inside things this time of the year.

We got 4" of light fluffy snow.  Very manageable & no delays or cancellations.  It is sunny & beautiful.    Hot tub time.

Bird Mama, we don't have any  slick spots yet.  Enjoy your new earrings.

Nothing exciting going on today, but a busy week starting tomorrow.

Twinny--I know how much you enjoy the snow. We started with a coating of ice which was then covered by less than an inch of snow. I guess the crooked roads were skating rinks. It is now raining.

I emailed an inquiry to the company we are considering for a couple of tours in England. They just called me to discuss my questions. Email this morning; phone call this afternoon. Is that service?

QF has a crop pants at a pre-season price at a far lower price than the TSV. I've always had good luck with this line.

**************** "A black cat crossing your path just means that it is going from one place to another." Proud owner of a black cat and a shopper of QVC since the merger with CVN.
Report Inappropriate Content
Message 6 of 10 (287 Views)
Reply
3 Hearts
Highlighted
meallen616
Honored Contributor

meallen---Thanks for the graphic, but I'll be enjoying other things. It just isn't my thing. I do know many look forward to the day.

**************** "A black cat crossing your path just means that it is going from one place to another." Proud owner of a black cat and a shopper of QVC since the merger with CVN.
Report Inappropriate Content
Message 8 of 10 (240 Views)
Reply
2 Hearts
Highlighted
birdmama
Honored Contributor

When husband was alive, I tended to watch more regular season football so by the time the superbowl came around I could speak intelligently about the teams.  That was a long time ago in a land far away

If I remember, I'll tune into the half time shows.  This year Justin Timberlake is performing and yesterday there were rumblings all over facebook and twitter that because the game is being played in MN, there would be a Prince hologram in the show.

As a Prince fan since the age of 16, which means longer than Timberlake has been on the planet

no matter who does them.  None of us will think less of you - I promise.

2.  Prince, when asked about the subject of holograms in 1998, said he

didn't go for that.  If it was meant for him to play with an iconic

musician, then he would have been of the same era as said iconic

After monitoring the situation and hearing there will be no hologram after all - I'm still not watching.  Don't trust JT, the NFL or Prince's family at this time.

In conclusion, it will be an evening with Joe Mannix on the Decades series marathon.

Bernie--You spend the evening with Mannix and I'll spend it with "The Good Doctor" on Hulu.

**************** "A black cat crossing your path just means that it is going from one place to another." Proud owner of a black cat and a shopper of QVC since the merger with CVN.
Report Inappropriate Content
Message 10 of 10 (174 Views)
Reply
1 Heart