Bernie--I like your "rewards" thinking.  I confess to some of the same. I have an Amazon Visa that I use nearly everywhere and pay in full.  I like it better than my other rewards cards. I've cashed in the rewards as a statement credit in the past but lately, I've just been letting it accumulate to use if some special need arises. I'm about to go over the $600 in unused rewards.

Over the years, since being a FatWallet member, I've earned over $2,000 which I've taken in the form of cash when the amount reached around $500. I link through it to every online store, hotel, etc. that gives a percentage. I'm gradually working myself up to another $500.

**************** "A black cat crossing your path just means that it is going from one place to another." Proud owner of a black cat and a shopper of QVC since the merger with CVN.
Report Inappropriate Content
Message 21 of 26 (219 Views)
Reply
2 Hearts
Highlighted
birdmama
Honored Contributor

Honestly, I had an AMEX card for years before I joined their rewards - points thing.  I never tried rebate, ebate whatever bate is out there.  Just joined JCP rewards because let's face it, why not. It's my primary destination for my tall clothing and I'm going to spend money there whether they reward me or not (lol).

I had a Rite Aid card but only go in once every 3 months for my Synthroid.  I never think of going to a pharmacy for other stuff although I do score some neat stuff when I remember to look around.

They just partnered with Amex or somebody and upgraded the card to something called Plenti or something like that.  I know, when you read my posts the thought has to cross your mind - She holds down a job and drives a car lol?

I don't know.  There was so much they wanted to me give up information wise with the Plenti card, I said oh, the hell with it.

Same thing with Chase.  I never set up an online account with them and thought Bernie - you monitor your Amex all the time.  Sign up with Chase.  They asked for my ss# and I stopped the registration.  I don't remember Amex asking me for my SS#.

There are many elements: wind, fire, water
But none quite like the element of surprise
Report Inappropriate Content
Message 22 of 26 (212 Views)
Reply
1 Heart
Highlighted
spix
Respected Contributor 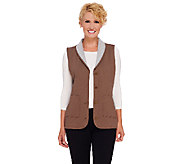 Well don't know about this, but I just want to say, I too like that vest but not the$$

Bernie--I have 3 Chase cards. I do everything on line at the Chase site. The SS # was never requested. They already had the account info on which the cards were based. The worst awards card I have is an AMEX but it has a great credit limit so I use it periodically and pay it off to keep it active. There aren't that many places aroud me that take AMEX now. Even Costco next year will no longer have a contract with AMEX.  I have one of those Rite Aid cards only becasuse I get prescriptios there frequently. I don't pay much attention to it but have gotten reduced prices at times on things I would normally buy.

**************** "A black cat crossing your path just means that it is going from one place to another." Proud owner of a black cat and a shopper of QVC since the merger with CVN.
Report Inappropriate Content
Message 24 of 26 (179 Views)
Reply
2 Hearts
Highlighted
Gennygirl
Trusted Contributor

Bernie....Macy's has that Plenti thing...I have no ifea what it is...they just started with it ,if you understand it let me know!!! lol.

The concept is using one card to earn points at participating retailers and then use them at these retailers. Too much big brother tracking my shopping habits. They do it today, I'm not inclined to make it easy on them, lol.
There are many elements: wind, fire, water
But none quite like the element of surprise
Report Inappropriate Content
Message 26 of 26 (147 Views)
Reply
0 Hearts