Auto-suggest helps you quickly narrow down your search results by suggesting possible matches as you type.
Showing results for
Search instead for
Do you mean
Reply
Topic Options
annabellethecat
Honored Contributor

@corinne @Gokimi  I agree, I would just order my regular size.  I ordered a size 1X.  I'm just regular boobs when I gather them up from everywhere (Ha!).  I can look at food an go up (fat), so I've put on a few pounds.  I guess you could say my middle is my worst fat area.  I've had difficulty in the past where things don't go over my stomach/hips area.

I wanted to be able to zip this up and it does.  It works good for me because it isn't big at other places.  You know how sometimes the arm holes are huge and it looks terrible around the bust area?  I didn't find that.

Here's something everyone must take into account when ordering from QVC.  Here's what I know.  QVC lets manufacturers bid on what they will charge to make their clothes.  That's why you can buy a shirt, love it, decide to go back for another one later and it doesn't fit.  That's because another manufacturer is now making this top.  They are supposed to follow the same measurements, but because we are dealing with different COUNTRIES,  that will vary.

This variation in sizes is especially true with Denim & Co.  Labels like Dell'Olio have a specific buyer who oversees the quality (it's his name on that label).  Poor D&C doesn't have the same.  Maybe similar buyers, but not like Louis.

I know this is way more than you expected for your question.  I just think I should tell you what I've found and I'll bet others here will tell you they've had similar problems.

Think about this.  When Louis is on and he sells out of something either you can't get it again or it takes a long time to get it. Whereas with Denim & Co there are thousands of it and it's available soon (as with this vest).

In closing and to back up my point.  When was the last time Louis Dell'Olio had a TSV?  His buyer won't just let anyone manufacture zillions of something because it's more difficult to oversee the quality control (again, his name on the label) and the cost would be way more than QVC is willing to accept.  It's a lot cheaper to produce a D&C vest than it is to do a Louis vest.  It's all about the bottom line (money).

Did anyone receive the silver color one yet? Is it a nice rich silver tone or does it look like aluminum foil? TIA!

@lolakimono Thank you for this tip.  Great deal!

Very unattractive. Makes Jackie look so heavy! I do not like that large collar. Just not a nice vest.

I got the Landsend version @$19 in silver. (I got it last year at the same price they are offering it this year.) free shipping too. It's cute and I wear it over a sparkly tee shirt with jeans generally. Actually is cut to give you a bit of a shape, IMHO nicer and less expensive than the tsv
Report Inappropriate Content
Message 27 of 42 (360 Views)
Reply
1 Heart
apple1964
Esteemed Contributor

That is a great deal I am going to check it out for my daughter I rather get the down then the polyester much warmer. Thank you lolakimono have a nice day!

@Java wrote:
@I got the Landsend version @$19 in silver. (I got it last year at the same price they are offering it this year.) free shipping too. It's cute and I wear it over a sparkly tee shirt with jeans generally. Actually is cut to give you a bit of a shape, IMHO nicer and less expensive than the tsv

I got the $19 deal Lola recommended but it didn't come with free shipping. So at the end of the day it is only about $6 cheaper than the TSV.  I trust Maggie and others that the TSV is a good purchase but I opted for down and the more simple styling. 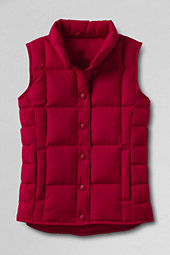 Very unattractive. Makes Jackie look so heavy! I do not like that large collar. Just not a nice vest.

I agree.  I'm not a big fan of vests anyway.  Lol, my arms would get cold.  My mother likes them though.  I bought a really nice one on Macy's for her for Christmas.   It was $80 and I got it for $24.  I have to laugh as I am watching Carolyn.  One of her standard descriptions for clothing is that it's slimming.  Sorry, but it doesn't look that way to me.