Auto-suggest helps you quickly narrow down your search results by suggesting possible matches as you type.
Showing results for
Search instead for
Do you mean
Reply
Topic Options
Lipstickdiva
Honored Contributor

To me  it definitely depends on the venue.  Our reunions are generally 2 nights with the first night (Friday) being a very casual get together at a nicer local bar. But it's casual attire.

The second night is more formal with a nice catered dinner.  Generally it's in a reserved part of a restaurant overlooking the water or it's in a hall.  Women are in dresses or dressy pants and tops and guys wear suits.

I went to my 45th last August.  I was surprised at how the women looked, not dressed up at all, including the men.  I wore a red dress that Lola picked out for me.  I felt overdressed but felt good about the way I looked.  Here's me in the dress I chose. 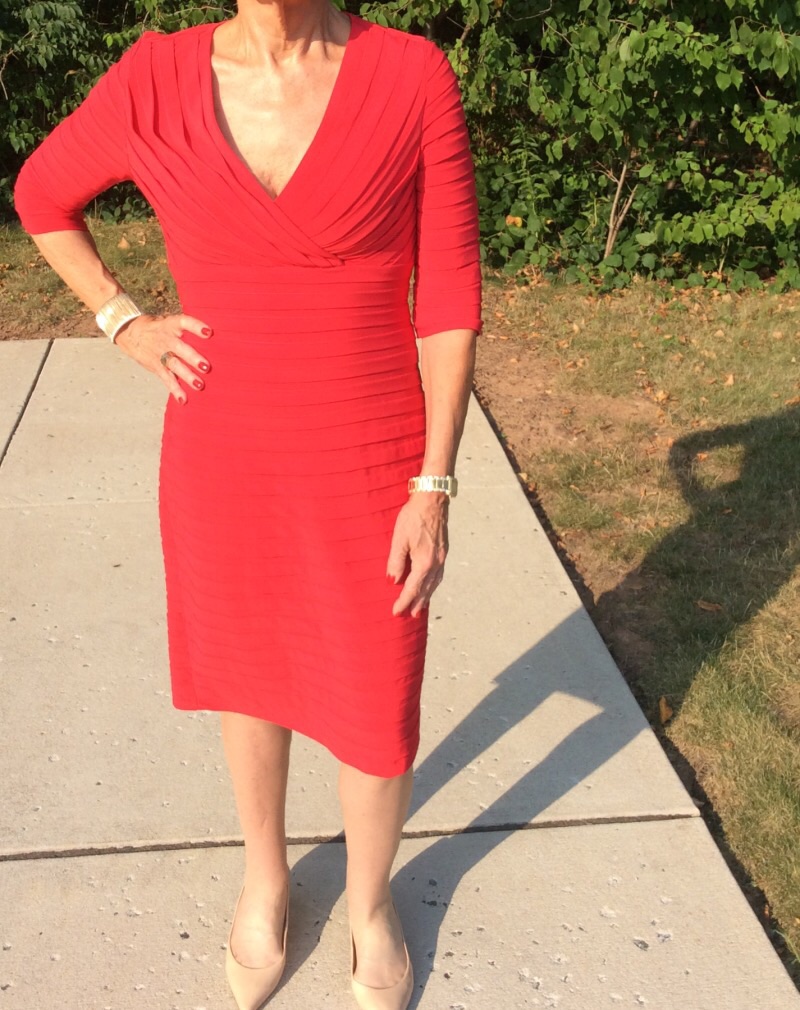 I attended mine recently of which there were several event:

Casual Thursday night get-to-know-one-another-again and preparation for the following day.

Friday, the following day included a day of activities from breakfast, general assembly to homecoming pep rally, lunch with the teachers and the afternoon homecoming parade, ending with a late afternoon/early evening cook-out and gab session.  This day went from casual to dress for lunch, to casual for the cook-out and parade.

So, from Thursday through Saturday, there were events for all and dress for all.  For the final event, the dinner, most everyone was dressed nicely, either very nice dress pants, cocktail dresses; suits or nice pants and sport coats.

I would wear a dress but both of your outfit possibilities are appropriate IMO.

Hi everyone and thanks for all of your comments and suggestions! We're back from our weekend, so I thought I'd tell you about the fashion there! I ended up wearing a short back dress (DH wanted me to), black tights and heels. I wore a favorite jacket of mine - old Coldwater Creek in their travel knit with a black background, red, mustard gold, and sage leaves and a gold thread running through it. Most of the women there were wearing skirts or dresses. Some wore dressy pants, and a few wore cocktail attire or something more formal. I felt very comfortable with how I was dressed.

Here's the embarrassing part: DH went to a small high school. The only time I met any of his classmates was when he attended the reunion 5 years ago - the first one he could attend. They had pictures from that reunion, and guess who was in one of them wearing the SAME jacket??! I told you it was my favorite. I even tried on 3 others before we left and let DH see them. One of his old friends who was there - and whom I'd never met before - teased me about it! At least my black dress was different! Oh well! LOL!

BTW Himi lover - your dress is absolutely gorgeous! And you looked terrific in it! I would look good in that color too. And it would have been perfect for this one. I'll think about that the next time I can drag DH to one of mine!

BTW Himi lover - your dress is absolutely gorgeous! And you looked terrific in it! I would look good in that color too. And it would have been perfect for this one. I'll think about that the next time I can drag DH to one of mine!

Ahh...you're sweet.  Post a pic of yourself.  We want to see your dress!