Auto-suggest helps you quickly narrow down your search results by suggesting possible matches as you type.
Showing results for
Search instead for
Do you mean
Reply
Topic Options
shesallthat
Super Contributor 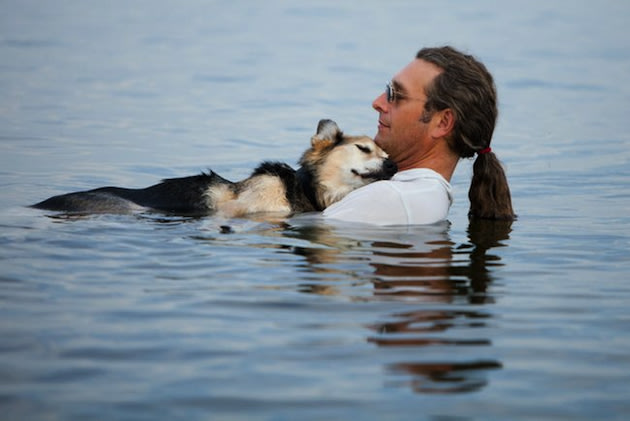 A photograph of a 19-year-old arthritic dog taking a relaxing dip in Lake Superior has captured the hearts of millions online. The image was posted to Facebook by photographer Hannah Stonehouse Hudson, who wrote:

"This 19-year-old [Schoep is] being cradled in his father's arms last night in Lake Superior. Schoep falls asleep every night when he is carried into the lake. The buoyancy of the water soothes his arthritic bones. Lake Superior is very warm right now, so the temp of the water is perfect. I was so happy I got to capture this moment for John. By the way, John rescued Schoep as an 8 month old puppy, and he's been by his side through many adventures

The photo, first posted last week, has been viewed more than 2 million times and has received more than 200,000 "likes" from Facebook users.

In the picture, the dog appears to be asleep while being cradled in his owner's arms as the two wade in the lake.

"My specialty is documenting relationships, whether it's a wedding or a man and his dog," Hudson told the Pioneer Press." John lives his life in a kind way. He rescued this dog as a puppy, they have gone everywhere together ever since. Schoep has arthritis now, and John finds that the water is therapeutic. He is the kind of person who wants his animals to be comfortable. I wanted to capture their relationship. I told John, 'I really need to get photos of you and your dog.'"