Auto-suggest helps you quickly narrow down your search results by suggesting possible matches as you type.
Showing results for
Search instead for
Do you mean
Reply
Topic Options
ms traditional
Respected Contributor

it seems that the WH has a room/color scheme and theme for just about everyone:  red, green, blue, silver, traditional red and green.  i think the State Dining Room looks elegant and love the Sweets Room for the children.  enjoy the season!

@Sandyx2 A very interesting and pretty approach to the China Room. At least as far as I'm aware, though I could be wrong, I don't recall it typically featuring a table, as though set for dinner, in previous years. It's nice to see what they've cooked up this year and it appears in some instances, the approaches to some of the rooms represent fresh ideas.

An excellent representation of this First Family's Christmas celebration.  Hoping to see how Mar-a-Lago has been adorned for the holidays.

@Sandyx2  This is a better view.  It looks like a wintry forest/nature theme to me, and I like it.  The other view is a dark nighttime pic and doesn't do justice to the intended theme.

Unless I miss my guess, this is one of the 'colonnade' hallways, which are essentially glorified service hallway connecting the east and west wings to the main house... Personally, I think this year's interpretation, particularly with the uplighting, is artistic and lovely. That said, I've seen it done in styles that are more traditionally 'pretty' and it's also been done in styles that are far less attractive... As always, it's a matter of personal taste.


In my pantry with my cupcakes...
Report Inappropriate Content
Message 64 of 170 (670 Views)
Reply
4 Hearts

This post has been removed by QVC off topic, political

The small trees positioned in the middle of the Green Room and the Red Room is a bit of a departure, I think. I like the look.

As it sits right now, it looks unfinished. The White House itself looks beautiful-

As it sits right now, it looks unfinished. The White House itself looks beautiful-

I think it's pretty but agree, the gingerbread house is a little on the plain side. That said, and it's just a personal opinion, some of those created in the past seemed to take things a bit far, bordering on kitsch.

Wow the decorations are beautiful.  Really elegant, but homey.  I love the hall with the white trees. And the room wit all the trees , homage to the nutcracker suite was breathtaking.  Kudos to who ever designed it 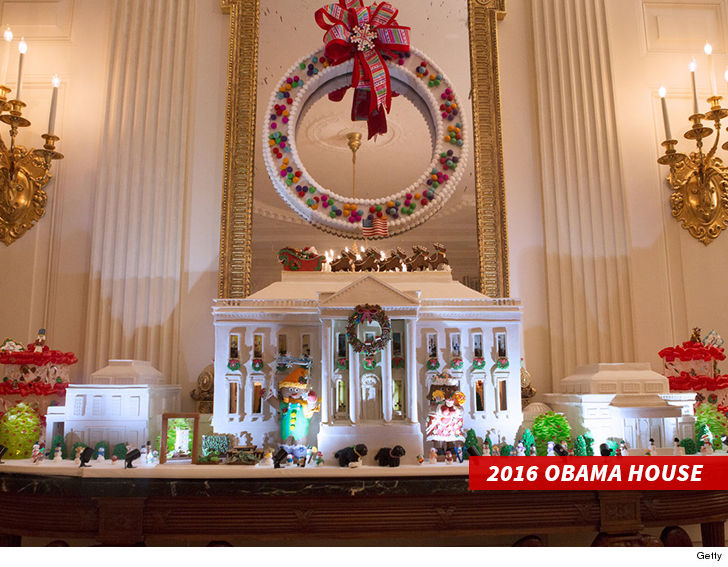