Auto-suggest helps you quickly narrow down your search results by suggesting possible matches as you type.
Showing results for
Search instead for
Do you mean
Reply
Topic Options
shoptilyadropagain
Esteemed Contributor

I don't remember the year (mid to late 70's model) but it was a Pontiac Sunbird.  It was a  Yellowish Beige color with bold coordinating stripes that ran the length of the car at the bottom.  I've googled everything and can't find the Sunbird with the stripes.  I know it wasn't a detail job on the car because there were others in different colors with those same stripes.

Knowledge is knowing that a tomato is a fruit, but Wisdom is knowing not to put it in a fruit salad.
- Author Unknown
Report Inappropriate Content
Message 31 of 98 (280 Views)
Reply
2 Hearts
ItsME
Respected Contributor

@sfnative   We kept that car a long time!  And, i have some crazy stories about it.  Several years in, my father was touching up some spots on HIS car that needed a little attention.  My brother and a friend took it upon themselves to sand down several spots on MY car that they said were rusty, and then they primed them with light gray paint.  They left my midnight blue car looking like it had gray measles!  And I drove it like that until I sold it.  We were young then!

As for My Cousin Vinnie, it's been on my re-watch list.  I just looked it up.... 1964 Buick Skylark Convertible!  You have a great memory!!!

And, I'll never forget the Buick Skylark, because if I'm remembering correctly, that and its Pontiac sister were the subject of much comedy in "My Cousin Vinnie."  Such a funny movie!

I got my hardship just after I turned 15 in my Freshman year 1977.  First car for the first six months was a white 1966 Olds 88 with the ignition in the dash not on the steering.  Lots of duck tape and even a towel I sat on to cushion the duct tape.  Later that summer Mom updated me to a car a local Dr. was selling 1971 Olds 98.  Loved that car. 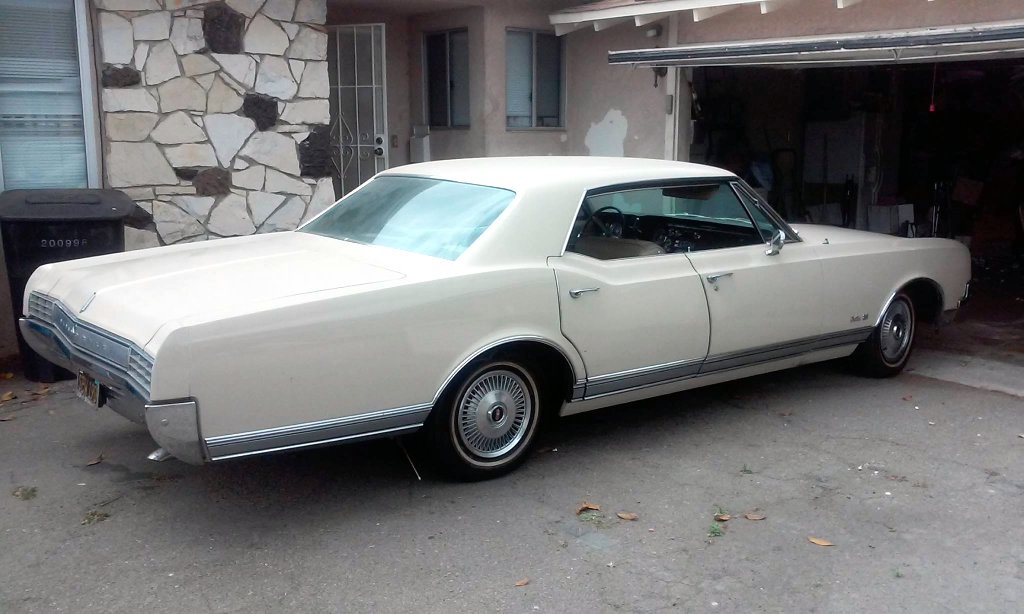 Looks like a lot of towels were sat on from the photos I found on the web for a 1966 Olds.

@kitcat51  Oh my goodness - Loved corvairs. In the mid 60s a next door neighbor of my family had a burgundy corvair. I drooled when I heard one of the sons start it up to go out.

When I was in high school my brother went to Viet Nam, he said I could occasionally drive his old beat up corvair. It was really beat up - the doors were welded closed so I had to climb in the windows (back in those days we wore skirts to school) It was more primer than paint and he had fabric tucked into the front seat because the upholstery was pretty much gone. On my class day my friends & I decorated that car all up and I drove it to school. They had a luncheon for the honor students at a downtown hotel and took us in busses. When we got back we saw that our rival school had come and set a bunch of cars on fire - my brother's was among them. No real loss there. I think my folks were glad it was gone.

My first car was a mustang 2 Mach one.It was a smallish silver car with a hatchback and was sporty looking.I don’t have a picture but I adored that car.I used to take it out and then park on a roadside to stand by it so that cars and people passing would know it was mine and that I was the driver.

I'm a huge fan of beautiful, old classic cars, so I'm really envious of you folks.  Some seriously beautiful cars being mentioned here.

My first car wasn't nearly as cool as most of you here, but I sure loved it.  I had a 1986 Oldsmobile Cutlass Calais, two-door, beautiful blue.  Sadly it was totaled about a month and a half of driving it.  I was hit head on by a kid going the wrong way in a one-way lane.  I was fine, but I cried for that car.

I will say this- I was born in 1977, way too late to have had the chance to experience all the coolness of the cars before me.  Cars today can't even compete with cars from the 50's and 60's, in my humble opinion.

I wasn't quite 14 and I think my older sis took advantage of me making more money than she was at her job. I ended up paying for half of a 1947 4 door Chevy Sedan. Couldn't drive except learning on a HUGE parking lot, but that is how I did learn. Our mom's name was on the title so that was pretty much it.

My 1st Real First car was a 1950 Mercury 2-door Coupe. My cousin traded it in for a new Ford and I bought it from that dealership. Loved that car and tricked it all up with fender skirts/dual exhaust with sweet sounding Glass Pak Mufflers/lowering blocks and had the emblems on the hood and trunk lid shaved, with an electric opener for the trunk lid. Also added the most precious hub caps in the '50's, which were Olds Star Fire hub caps, which thieves liked to steal.

That is the car I used to start my drag racing(kinda career) for close to 20 years. Raced it in several Midwest States and it was very fast for its time in the Stock Drag Racing Class in fell into by(horsepower to weight ratio). Won many trophies with it for years.

Might have some black and white pix and I know I HAD 1 with me kneeling beside it in front of our house. I was wearing my Trade Mark Car named Mr. Clean Hat and a "stoggie" in my mouth. That was who I was for almost 2 decades. Known as Mr Clean, many knew my car around the Midwest, but not my real name. Even some friends called me by the name on that car.

Gotta start getting ready to head out for my 2 hour ice skating session which is a 20 mile drive 3 times a week. Will see if I can find a pix of that car and put it up with this post. I paid for all of my cars, no gifts for old JOhn here!

@sfnativeyou looked adorable sitting on that vw like you were at the top of your game and knew it.You lived in a really nice area back then too.

I got my hardship just after I turned 15 in my Freshman year 1977.  First car for the first six months was a white 1966 Olds 88 with the ignition in the dash not on the steering.  Lots of duck tape and even a towel I sat on to cushion the duct tape.  Later that summer Mom updated me to a car a local Dr. was selling 1971 Olds 98.  Loved that car.

Looks like a lot of towels were sat on from the photos I found on the web for a 1966 Olds.

@beckyb1012  .... I had an electrical short in the steering column of the Skylark one day.  It melted some plastic, which fell onto the seat and set it on fire.  The car was so old that we couldn't find a new seat to buy, so we padded the springs with a couple layers of foam and covered that with a slip cover.  Drove it like that for a few years!

Times were different then!