What is WRONG With People?

A disgusting video of a woman eating groceries, spitting back into the packages and resealing them, has emerged online.

The revolting nine-minute clip follows the woman walking through a Kroger's store in Nashville, Tennessee, as she tampers with multiple products, before replacing them on the shelves.

She has no shopping cart or basket with her and appears to have no intention of buying the products. She is clearly aware of the man filming her, who finally challenges her at the end of the clip — even though he is very obviously part of the "joke".

The stomach-churning footage starts with the woman opening and sampling a bag of chips, before she grimaces and spits the chewed food back into the bag. She then takes a portable hair straightener from her Louis Vuitton handbag and reseals the bag of chips, before replacing it on the shelf.

A second bag of chips is more to her liking; she just samples these before once again heat sealing the pack and replacing it — looking straight into the supposedly-clandestine camera several times — before helping herself to a handful of candy, and closing and replacing that box too.

A third bag of chips meets the same fate as the first however, but this time she opens a pack of toilet roll and licks her tongue clean on it, before shoving that back into its packaging, too.

Her repulsive behavior continues, as she opens water bottles and soda cans, takes swigs, and puts them back on the shelves.

At one stage, she even wipes her fingers clean with a packet of baby wipes, shoves the used wipe back into the packet, closes it and walks away.

After nine minutes of leaving the tainted products in her wake, where any customer could have obliviously bought them, the cameraman finally "confronts" her in a farcical conclusion.

"I'm not stealing," she tells him. "I plan on buying those things. Mind your own business."

"I remember where I put it. It's none of your business, why don't you mind your own business?" she says — before "fleeing the scene."

A spokesperson for Kroger Nashville Division told TooFab that the tainted products were all bought by the individuals in the video.

"The safety of our customers and associates is our top priority," the spokesperson said. "As soon as we received notification of the video circulating that involved one of our stores in the Nashville division, we began our own internal investigation."

"Through the quick action of our team, we were able to verify that the items used for the video were not left behind on the shelf and were purchased by the individuals involved.   This video is disturbing even if intended as a prank.  It is important to remember that tampering with consumer packaging is a criminal offense."

Video Shows Woman Spitting Chips Back Into Bag and Resealing it in Grocery Store (toofab.com)

You never know how strong you are until being strong is the only choice you have.
Report Inappropriate Content
Message 1 of 26 (3,050 Views)
Reply
0 Hearts
Goodie2shoes
Trusted Contributor

I don't even want to look at the video but I hope they were both arrested and charged !

It is our culture now.  All these wannabe Tic Tok stars.  I sound so old but honestly, social media is going to be the death of civilization.

So they faked the whole thing for views and were in on it together. And they bought all the junk they befouled after taking the video.

How pathetic. Stay the heck out of my Kroger you two.

You can go viral for doing something horrible more easily than for doing something good or interesting. We reward this behavior with our attention and our easily provoked outrage. There's a whole outrage industry, and when we give it our clicks and words, like I'm admittedly doing right now, we are make it more profitable and increase its reach into our daily lives.

There was a video either this past summer or sometime last year on tik tock where a woman went into a grocery store and took off the top of an ice cream package and licked it and then put it back on the shelf (I believe she was prosecuted for tampering with the package).

People seem so unhappy and filled with anger and hatred.

This handing out money and people not working along with social media is ruining and destroying our nation.

Our education system is in shambles.

I'm pretty sure that I saw a video of a woman at Walmart putting on her makeup by opening shadows, liners, blushes and lipsticks, etc. then putting  them back.  She was caught by a security guard and the police called. Don't remember if anything was done to her but probably nothing.

This behavior is not new. Years ago, I saw a very tall large man with a small boy who was sitting in his cart, opening tomato sauce jars and sticking his finger in and tasting.  He then put the lid back on and placed them back on the shelf.

I just stood there and watched in disbelief.  His son anounced to his father that " that lady is giving you dirty looks, Dad"

After that the man followed me through out the store giving me menacing looks.  I'm don't  scare easy, but something about this man was off.

When I went to check out I was going to tell the cashier, but the man stayed close to me and stared.  i hurried up and paid and got out there, packed my groceries in my car and left.

I don't know how this man paid for his groceries and got out of the store so fast, but there he was behind me as I exited the parking lot.  He followed me really close as I got on the highway.  I was  afraid he would ram into me.

He got off the same exit that I did. I didn't want him to follow me home, so I drove to the police station parking lot.

He left thankfully, and I drove home.  I was really scared.

I have seen some crazy things in stores since then, but I just ignore it.

Most stores have cameras and can watch their customers.  I let them handle it.

No how, no way would I even look their way if I see something happening.

I always make sure jars, boxes and containers are not tampered with before I buy.

A few years ago, two young guys were bowling with plastic gallon milk containers in Wegman's.  The milk was everywhere and ruined a lot of products.

They were arrested, but I would have  made them clean up the mess before they were hauled off to jail.

I found a picture of the Wegman's incident. It's called gallon smashing. 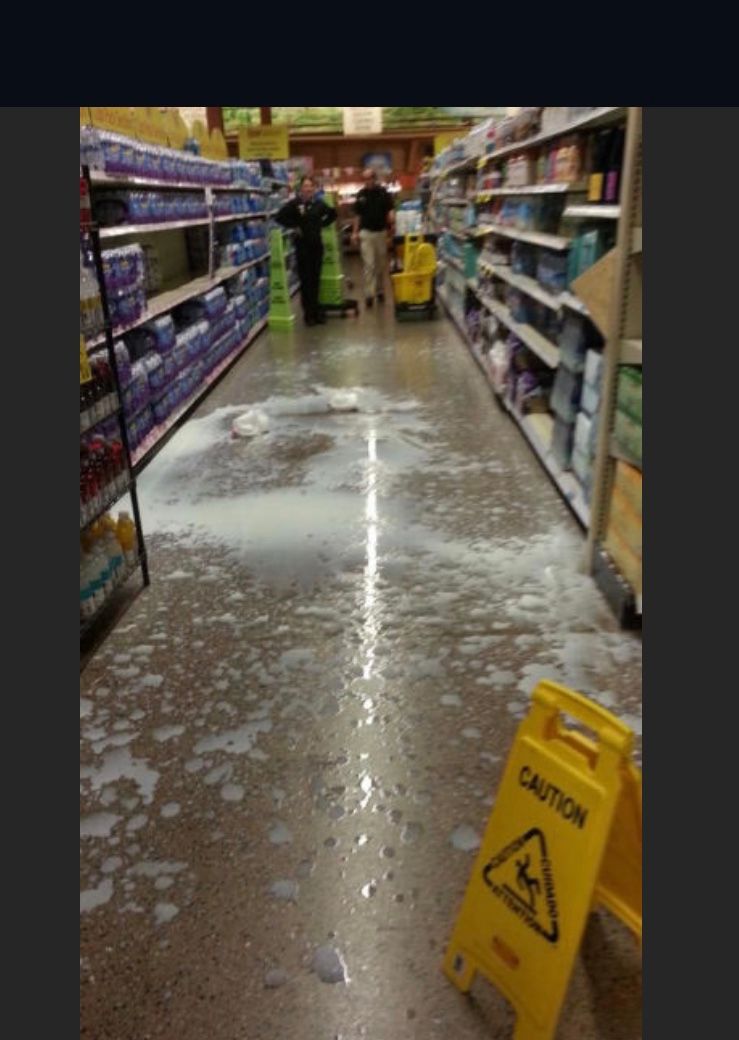 Truly disgusting; I have to wonder what sort of twisted and disturbed person would do this for attention? They should be locked up. It also makes me wonder why no other customers ofr any staff at Kroger didn't see any of this happening and either report it or confront the pair. A lot of sickos out there. I am going to Kroger this afternoon. I sure won't be buying any chips.