Auto-suggest helps you quickly narrow down your search results by suggesting possible matches as you type.
Showing results for
Search instead for
Do you mean
Reply
Topic Options
Hoovermom
Respected Contributor

The University of Alabama released its first batch of Coronavirus (COVID-19) testing results among the student population Monday.

Out of 25,948 students who completed COVID-19 tests as part of the requirement to attend school, less than 1% tested positive as of results received August 16.

All students must submit confirmation of a negative test before attending classes....WVTM13

The death rates are going down.  I think many people are developing immunity or the virus has lost it's punch.  I still think it will take until 2022 before it weakens so much.....It will eventually be taken over by a vaccine.

Since these students come from all over the US, it is encouraging to see the infection rate so low.   Now to have the horrible death rates diminish......

Since these students come from all over the US, it is encouraging to see the infection rate so low.   Now to have the horrible death rates diminish......

If this all makes you happy, I'm glad for you.

My nephew is returning to University of Dayton next week.  They are required to have a test within 5 days of arriving on campus.  They are staggering groups arriving over the next few weeks.  The schools have put into place protocols to contain any outbreaks.

Someday, when scientists discover the center of the Universe....some people will be disappointed it is not them.
Report Inappropriate Content
Message 7 of 131 (2,415 Views)
Reply
6 Hearts
gidgetgh
Honored Contributor

Less than one week in, University of NC at Chapel Hill is cancelling in person classes and sending everyone home.

Satisfied by Covid infections continuing? Of course not. There is nothing to be satisfied about this disease dragging on and on like this. Again, I'm glad you are so happy and satisfied by what is going on. It is not necessary for me to share in your positive assessment for you to be entitled to it.

Edited to add: I just looked up that school. That's the school that was having Covid parties in July. So they really don't care there. I don't think there will be much rule following at all. God protect the staff, frontline workers, and professors who will be exposed to these people. Also, having pictures of yourself partying during this time in your social media is not a good idea for future employment prospects in conservative companies.

"Scenes of crowded entertainment districts and bars on the first weekend many university students returned to campus are raising new questions about safety during the coronavirus pandemic and whether college football can be played this year. In Tuscaloosa, where bars are required to close at 11 p.m. this fall to help stem the spread of the virus, Uber driver Ray Allen told a columnist for The Tuscaloosa News the crowds just move to houses once the nightclubs close. Most students "could care less" about wearing masks, Allen said. 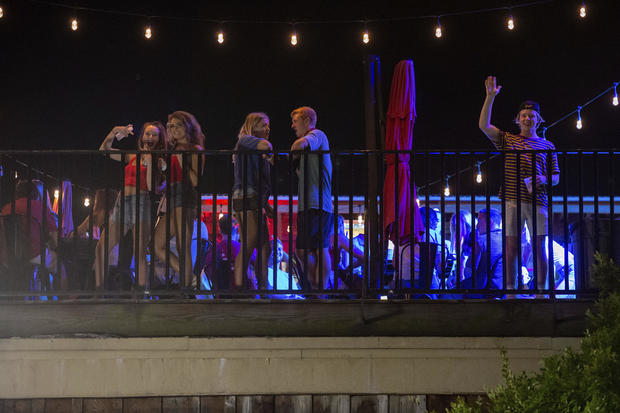 Throngs have gathered in an area near campus called The Strip, and University of Alabama athletic director Greg Byrne tweeted a photo that showed dozens of people, many not wearing face masks or staying away from others, waiting to get in a popular bar.

"Who wants college sports this fall?? Obviously not these people!! We've got to do better than this for each other and our campus community. Please wear your masks!" Byrne said in a tweet Sunday.

In response to Byrne's post, Mayor Walt Maddox tweeted: "Why? We are desperately trying to protect @tuscaloosacity – We are trying to have college football season."

Maddox wrote that police and firefighters now have to come in early and are "actively enforcing" pandemic regulations. "It's a ****** shame that our officers who are stretched thin across the City and who are working to exhaustion can't have a few hours of down time," Maddox said on Twitter.

Maddox said wearing a mask and practicing social distancing is not much to ask for to protect yourself and others, CBS affiliate WIAT reported.

Tuscaloosa police officers issued 12 citations for mask violations and arrested four people, but the problem wasn't just at the University of Alabama: Photos on social media also showed large crowds and relatively few masks around Auburn University over the weekend.

Public health officials worry that crowds on college campuses, combined with the resumption of classes in elementary through high school grades, will increase the spread of the new coronavirus which causes COVID-19.

While some campuses are teaching classes primarily online and some collegiate athletic leagues have canceled fall sports, the Southeastern Conference - which includes Alabama and Auburn - is moving ahead with plans to play games beginning Sept. 26. The league planned to announce its revised game schedule on Monday.

"Universities have enacted rules meant to enforce mask wearing and social distancing on campus, and Alabama has a statewide rule requiring masks in public places. But the rules are being ignored.

More than 104,000 cases of COVID-19 have been confirmed in Alabama and at least 1,830 have died of the illness, which usually results in only mild to moderate symptoms but is particularly dangerous for the elderly and people with other health problems.

Now exposed or infected students are being moved into isolation.

One student with COVID-like symptoms who asked to remain anonymous told Begnaud that she has been doing her best to practice social distancing.

"I've worn a mask pretty much 24/7, I really have no idea where I could have gotten it," she said."It does feel like the choices of a small few have really impacted the overall student body."