Auto-suggest helps you quickly narrow down your search results by suggesting possible matches as you type.
Showing results for
Search instead for
Do you mean
Reply
Topic Options
LuLuBelle2
Valued Contributor

Hats off to this cool as a cucumber pilot for safely landing the Southwest plane in the face of yesterday's disasterous flight. Kudos too to the passengers who tried to save the poor woman who died. They bravely took off their own oxygen masks to administer CPR with no regard for their own safety. These folks are true heroes - blessings and thanks to all of them for their courage and grace under pressure.
Report Inappropriate Content
Message 1 of 17 (1,205 Views)
Reply
46 Hearts
millieshops
Honored Contributor

@LuLuBelle2Kudos to her for sure.  As I listened to the evening news story about her I couldn't help but think of Sully landing his plane on the Hudson.  Amazing pilots, both.

@millieshops, and the one thing Tammie and Sully have in common is military training. Tammie being a former Navy pilot and Sully an Airforce piilot. It speaks volumes.
Report Inappropriate Content
Message 3 of 17 (1,080 Views)
Reply
19 Hearts
sxmgirl
Esteemed Contributor

@LuLuBelle2, the pilot was amazing.  Interviews on our local news indicated that being able to land the plane like she did was first-rate.  Many of the passengers pitched in to help, and the retired school nurse stepped in and gave the woman who did not make it 20 minutes of cpr, until they landed the plane.  Truly an amazing group of people who stepped up in a frightening situation.

The next time that I hear salt and ice together, it better be in a margarita!
Report Inappropriate Content
Message 4 of 17 (1,079 Views)
Reply
14 Hearts
CAcableGirl
Respected Contributor

@LuLuBelle2  Yesterday I heard the recording of the pilot telling the tower about the issues and the engine problems.

What an amazing women under pressure.  If it was me, I probably would have been screaming into the microphone, but her voice and calmness in explaining the problems to the tower was unbelievable.

Talk about remaining calm under pressure - she deserves a medal!

She was a Navy pilot.  She was trained for EVERY kind of emergency.  She landed planes on aircraft carriers.  I believe she flew combat missions.  She's been "real-world" rock-harden.

She's the kind of pilot that EVERY commercial airline ought to be going after hat-in-hand.  There are very few of them.  Southwest is lucky to have her on their roster.

[I pulled the following from a Washington Post article.  What a phenomenal person Tammie Jo Shults is.  The biographical info appears in the later paragraphs.]

The wing on the side of the plane where the explosion occurred suffered damage that left it “banged up pretty good,” NTSB Chairman Robert Sumwalt said. The cabin window blew out with such force that none of the materials were recovered inside the plane, baffling investigators, he said.

“We didn’t see any shards of glass [that blew in] — I say glass, but it’s acrylic,” Sumwalt said. “We found no evidence at all of any broken acrylic inside.”

In the midst of the chaos, Shults deftly guided the plane onto the runway, touching down at 190 mph, saving the lives of 148 people aboard and averting a far worse catastrophe.

“She has nerves of steel,” passenger Alfred Tumlinson said Wednesday.

When the engine exploded, Tumlinson, 55, was sitting with his wife on the plane’s left side, in the second aisle from the back. The couple from George West, Tex., sent texts to their children, telling them the plane was going down and that they loved them.

“Did we think we were gonna make it?” Tumlinson asked, turning to his wife. “No.”

“I got another day of my life because of that lady and the co-pilot,” he said. “What do you want to know about [Shults] other than she’s an angel?”

Tumlinson described how soon after the explosion, a soothing voice came over the plane’s intercom.

“She was talking to us very calmly,” Tumlinson said. “ ‘We’re descending, we’re not going down, we’re descending, just stay calm, brace yourselves,’ ” he recalled Shults saying.

Finally, passengers were told to brace themselves, he said.

“ ‘Everybody, you gotta lean forward — hands up on the seat in the front, you gotta know that you’re coming down, and you’re coming down hard,’ ” Tumlinson said, becoming emotional while recounting the experience. “But she didn’t slam it down. She brought the bird down very carefully.”

The plane stabilized on the runway and, then, a moment of relief.

“She was so cool when she brought that down into the Philadelphia airport,” Tumlinson said. “Everybody just was applauding. I’m just telling you they were just applauding. It was amazing that we made it to the ground.”

The passengers were instructed to remain calm while medics came on board. Soon after, Shults came into the cabin to check on passengers.

“She came back and talked to every individual in there personally and shook every hand,” Tumlinson recalled, taking note of one other detail. “She had a bomber jacket on.”

Others on social media agreed and compared Shults with Capt. Chesley “Sully” Sullenberger, who guided his US Airways plane to safety in New York’s Hudson River in 2009.

In statement issued via Twitter on Wednesday night, Southwest Airlines acknowledged Flight 1380 was piloted by Shults, along with first officer Darren Ellisor. The crew was working with investigators and would not be conducting media interviews, the airline said. :

“As Captain and First Officer of the Crew of five who worked to serve our Customers aboard flight 1380 yesterday, we all feel we were simply doing our jobs,” the airline said in the statement. “Our hearts are heavy. On behalf of the entire Crew, we appreciate the outpouring of support from the public and our coworkers as we all reflect on one family’s profound loss.”

Shults’s  mother-in-law, Virginia Shults, said that as soon as she heard the pilot’s voice on the radio transmission online, she said, “That is Tammie Jo.”

“It was just as if she and I were sitting here talking,” Virginia Shults said. “She’s a very calming person.”

[While extremely rare, it is possible to get sucked out of an airplane]

Jennifer Riordan, an Albuquerque mother of two children and a vice president at Wells Fargo, was the passenger who died. Witnesses said two men and several flight attendants came to Riordan’s aid after she was pulled toward the blown-out window.

Riordan was seated in Row 14, the same row as the missing window, Sumwalt said.

Sumwalt said that investigators are aware of reports from passengers that Riordan was nearly sucked out of the plane, but that “we have not corroborated that ourselves.”

“We need to corroborate that,” Sumwalt said. “There’s 144 passengers on the airplane, many of whom were seated behind her. I think that we will have some good information based on that, based on the airplane and also based on the medical examiner’s report. I think we’ll be able to have a good idea of what actually happened.”

“The listed cause of death seems consistent with what we’ve heard in media reports,” he said, though he could not confirm the nature of her death. “The cause that we’re listing and have written on the death certificate sounds consistent with what has been reported,” he said, but he could not say whether the injuries were caused by “the fuselage or the air or the window or debris.”

Virginia Shults said that, “knowing Tammie Jo, I know her heart is broken for the death of that passenger.”

She was not surprised that her daughter-in-law was the pilot credited with the skillful landing. Friends and family members described Tammie Jo Shults as a pioneer in the aviation field, a woman who broke barriers to pursue her goals.

She was among the first female fighter pilots for the U.S. Navy, according to her alma mater, MidAmerica Nazarene University, from which she graduated in 1983.

A Navy spokeswoman said Shults was “among the first cohort of women pilots to transition to tactical aircraft.” After commissioning in the Navy in 1985 and finishing flight training in Pensacola, Fla., her duties took her to Point Mugu, Calif., where she was an instructor pilot on planes including the F/A-18 Hornet.

She was a decorated pilot who rose to the rank of lieutenant commander and twice received the Navy and Marine Corps Achievement Medal, along with a National Defense Service Medal and an expert pistol Marksmanship Medal, according to a biography provided by the Navy Office of Information.

Shults’s persistence in becoming a pilot goes back to her upbringing on a New Mexico ranch, near Holloman Air Force Base, Shults says in the book “Military Fly Moms,” by Linda Maloney.

“Some people grow up around aviation. I grew up under it,” she said. Watching the daily air show, she knew she “just had to fly.”

She recalled attending a lecture on aviation during her senior year of high school, in 1979. A retired colonel started the class by asking Shults, the only girl in attendance, “if I was lost.”

“I mustered up the courage to assure him I was not and that I was interested in flying,” she wrote. “He allowed me to stay, but assured me there were no professional women pilots.”

When she met a woman in college who had received her Air Force wings, Shults wrote, “I set to work trying to break into the club.”

But Shults wrote that the Air Force “wasn’t interested” in talking to her. The Navy let her apply for aviation officer candidate school, “but there did not seem to be a demand for women pilots.”

“Finally,” she wrote, a year after taking the Navy aviation exam, she found a recruiter who would process her application. After aviation officer candidate school in Pensacola, she was assigned to a training squadron at Naval Air Station Chase Field in Beeville, Tex., as an instructor pilot teaching student aviators how to fly the Navy T-2 trainer. She later left to fly the A-7 Corsair in Lemoore, Calif.

By then, she had met her “knight in shining airplane,” a fellow pilot who would become her husband, Dean Shults. (He also flies for Southwest Airlines.)

Because of the combat exclusion law, Tammie Jo Shults was prohibited from flying in a combat squadron. While her husband was able to join a squadron, her choices were limited, involving providing electronic warfare training to Navy ships and aircraft.

She later became one of the first women to fly what was then the Navy’s newest fighter, the F/A-18 Hornet but, again, in a support role. “Women were new to the Hornet community, and already there were signs of growing pains.”

She served 10 years in the Navy, reaching the rank of Navy lieutenant commander. She left the Navy in 1993 and lives in the San Antonio area with her husband. She has two children: a teenage son and a daughter in her early 20s.

Gary Shults, her brother-in-law, described her as a “formidable woman, as sharp as a tack.”

Her mother-in-law described her as a devout Christian, with a faith she thinks may have contributed to her calmness amid the midair emergency and landing.

“I know God was with her, and I know she was talking to God,” Virginia Shults said.

Whatever was going through her mind as she completed her landing, Tammie Jo Shults even made time to tell the control tower: “Thank you. . . . Thanks, guys, for the help.” 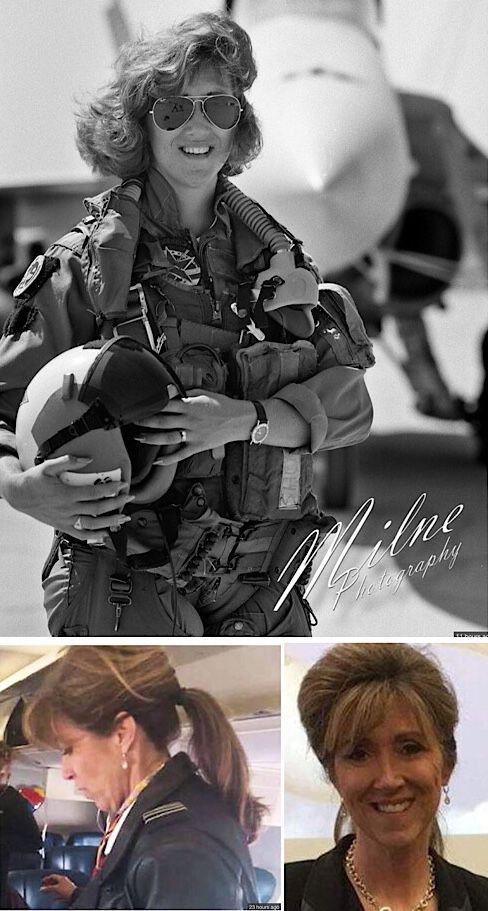