Auto-suggest helps you quickly narrow down your search results by suggesting possible matches as you type.
Showing results for
Search instead for
Do you mean
Reply
Topic Options
CrazyDaisy
Esteemed Contributor

Anyone who thought that as we start opening up that cases would not increase is foolish.  The purpose of the shutdown was to slow it down, not eliminate the threat of the virus.  There will be ups and downs with the number of cases.  It is something that we will need to live with as they develop treatments and hopefully a vaccine.

Someday, when scientists discover the center of the Universe....some people will be disappointed it is not them.
Report Inappropriate Content
Message 21 of 124 (638 Views)
Reply
6 Hearts
Marp
Esteemed Contributor

What is your source for this information?.

The full information can be found at thecity.nyc/coronavirus/2020/6/14/21290963/nyc-covid-19-trackers-skipping-floyd-protest-questions-even-amid-fears-of-new-wave

The more I learn the more I realize how little I know.
Are you setting an example or being an example?
Report Inappropriate Content
Message 22 of 124 (632 Views)
Reply
6 Hearts
QueenDanceALot
Honored Contributor

To further muddy the waters positive tests are highly accurate while false negatives are currently believed to be about 20%.

And while it seems very popular right now to keep an eagle eye on the effect of protests, the numbers will continue to be affected by the Memorial Day weekend activities and the many re-openings all over the country.  Those looking at these numbers continue to look at them for 5-6 weeks, not the rather popular but very shallow number of 14 days.

And as more things open up (and those being the higher risk categories) the numbers will continue to be looked at 5-6 weeks post each opening.

This thing is not "under control" and is far from over.

And I'm not being "hysterical", just realistic.

Agree with KKJ. We do the best we can do to protect self and others and accept that some in our society digs in their heels when it comes to anything requiring change for the greater good or even personal, temporary inconveniences. It just is.

Agree we're not out of the woods yet. Be safe. Be smart. Take care.

"I took a walk in the woods and came out taller than the trees." Henry David Thoreau
Report Inappropriate Content
Message 24 of 124 (614 Views)
Reply
4 Hearts
noodleann
Respected Contributor

That appears to be your personal conclusion.

Encouraging would be zero new cases so we can get back to normal. Other countries are succeeding so it is completely possible, but not us. 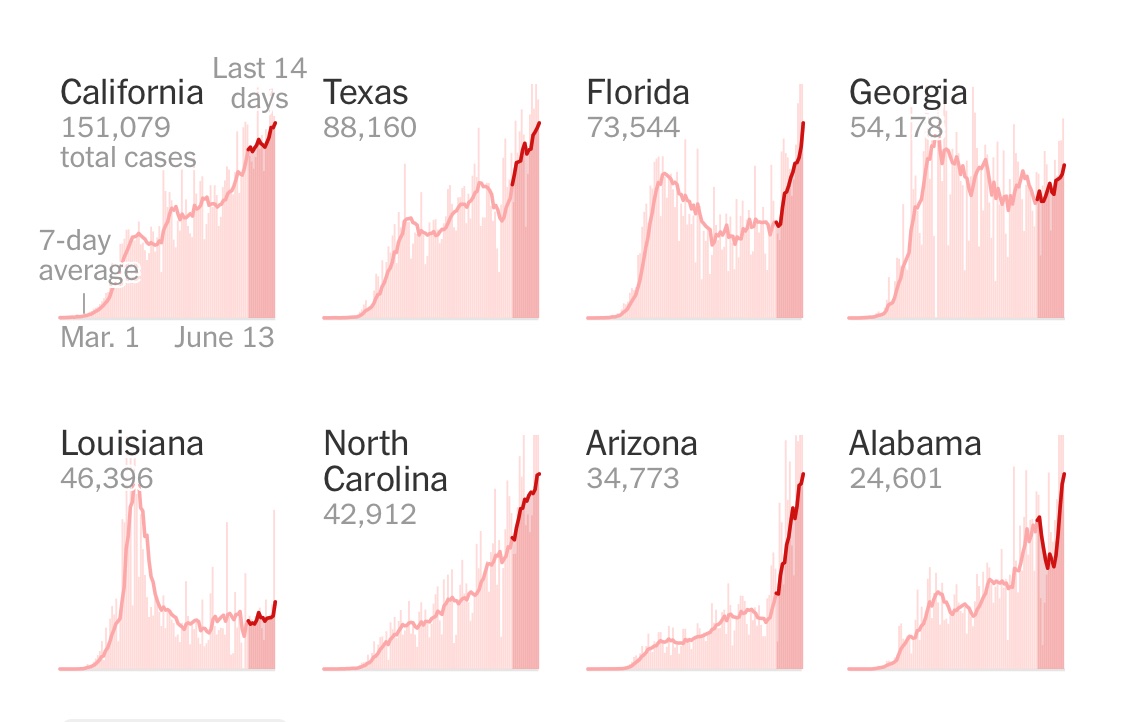 I've been poking around to see how long a person could still be shedding the virus (infect others) and the generally accepted numbers are between 4 and 11.5 days. A Chinese researcher claims it could be as long as 37 days but even in his study, the average was twenty days and he was looking for any trace of the virus, not necessarily a viral load that's transmissible.

If you use his worst-case number of 37 days for everyone infected in the US and go back 37 days to May ninth, that would mean that the 1,311,125 who tested positive by that date are no longer infectious now. When you subtract them from the 2,085,028 that have now tested positive you end up with a maximum of 773,903 people that could be capable of passing on the virus right now. In a country of 320 million that means that at most, only one out of every 413 people even could be capable of passing the virus on.

If you use the US standard of people no longer being infectious after 14 days you end up with 292,807 possibly infectious people and about a 1 in 1,093 chance of encountering an infected person who could spread the virus to you.

If you assume that the worst-case number of 773,903 are each infectious and infecting one other person a day then we should be seeing new infections of over seven hundred thousand per day. Instead, we're seeing numbers in between 14,000-24,000 per day. If you use the US numbers of 292,807 possibly infectious people you'd expect a one to one transmission rate to give you over two hundred thousand per day. We're getting less than a tenth of that in the number of new cases.

This virus has been around long enough now that we're getting some solid numbers. Even the worst-case numbers of how long someone could spread the virus make the odds of you encountering someone with the virus pretty low. The number of new cases relative to the number of people who could be spreading it makes a pretty good argument that the virus isn't spread all that easily. Practice safe behavior, but the odds are you'll be safe as long as you do what you should do.

This is what I've been saying!

The fear, panic and hysteria has been and totally overblown!

People freaking out and having a total meltdown just because someone isn't wearing a mask, and acting as if every single person in the county is going to the virus and die from it, when that is simply not the case.

If the news told us what you did @gardenman , then people wouldn't tune in and watch, hence, less $$$.

What you said makes absolute sense.

The Sky looks different when you have someone you love up there.
Report Inappropriate Content
Message 27 of 124 (588 Views)
Reply
5 Hearts
bhvbum
Respected Contributor

I did what you suggested and "Google it" and there is one article and it doesn't jump to your conclusions at all.  In fact it makes sense not to ask specifically about protesting because you are leading the person being interview:

In Nassau County, health officials...don't specifically ask individuals who test positive whether they’ve attended protests, they do ask them where they’ve been recently.

“We ask them questions about where they’ve been so that we can gauge who may be at risk,” said Mary Ellen Laurain, a spokesperson for the Nassau County Health Department. “It may come out as part of the interview, but we ask more open-ended questions.”

That appears to be your personal conclusion.

@noodleann  It is not her personal conclusion.

Mark Levine has stated as such-that the protesters would not be causing any spikes.  He is the head of NYC's health committee.

It is foolish to hire 1000 tracers but leave out a population who had such close contact.

While Cuomo is asking for people to be tested, DeBlasio feels tracing any protestor who tests positive is not needed.

The articles are out there for everyone to read.

@MorningLover   You are correct and Mark Levine has stated as such.

He is the head of the city council's health committee, working under DeBlasio.

I believe a lawsuit has been filed by Christian and Jewish congregations against DeBlasio for not allowing services.