Auto-suggest helps you quickly narrow down your search results by suggesting possible matches as you type.
Showing results for
Search instead for
Do you mean
Reply
Topic Options
QVCkitty1
Honored Contributor

I saw this online this morning and I thought it was a good quote, " Rudeness is a weak man's imitation of strength. " I googled it and it was by Eric Hoffer. Anyway I will try and remember it when I encounter rudeness or when I myself feel I've been rude.  Just a thought for the day. 🌷

" You are entitled to your opinion. But you are not entitled to your own facts."
Daniel Patrick Moynihan
Report Inappropriate Content
Message 1 of 28 (3,144 Views)
Reply
38 Hearts
Snowpuppy
Respected Contributor

Exactly.  It goes along with what I've said for years - when people have to constantly spend their energy tearing down others, I've found that it's the only way they seem to know how to feel better about themselves.

Clearly, that's warped but that's the way it seems to be.  It makes them feel better about themselves when they place others beneath them.

I just feel sorry for these folks and try not to engage.   If I don't care about somebody (some online stranger as a rule), they cannot hurt me.  They are just hurting themselves but they don't even seem to know better.

The following are some of the reasons why people are rude

1. They are having a seriously bad day.

Watch out for repeat offenders, though.  They aren't having a bad day every day.

2. They hold some kind of negative feeling towards you.

3.  They have low self-esteem.

Sometimes people with low self-esteem attack others. They bring down the people around them so that they can feel better about themselves.

4. They do not know how to hold back their negative emotions.

These people tend to overreact to even the smallest issues.

5.  They were not properly raised.

People who were raised to think they were supposed to have everything they want in life. They will do whatever they feel is necessary to ensure they get their way.

There are people in this world who think they are better than everyone else. They think you are beneath them. This is all too common in this day and age.

7.  They are stressed and do not realize they are rude.

8. Their communication skills are not as developed as they should be.

9. They have poor self-awareness.

10. They have some kind of personality disorder.

Not everyone has a personality disorder but they are much more common than most people realize. 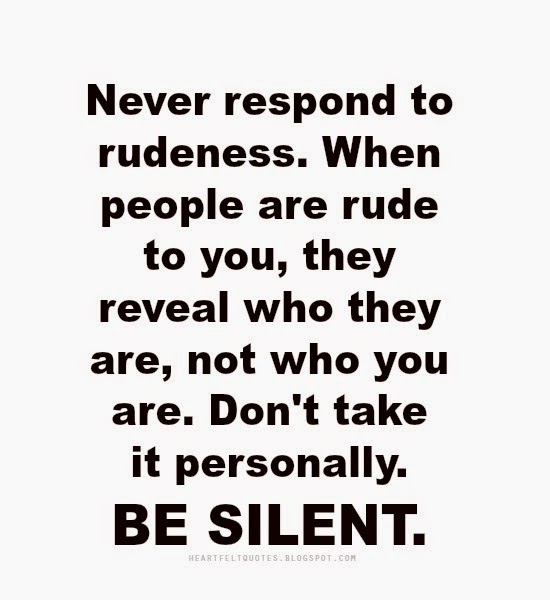 I just suddenly become hard of hearing and make it clear I can't understand them.

I read a quote that said something like: When someone says something to you, that is their gift to you. If you refuse to accept the gift of an insult or rudeness, that means the gift remains in the hands of the giver. Where it belongs.