Auto-suggest helps you quickly narrow down your search results by suggesting possible matches as you type.
Showing results for
Search instead for
Do you mean
Reply
Topic Options
Highlighted
gidgetgh
Honored Contributor

I specifically remember buying it at Curtis Farms grocery store in Quincy, MA. They carried a very small selection record albums right by the front door.


Why is it, when I have a 50/50 guess at something, I'm always 100% wrong?
Report Inappropriate Content
Message 21 of 56 (479 Views)
Reply
4 Hearts
Highlighted
Teddie
Trusted Contributor

I just looked up Michael Nesmith to see his status. I would never have recognized him. Seems he’s been through some serious heart issues in the past.

Bette Nesmith Graham (she was divorced from Michael’s father in 1946 and remarried in 1964) came up with the idea of using a small bottle of waterbase paint to correct her typing errors while she was an executive secretary with Texas Bank & Trust in Dallas in 1951. She supplied bottles of the fluid to other secretaries at her workplace (under the name “Mistake Out”) for several years; then, in 1956, she improved the formula, changed its name to “Liquid Paper,” and set out to trademark the name and patent her product. After IBM passed on her offer to sell Liquid Paper to them, Bette started marketing the product on her own. Liquid Paper, Inc., did not become profitable for several years, and it was not until the mid-1960s that Liquid Paper correction fluid began to generate substantial income for its inventor.

Liquid Paper was sold to the Gillette Corporation in 1979 for $47.5 million (plus a royalty on every bottle sold until the year 2000). Bette Nesmith Graham died in 1980, leaving half her fortune to her son Michael and half to philanthropic organizations.

Very sad to hear this. I loved them all but Peter was my favorite.  😔

So sorry to hear this!  I had a crush on the Monkees way back when!

This makes me sad, but remembering The Monkees is sweet. 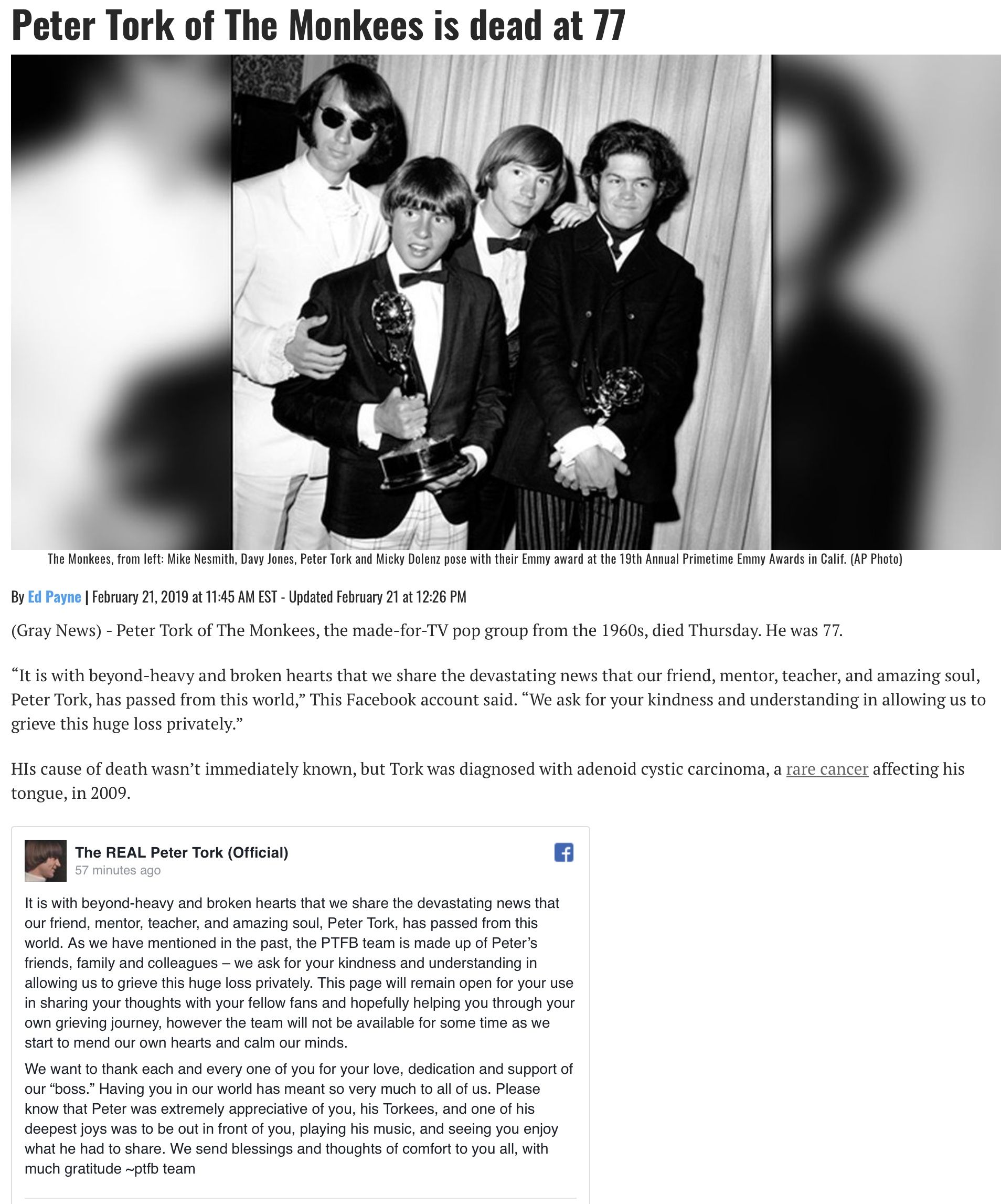 Who thought it was a good idea to take the entire screen, cut it into thirds and focus on only the middle bit?  Maybe everyone's TV is too big for the picture/video to go from side to side?

Back to the Monkees...who's left?  Anyone?

I have four of their albums, and framed them a few years back.  Was obsessed as a kid.

Saw them in concert in 1967, Peter and Mike were my faves.

This makes me sad, but remembering The Monkees is sweet.

Who thought it was a good idea to take the entire screen, cut it into thirds and focus on only the middle bit?  Maybe everyone's TV is too big for the picture/video to go from side to side?

Back to the Monkees...who's left?  Anyone?