Auto-suggest helps you quickly narrow down your search results by suggesting possible matches as you type.
Showing results for
Search instead for
Do you mean
Reply
Topic Options
Highlighted
morning lover
Respected Contributor

The Times of London reported that one of Harry’s old appointments, Captain General of the Royal Marines, will be given to a new royal: Princess Anne. She will be the first woman to hold the title.

According to the Sunday Times, Queen Elizabeth is expected to formally announce Anne's appointment soon. Harry will attend one last "farewell engagement" with the Royal Marines, when he and Meghan return to the U.K. in the coming weeks to take part in their final events as working royals. Anne will appear at the Royal Marines engagement as well. 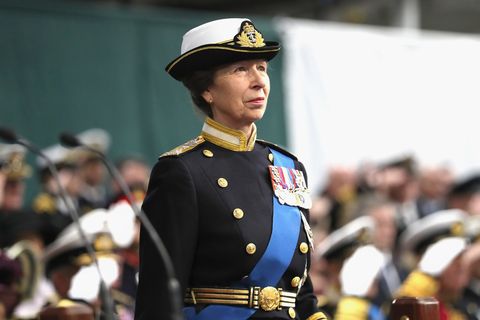 ANNE ATTENDS THE COMMISSIONING OF THE HMS QUEEN ELIZABETH IN 2017.

Prior to Harry's tenure, which lasted a little over two years, Prince Philip had been Captain General for 64 years. The long serving royal only stepped back from the role in 2017, when he retired from his public duties at the age of 96. Per the Times, Philip was "particularly keen" for his daughter to get the gig.

Philip and Anne have often been said to share a close bond. "Philip always had more fun with Anne," Eileen Parker, wife of Philip's friend Mike Parker, told the Daily Mail in 2017. "Charles is more like the Queen, while Anne is very like Prince Philip." If anyone can handle the extra workload, it's Princess Anne.

That's wonderful and I have read that she works very hard. Good for her. I'm sure that she will step into this role and do a great job.  I loved learning that she is close to her father, I am too!

It's actually a job.  It's a ceremonial honor and role will be to shake some hands, give some some speeches and represent the Queen.  The things she has always done so admirabably.  She works hard and I respect her for declining titles for her children.  She wanted them to find their own places in the world.

Yay for Anne!!  And kudos to the Queen for appointing her!

“One of the penalties for refusing to participate in politics is that you end up being governed by your inferiors.” ~ Plato
Report Inappropriate Content
Message 6 of 31 (2,899 Views)
Reply
11 Hearts
Highlighted
PamfromCT
Respected Contributor

Good for her!  She has been working long and hard for so many years and avoiding the spotlight.

I read today ,that her son ,and his wife are getting a divorce.
When you lose some one you L~O~V~E, that Memory of them, becomes a TREASURE.
Report Inappropriate Content
Message 8 of 31 (2,828 Views)
Reply
1 Heart
Highlighted
cherry
Honored Contributor

I think the marines traded up...

@goldensrbest What does this divorce have to do with anything?