Auto-suggest helps you quickly narrow down your search results by suggesting possible matches as you type.
Showing results for
Search instead for
Do you mean
Reply
Topic Options
Highlighted
Goldie76
Esteemed Contributor

(I am fervently hoping there is no foul play involved, but I sense something is not right with this young woman's disappearance.  Would a young lady with future travel plans drop out of sight like this?  She had returned to her home state for her grandmother's funeral and then flew back to Utah, arriving at 1:00 a.m, where she went to school and worked.  Took a Lyft to an address that is not her home address.  Has not been heard from since.  In another article I read that she was to fly to Los Angeles today, 6/23, after taking some midterm exams.  Odd and disturbing.)

She texted her parents to say her flight landed safely, they haven't heard from her since.

Mackenzie Lueck, a 23-year-old University of Utah student, texted her parents on June 17 to let them know she had landed safely at the Salt Lake City airport, her father told Fox News. Nobody has heard from her in the week since.

According to police, Lueck landed home from a trip around 1 a.m. She then ordered a Lyft to an unfamiliar address in North Salt Lake City, The Salt Lake Tribune reports. According to friends, Lueck’s phone has been off since she went missing, her car is still at her home, and her luggage hasn’t been found. She has not shown up to work, or class, since that early morning ride.

Lueck's dad told local Fox station KTSU his daughter texted he and his wife to tell them her flight landed around 1 a.m. on Monday, June 17. Her family officially reported her missing that Thursday.

Though Lueck has been missing for nearly a week, and police are investigating her disappearance, a formal search party has not been set up, the Tribune reports.

In a press release issued by the Salt Lake City police department on Saturday, investigators said they have not “discovered any information that would lead us to believe that Mackenzie has been harmed or is in danger at this time.” In the same release, police also said “detectives are concerned for Mackenzie’s welfare.” 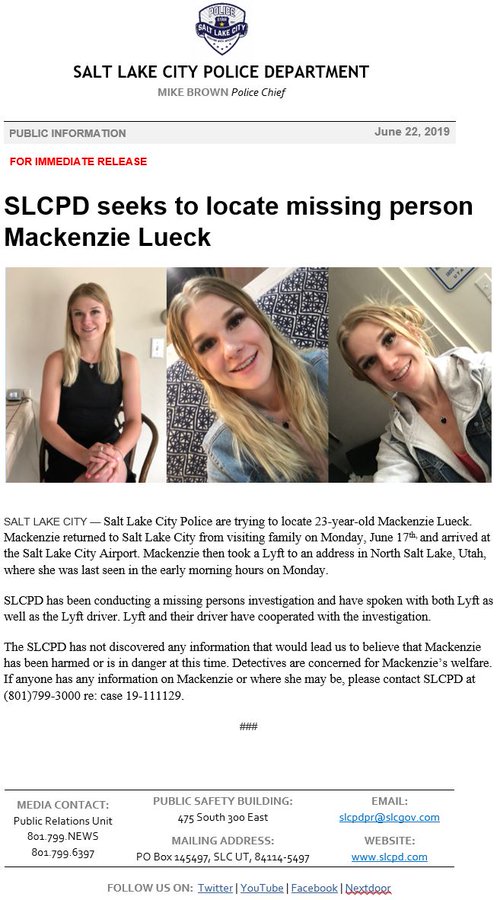 The ride share company told Fox News that the car’s route showed no irregularities, Lueck was successfully dropped off at her desired destination, and the driver began picking up more passengers immediately after her ride was complete. Authorities said they've been in contact with Lueck's apparent driver, but have not provided details of their account.

Lyft told Fox News in a statement on Sunday that they “recognize how scary this must be for those who know and love Ms. Lueck... The safety of our community is fundamental to Lyft and we are actively assisting law enforcement with their investigations.”

Lueck, who reportedly goes by “Kenzie,” is a member of the Alpha Chi Omega sorority, according to the Tribune. Her sorority sister Ashley Fine has been organizing volunteers to help in the informal search. Fine told The Salt Lake Tribune she does not know why her friend, who does not have a significant other, would have taken a ride to the address in North Salt Lake, instead of going directly to her home.

As part of the community effort to find her, Lueck's friends organized a postering event at Liberty Park in Salt Lake City on Saturday. A Facebook page with over 2,000 members has also been set up to help spread the word about her disappearance.

“Everyone thinks that there’s danger in this story,” Fine told a local abc news affiliate. “Things aren’t adding up. She had another trip planned,” Fine said. “She’s making those plans with friends and family to have plans for the future. I don’t think she would hurt herself or anything like that... If you’re in a bad situation, please reach out... We’re really concerned for you.” 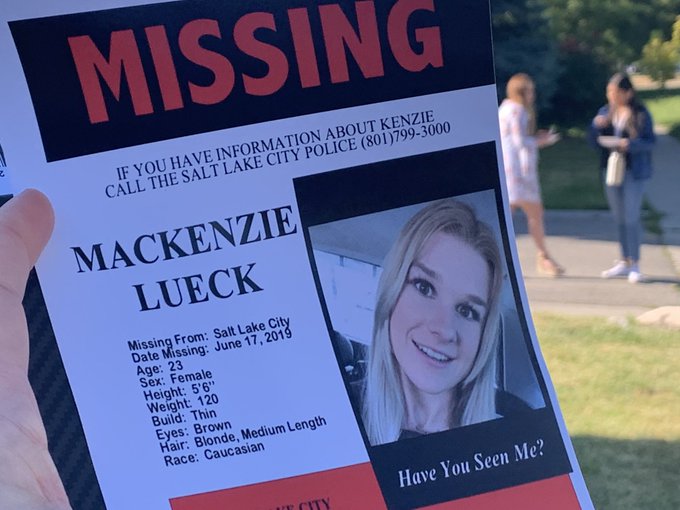 Friends of Mackenzie Lueck are passing out these fliers near the University of Utah. Lueck hasn’t been heard from since Monday.

Something seems off.  If she was going to drop out of sight, why text her parents to say she landed.  She was supposed to go back to CA to attend a wedding this weekend.  When she wasn't on the plane, her parents tried to locate her and found out she hadn't returned home from the funeral.

There's no talk about what was at the address she asked to be dropped off.  Lift didn't have much to say.  Her phone hasn't been used since the text to the parents.  Her bank account hadn't been touched.  It doesn't sound good.

I'll pray this lovely young woman is safe, however, to be honest I fear the worst.  The facts tend to lean toward a very bad ending, as I said I will pray for her.

The moving finger writes; And having writ, Moves on: nor all your Piety nor Wit Shall lure it back to cancel half a Line Nor all your Tears Wash out a Word of it. Omar Khayam
Report Inappropriate Content
Message 3 of 100 (3,619 Views)
Reply
2 Hearts
Highlighted
sue311
Regular Contributor

I saw this story on the news yesterday. It's very strange. I was thinking perhaps she was meeting someone she met online trying to run away. Then again she may have been killed by a stranger. I feel bad for her family.

Because that's where the focus of the investigation is.  This disappearance is not a LYFT issue.  The driver took her to the exact address that she put in the LYFT app, he dropped her off and continued picking up other passengers.  There was not break in work for him.  They also can tell if she completed the transaction, meaning did she pay and rate the driver.  I don't believe they disclosed that.  Their investigation centers around who she has been in contact with near the time of her disappearance and why she went to that address.  She went there for a reason.  Of course  the police know much more about this than they are telling.  It's an on going investigation.

Hubby and I  flew in from Germany arrived at midnight. There was literally no one there. Found the taxi area where a gentleman called us a cab. I was a little scared. If it hadn't been for him I don't know what we would have done.

I think that headline is totally misleading. Definitely does not appear to be a Lyft issue.

In my opinion this headline would have more accurate:

University of Utah Student Mackenzie Lueck Missing for Nearly a Week After Visiting An Address Police Are Not Disclosing At This Time.

I guess throwing in Lyft gives the story more punch.

I think that headline is totally misleading. Definitely does not appear to be a Lyft issue.

In my opinion this headline would have more accurate:

University of Utah Student Mackenzie Lueck Missing for Nearly a Week After Visiting An Address Police Are Not Disclosing At This Time.

I guess throwing in Lyft gives the story more punch.

Yes, they do that because there is bias against ride share apps by the people who have never used them and don't have foggiest idea of what they really are or how they work.  The media caters to that.

The latest from the police is that the Lyft driver says he left her at a park, where she was met by someone in a car.  The chief of police said it was Hatch Park, for those who might know this area of Utah.

Oh my, this is getting murky.

The driver reports that she did not seem in distress.