Auto-suggest helps you quickly narrow down your search results by suggesting possible matches as you type.
Showing results for
Search instead for
Do you mean
Reply
Topic Options
Sunshine45
Honored Contributor

8.4 magnitude, within the last hour. Tsunami possible. Don't know much else yet.

Was the earthquake centered near a major city .... or what?

At least 15 people are dead after one of the most powerful earthquakes in Mexico’s history struck late Thursday on its southern coast, toppling buildings, damaging hospitals and sending skyscrapers swaying hundreds of miles away.

The U.S. Geological Survey said the earthquake hit about 60 miles off the coast of Chiapas state with a magnitude of 8.1 — slightly stronger than the devastating magnitude 8 quake of 1985 that killed thousands of people in Mexico City.

While Mexican seismologists initially claimed Thursday’s earthquake was a magnitude 8.4, the National Seismology Institute said Friday that it had revised its measurement and now believes it was an 8.2.

via the LA TIMES

Christmas will always be as long as we stand heart to heart and hand in hand. - Dr. Seuss
Report Inappropriate Content
Message 11 of 18 (287 Views)
Reply
2 Hearts
qvcaddiction
Respected Contributor

Everything starting to sound very Biblical.

I just communicated with my friend in the Sand Diego area, and she said she didn't feel any tremors or anything. It was fairly far south in Mexico.  And yes, everything that is going on everywhere seems very apocalyptic, and I myself am not prone to cite religous teachings.

Tremors were felt as far away as Mexico City-600 miles away.

""Out beyond the ideas of right-doing and wrong-doing, there is a field. I will meet you there." -Rumi
Report Inappropriate Content
Message 14 of 18 (222 Views)
Reply
1 Heart
garmer
Valued Contributor

8.4 magnitude, within the last hour. Tsunami possible. Don't know much else yet.

Was the earthquake centered near a major city .... or what?

I posted a map up above showing where it was. @sidsmom  Unfortunately the states of Oaxaca and Chiapas are some of the poorest too.

There have been other quakes in the area in the past few hours; not sure if aftershocks but registering 4.0 +/- .

""Out beyond the ideas of right-doing and wrong-doing, there is a field. I will meet you there." -Rumi
Report Inappropriate Content
Message 17 of 18 (116 Views)
Reply
1 Heart
Highlighted
corita
Esteemed Contributor

Tremors were felt as far away as Mexico City-600 miles away.

While I lived in Mexico City, we went thru several earthquakes!  Some very strong and others just slight tremors!  Pretty startling feeling!

There is a renown monument - called El Angel, the Angel - on the main avenue going through the City. It is one of the most famous landmarks in Mexico City. The column base plus statue is about 148 feet high. So many memories of seeing that beautiful monument!

Yesterday, I watched a news video that showed that statue swaying from side to side during this week's earthquake. The center of the quake was 650 miles away from the city!!    Just held my breath!!! 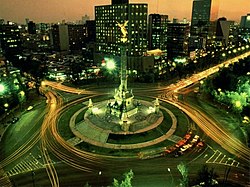