As a lifelong fan of Esther Williams (over a span of almost seven decades), I am unable to let this milestone pass without a public notice here.  Thank you to the poster under "TV and Movies" who drew my attention to the hundredth anniversary of Esther's birthday.  As I commented on that forum's post, I always remember the day of her birth but I had not remembered the year.  She was born August 8, 1921.

Of course Esther was a swimming champion, but she also had huge box office appeal.  As a child, I was never so happy as when I watched her MGM water-ballet spectacular presentations.  Those were the days!

TCM is devoting its air time today to her.

Here's to you, Ms. Williams.  There was no one to equal you in your particular niche of the movie industry.  She truly was a "Million Dollar Mermaid."  May you rest in peace in a celestial pool with turquoise water. 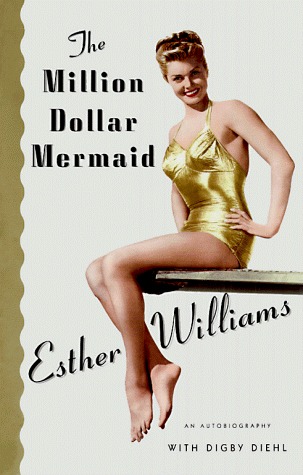 I bet she is still a bathing beauty, I hope Lorenzo Lamas is there to celebrate with her.  He has said, he loves her so much, just as much as his real Mom, who is Arlene Dahl.

Am I the only one among you who adored Esther Williams? When I confess to having several scrapbooks devoted to her, as I did today at work, people look at me in a peculiar way. I was really into swimming when I was young and, I admit, a little too hooked on Hollywood-style glamour. With all that, Esther was quite naturally the one for me to admire.

After watching Diane Sawyer tonight, I don't feel so alone in my admiration for the famous mermaid. It seems that Diane, too, had great respect for Ms. Williams from a young age. Ms. Sawyer wrapped up her piece with something like this: "The young girls knew strength and daring when they saw it." Maybe that was it. The truth is, I was a bit daring and challenging in my day. I don't know, but I shed a tear upon learning of the passing of my favorite movie star and heroine.]

I bet she is still a bathing beauty, I hope Lorenzo Lamas is there to celebrate with her.  He has said, he loves her so much, just as much as his real Mom, who is Arlene Dahl.

You know why I love her movies? The Technicolor. Ravishing gorgeous Technicolor. All the beautiful colors just feed my soul.

And her outfits! She could wear clothes almost as well as Grace Kelly.

My favorite Esther Williams movies to watch when I need a real Technicolor fix and to covet all of Esther's clothes are Thrill of a Romance, Neptune's Daughter, and Easy to Wed. 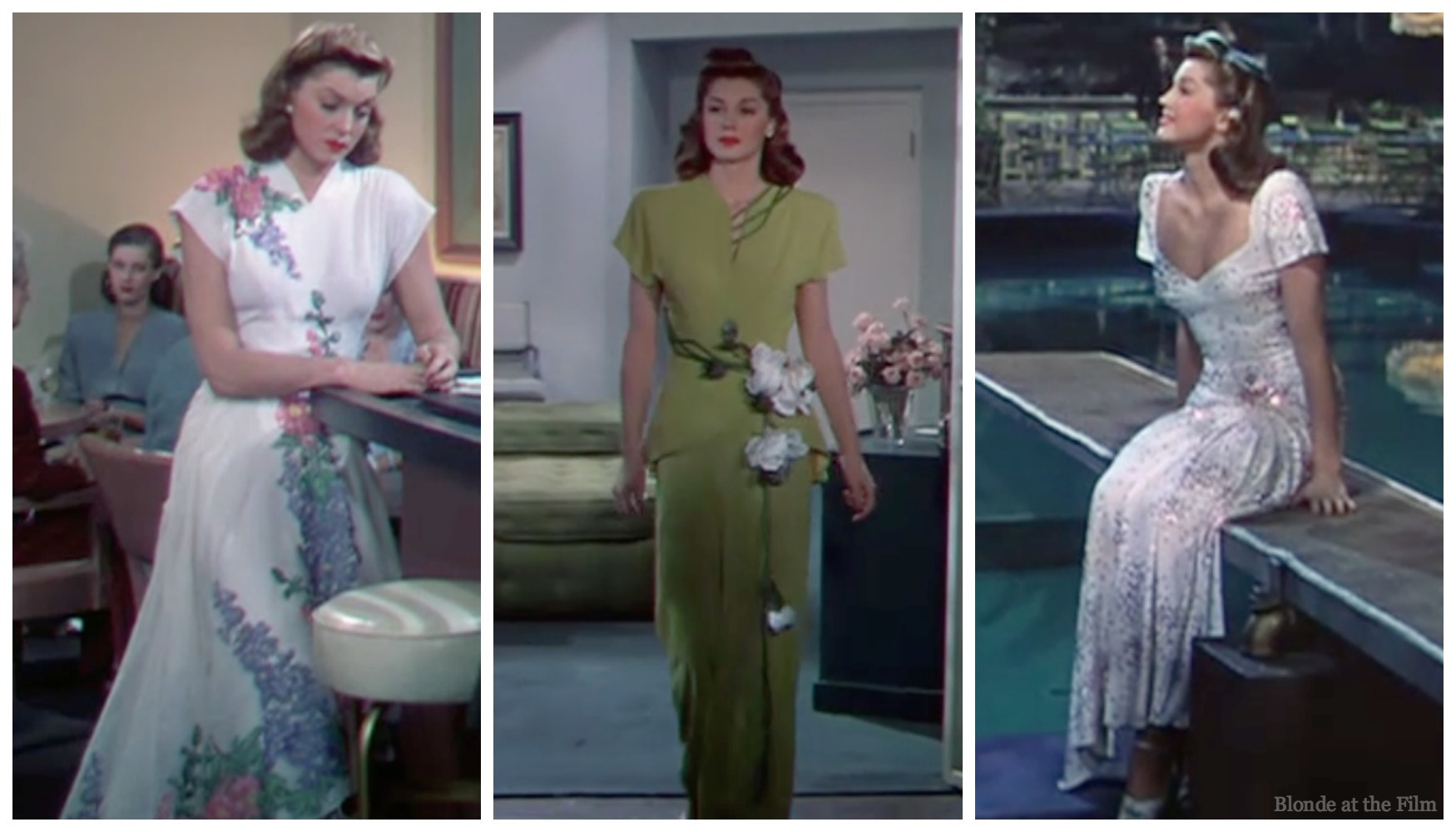 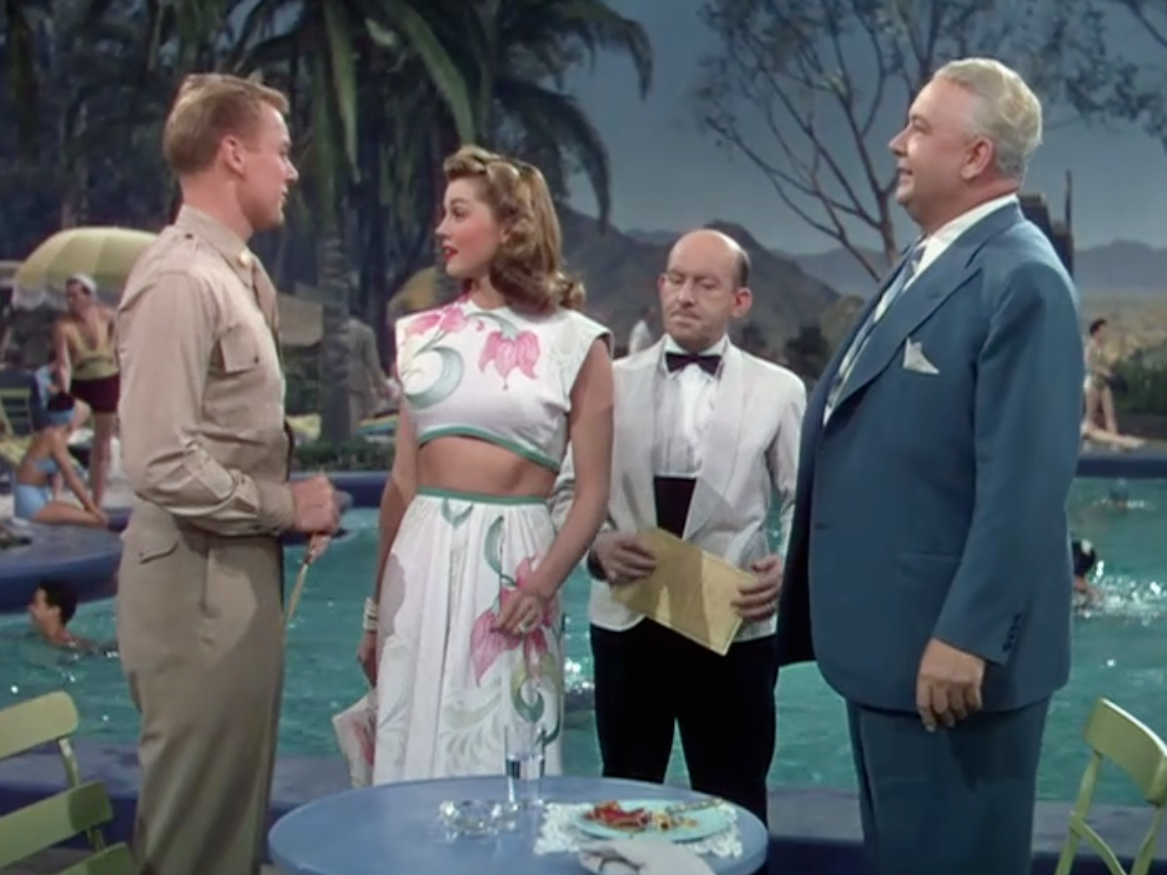 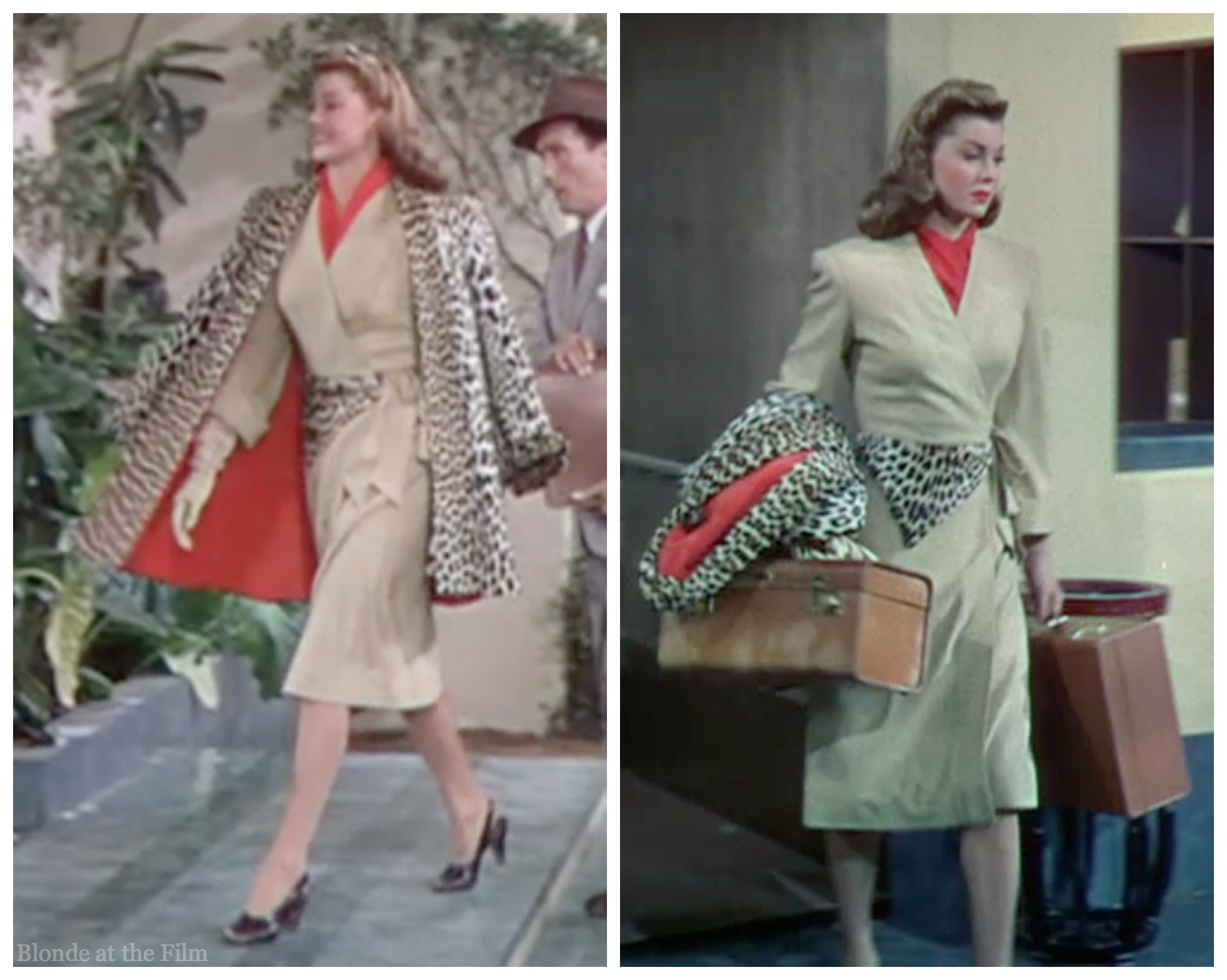 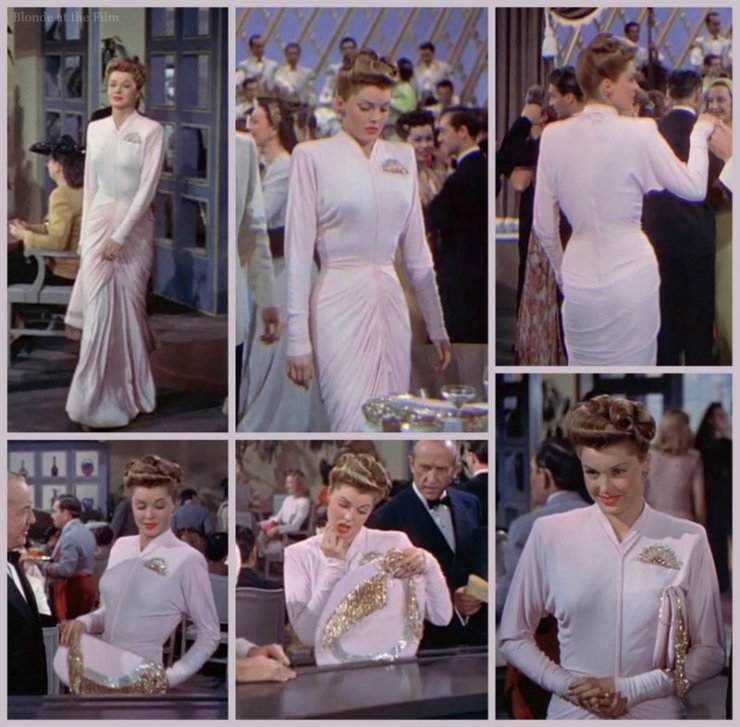 To give credit, most of these images are movie thumbnails from the site: https://theblondeatthefilm.com.

Several years ago on the Linea forum, some of us commented about the appealing wardrobe of several of the female stars at MGM.  The gifted designer Helen Rose did most of the costumes and general wardrobe for Esther Williams.  She also created so many of the gorgeous wardrobes for Elizabeth Taylor in several of her Technicolor hits.

As I recall, one of the Linea Ladies added that Helen Rose designed Grace Kelly's wedding gown, something I had forgotten.

What always impressed me about the colors Esther wore was that they flattered her brownette-with-a-few-blonde-streaks look so perfectly.  Really, Helen Rose was a master at choosing just the right shade from a color family for brownette Esther and from a different palette for brunette Elizabeth.  It was a sort of design wizardry in my book.  Pay attention to the greens for Esther as opposed to those for La Liz.  I realize this is basic to designing, but Helen Rose chose the best shade of a color for her stars.

Although I seem to have had a natural predilection for gold over all other metals, the accessories Helen Rose selected for Esther informed my tastes considerably:  Helen and I never met a chunky pair of gold earrings or substantial bracelet that we didn't like.

For her everyday wardrobe in most movies, Esther had a softly tailored look that I admired.

In my scrapbooks, I have quite a few still shots in color of Esther wearing the Helen Rose look.

The studio really worked their magic with her.  She would be under water and pop out of the water hair still slicked back and her make up perfect.  She always said she felt more comfortable in water than anyplace else.  She made those scenes look so easy under water.

She looked stunning in the long, white gown.  She was all wrapped up with long sleeves, dress and up to the neck.

@golding76 I have a new reference point! I'm sure I knew all about Helen Rose at one point and then forgot about her. Thank you so much for inadvertently sending me down this rabbit hole today. I have a major affinity with Helen Rose's style.

She did the costumes in several of the big MGM movies that I absolutely love for the costumes: Harvey Girls, Designing Woman, and most of all High Society. My favorite style icon look out of them all was designed by her. I often wear red loafers as a substitute for these famous red espadrilles. 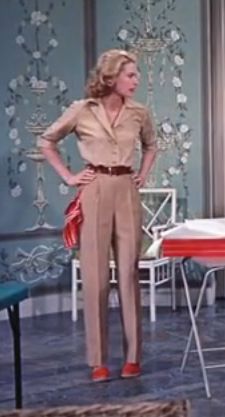 She designed this famous dress for Liz Taylor for Cat on a Hot Tin Roof too. 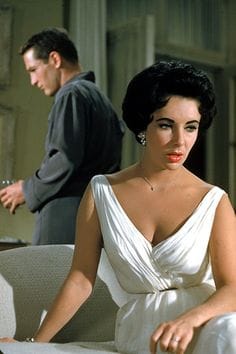 I wish her book Just Make Them Beautiful: The Many Worlds of a Designing Woman  were still in print. I'm not spending $200 to get a rare copy, but I'd love to read it.

To cap off this celebratory day, I tuned in to TCM and found that Esther's flick Easy to Love is airing.  Having, out of curiosity and sentimentality, pulled out my Esther Williams scrapbooks, I turned to two pages devoted to the new film Easy to Love that the fanzine Photoplay most likely produced and that I dutifully pasted in my book of memories.

This is from a 1953 issue of Photoplay or the secondary movie fan magazine whose name I do not recall.

A caption under a photo of Esther posing in a bathing suit against what looks like a long floatie standing behind her reads:  "No wonder she's decorating our cover this issue.  The star of MGM's Easy to Love is Mrs. Ben Gage in private life and the mother of three."

Beneath another photo of Esther in a bathing suit and some sort of bathing headdress is this caption:  "Between scenes of the Technicolor musical, Esther models one of her eye-filling costumes for us.  This is real glamor [sic]!"  (I guess they did not spell "glamour" with a "u.")

There is a posed photo of Esther with Van Johnson and Tony Martin (no caption) as well as another candid shot of the three on set.

This is fabulous.  A trip back in time.

[On the next page is a lengthy interview with her father, Lou Williams (as told to Jane Morris).  I can't wait to reread this.  It says he calls her "Champ."]