An extremely rare pink manta ray called Inspector Clouseau has been photographed off the coast of an Australian Island.

The 11-foot male reef manta ray is the only pink specimen of his species known to exist and was first identified in 2015.

He got his name from the bumbling detective from the famed Pink Panther movie franchise.

His unique colouration is authentic but harmless and likely to be the result of a genetic mutation similar to albinism, experts believe.

The two-tonne marine beast lives around Lady Elliot Island and a series of stunning photographs were taken by a bemused Finnish photographer called Kristian Laine.

Clouseau is monitored by Project Manta, an Australian organisation, which attempts to learn how the bizarre colouration came to be.

Mr Laine said: 'I have read multiple different answers, they have analysed a sample of his skin and they have changed their theories many times and still don't seem to know for sure.

'I think the latest theory is that it's some sort of a genetic mutation causing a pink of melanin to be expressed.'

Mr Laine's theory is in agreement with leading experts who say the most likely explanation is a phenomenon called erythrism.

He said: 'It is very rare because I think there has only been around eight to ten sightings since the first sighting in 2015.

'I felt amazed afterwards but also felt like when I was in its eye level I felt like he was smiling at me.

'He was big and I got into a touch range but obviously didn't touch, I was super close, about a metre at best.

'The whole encounter lasted for about 20 - 30 minutes and he was part of a mating manta train that was just circling around a cleaning station.' 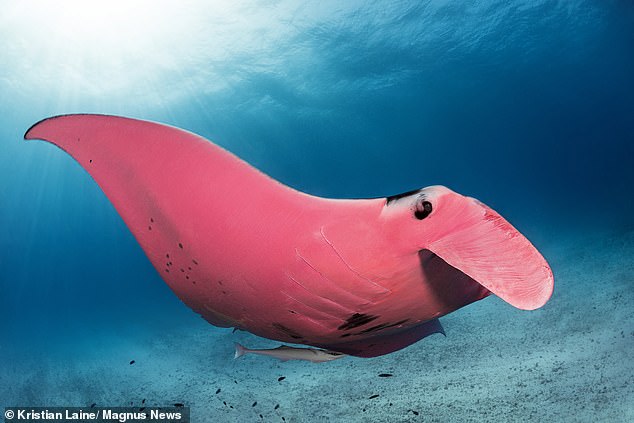 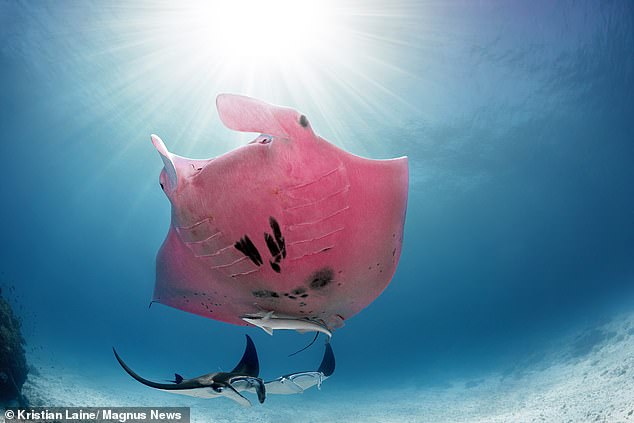 You never know how strong you are until being strong is the only choice you have.
Report Inappropriate Content
Message 1 of 13 (770 Views)
Reply
25 Hearts
Highlighted
naturalfan
Valued Contributor

I just have to say that is really beautiful.

Besides being amazed at his color, I'm also amazed at his size in the last picture, compared to the size of the 'regular' sized Manta's below him!

You never know how strong you are until being strong is the only choice you have.
Report Inappropriate Content
Message 3 of 13 (656 Views)
Reply
5 Hearts
Highlighted
spider woman
Respected Contributor

What a beautiful creature from the sea!  I love nature, animals, sea life, mountains , oceans, lakes, all that is for us to appreciate and take care of and not harm.  Sadly many do harm but I won't get into that.

Thanks for this article and picture of a pink Manta Ray, so interesting!

That is absolutely beautiful. That is just amazing. Thank you for sharing! It's awesome to see the creatures living in our oceans.

“Green is the prime color of the world, and that from which its loveliness arises.”
(Pedro Calderon de la Barca)
Report Inappropriate Content
Message 8 of 13 (487 Views)
Reply
3 Hearts
Highlighted
feline groovy
Honored Contributor

“Green is the prime color of the world, and that from which its loveliness arises.”
(Pedro Calderon de la Barca)
Report Inappropriate Content
Message 9 of 13 (470 Views)
Reply
1 Heart
Highlighted
phoenixbrd
Esteemed Contributor

@IG Thanks for this amazing share.  Can hardly believe it is real....what a special privilege it would be to witness this extraordinary animal.  Love being introduced to the wonders of nature