Auto-suggest helps you quickly narrow down your search results by suggesting possible matches as you type.
Showing results for
Search instead for
Do you mean
Reply
Topic Options
Mz iMac
Honored Contributor

(CNN)A pair of red sequined slippers from the classic 1939 film "The Wizard of Oz" has been found, 13 years after they disappeared from a Minnesota museum, law enforcement said Tuesday.
But the investigation continues into who's responsible for the 2005 theft of the cherished piece of movie memorabilia.
"We reached the first goal, the recovery, and it's a great day," North Dakota United States Attorney Christopher Myers said. "But we're not done."

The slippers are one of four known pairs that actress Judy Garland wore in her role as Dorothy in the classic film. They disappeared in August 2005 from the actress' namesake museum in her hometown of Grand Rapids, Minnesota, sparking years of rumors and dead-end leads.

Finally, a tip last summer led law enforcement outside of Minnesota, prompting the FBI's involvement. This summer, the shoes were seized in an undercover operation in Minneapolis, the FBI said.
"There's a certain romance in these types of schemes, sometimes sophistication, but at the end of the day it's a theft," Myers said.
"These types of offenses not only deprive the owner of their property but all of us," Myers said. "This type of cultural property is important to us as a society. It reflects culture, it holds our memories, it reflects our values."
'We were literally crying'

The long-lost slippers were shown to reporters Tuesday at the FBI's Minneapolis headquarters in a news conference conducted in reverential tones, with repeated references to rainbows and the memorable quote "there's no place like home."
"They're more than just a pair of shoes, the slippers. They're an enduring symbol of the power of belief," Grand Rapids Police Chief Scott Johnson said.

Memorabilia collector Michael Shaw loaned the slippers to the Judy Garland Museum for Grand Rapids' annual "Wizard of Oz" festival in 2005. Shaw rejected the museum's offer to store them in a vault each night because he didn't want people handling the delicate shoes by moving them daily, he said in the 2016 documentary, "The Slippers."
The slippers were stolen in 2005 from the Judy Garland Museum in Grand Rapids, Minnesota.
"But most importantly, I was assured that the museum had security," said Shaw.
A burglar broke in through the museum's back door, according to the Grand Rapids Police Department. The thief smashed a glass case resting on a wooden podium in the museum's gallery and stole the slippers, which were insured for $1 million. The alarm did not sound to a central dispatch station and no fingerprints were left behind, police said in a statement.
The theft was "the biggest thing that ever happened to our museum," museum co-founder Jon Miner told CNN affiliate KQDS in 2015. "We were literally crying."
Investigators had no evidence, aside from a single sequin that had fallen off one of the slippers. As the mystery deepened, museum staff became the target of rumors of an inside job, allegations they vehemently denied.
"We're the ones that want to find them because they were entrusted to us," Miner said in "The Slippers."

Ten years after the theft, the museum worked with the Itasca County Sheriff's Dive Team to address the theory that someone had thrown the slippers in one of the state's many water-filled ore pits. During the 40th Annual "Wizard of Oz" Festival, divers scoured the depths of the Tioga Mine Pit lake but came up empty-handed.
Extortion investigation leads to shoes.

Tips flowed in over the years but they led either nowhere -- or to reproductions.
"The thieves not only took the slippers, they took a piece of history that will be forever connected to Grand Rapids and one of our city's most famous children," Johnson said.
A break in the case came in the summer of 2017, the FBI said in a statement.
An individual approached the company that insured the slippers, saying he had information about the shoes and how they could be returned, and "it became apparent that those involved were in reality attempting to extort the owners of the slippers," Special Agent Christopher Dudley, who led the investigation from the FBI's Minneapolis Division, said in the statement.

After nearly a yearlong investigation involving the bureau's Art Crime Team, the FBI Laboratory, and field offices in Chicago, Atlanta and Miami, the slippers were recovered during an undercover operation in Minneapolis, the statement said.
Jill Sanborn, special agent in charge of the Minneapolis division of the FBI, called the shoes' recovery a "significant milestone." But said law enforcement is still seeking information about the 2005 theft.

One of several pairs of ruby slippers worn by Judy Garland in the 1939 film "The Wizard of Oz" on display during the "America's Smithsonian" traveling exhibition in Kansas City, Missouri.
"This is still a very, very active and ongoing investigation," said Sanborn.

Multiple pairs
Over the years, the mystery of slippers' disappearance only seemed to enhance their reputation as one of the most coveted items on the Hollywood memorabilia market.

Valued at $2 million to $3 million and thought to be worth as much as $5 million at auction, they would be hard to sell on the black market -- and even harder to hide.
"Whoever has them, illicitly, has their hands full with them," journalist Rhys Thomas said in "The Slippers."
"One way or another, over the course of time, the shoes will out you."
Thomas tracked down several pairs of the famed shoes for a Los Angeles Times article published in 1988.
In the documentary, Shaw says he bought the shoes from a Hollywood costume designer who found them in MGM Studios' backlot property in Culver City, California. As the story goes, Kent Warner found several pairs on a dusty shelf and took one to the famed MGM Studios auction in 1970. He kept the rest for himself -- the exact number is not clear -- selling them off to collectors, including Shaw.
Meanwhile, a Tennessee schoolteacher won another pair in a contest in 1940. She sold them at auction in 1988 to a private collector for $165,000.
Another pair has been on display in the Smithsonian's National Museum of American History in Washington since 1979. In 2016, the organization launched an online campaign to raise money to restore their luster.
In 2012, a group of actors led by Leonardo DiCaprio purchased a pair to be displayed at the Academy Museum of Motion Pictures, set to open this year in Los Angeles.

As Glinda the Good Witch says in the movie when she is describing the slippers' appeal to the Wicked Witch, "Their magic must be very powerful, or she wouldn't want them so badly." 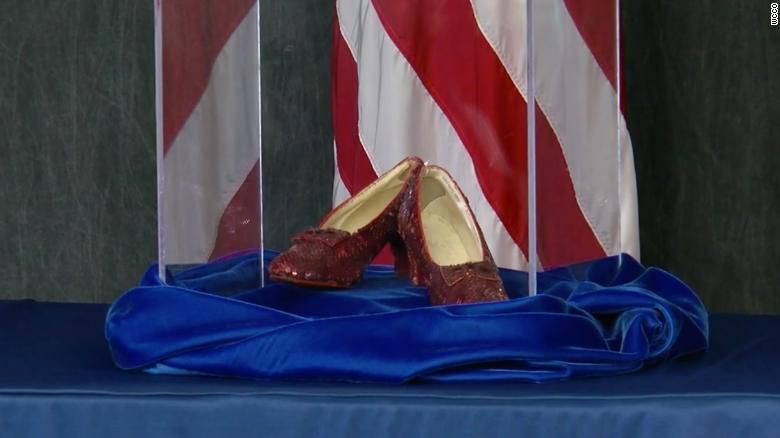 when my daughter was growing up, she loved the wizard of oz...so much so that when she got married, she wore ruby red slippers.  i think i cried more over those shoes than i did over her beautiful dress!!

@Mz iMac @Oznell @nana59  We saw a pair of the ruby slippers in a traveling exibit in Topeka, KS in the early 1990's. They were sturdy dance shoes (amost clunky like tap shoes) so Judy Garland didn't fall or trip during their dance routines. They were literally covered with red sequines which were hand-sewn on what appeared to be red silk fabric (by the time we saw them, the shoes were very worn and dirty) covering the shoe. I believe there was a story, at the time, about four pairs of identical shoes made for Judy Garland to wear as costume changes.

@Mz iMac @Oznell @nana59  We saw a pair of the ruby slippers in a traveling exibit in Topeka, KS in the early 1990's. They were sturdy dance shoes (amost clunky like tap shoes) so Judy Garland didn't fall or trip during their dance routines. They were literally covered with red sequines which were hand-sewn on what appeared to be red silk fabric (by the time we saw them, the shoes were very worn and dirty) covering the shoe. I believe there was a story, at the time, about four pairs of identical shoes made for Judy Garland to wear as costume changes.

same exhibit came here to RI....was surprised at how dingy the shoes were!  but my daughter was thrilled!

So very interesting! Thank you.

I saw a pair of them at the Smithsonian in D.C.  I was surprised at how dull they appeared.  Judy had tiny feet, I think a size 5.  I measured my feet against her imprint in the cement at Grauman's in L.A. and Wowza!  what a difference.

I just read some trivia that said the slippers in the original book and on stage version, 1902/1903 were SILVER and not red. They were changed to ruby red in 1939 to appear more colorful on screen in technicolor...who knew!

This is interesting subject,  but I  remember years ago watching a show with Debbie Reynolds and she showed what I thought were the original ruby slippers. She had a huge warehouse full of film memorabilia.