Auto-suggest helps you quickly narrow down your search results by suggesting possible matches as you type.
Showing results for
Search instead for
Do you mean
Reply
Topic Options
Bri36
Respected Contributor

@momtochloe, have you ever seen this book?   It's very relevant to Chicago 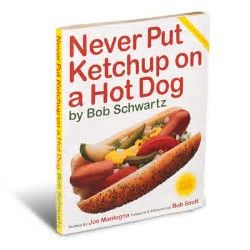 Oh goodness @Bri36 you can't be raised in the Chicagoland area to know that book is not mandatory reading . . . tee hee!  When I was little, I hated mustard so I always put ketchup on my hotdog . . . I can still remember the looks to this day . . .

My family has a chain of restaurants included in the book.  Ketchup is never acceptable on a hot dog    Lol

@momtochloe, have you ever seen this book?   It's very relevant to Chicago

Oh goodness @Bri36 you can't be raised in the Chicagoland area to know that book is not mandatory reading . . . tee hee!  When I was little, I hated mustard so I always put ketchup on my hotdog . . . I can still remember the looks to this day . . .

My family has a chain of restaurants included in the book.  Ketchup is never acceptable on a hot dog    Lol

@Bri36 that's fantastic, I don't want to put you on the spot and I fully understand if you don't want to say but if you wouldn't mind I would love to know your hotdogs "roots" . . .

@momtochloe, I will say it's not Portillo's.  Lol

I grew up on Heinz.  I am not sure what all the kerfuffle regarding Trader Joe's ketchup is all about, but it is my favorite.  It tastes like homemade restaurant ketchup.

Is "catsup" a regional thing?

I don't know @magicmoodz  It might be, I heard it all the time as a kid.  It might also be a time/generation thing from decades ago.

This is from writingexplained dot org

Can't post the link because the page has ads on it, so - The graphs referred to apparently didn't copy into this post, although I did copy them.

"How exactly do you spell everyone’s favorite French fry condiment? It is catsup or ketchup?

What is the Difference Between Catsup and Ketchup?

"Catsup and Ketchup are two different spellings of the same condiment, which, today, is a Westernized version of a condiment first introduced to European traders in the late 17th century.

"During their time trading in the Far East, British sailors of the 1600s developed a taste for the delicious treat we now call ketchup and began exporting it to the West.

"The word itself is thought to come from the Cantonese k’ē chap or the Malay kēhap, both of which refer to a kind of fish sauce. Ketchup was originally a paste made from fermented fish guts (yes, it’s come a long way).

When to Use Ketchup

"Ketchup is the dominant spelling in both American and British English by a large margin. It’s interesting to note, however, that this wasn’t always the case in America (more on that below).

catsup versus ketchup in american english

"The above graph charts the use of ketchup vs. catsup over time, and, as you can see, ketchup is used much more frequently than is catsup. If you are a writer in any English speaking country today, ketchup is the spelling you will want to use.

"Ketchup is the spelling modern speakers and writers are accustomed to seeing. Plus, as Garner’s Modern American Usage Dictionary states, ketchup has the added advantage of phonetically approximating and of most closely resembling the word’s probable source (k’ē chap / kēhap).

"But, interestingly enough, if we examine the graph of catsup vs. ketchup, we can see that the preference for ketchup, all things considered, a relatively recent trend, starting sometime in the mid-to-late 1900s.

History of Ketchup in America

"Believe it or not, catsup was once the dominant spelling in America, and it really wasn’t that long ago that this was the case.

"The graph below separates books published just in American English, and, as you can see, it wasn’t until the mid-to-late 1900s that ketchup overtook catsup as the preferred spelling.

ketchup versus catsup meaning and spelling

"So, why the change in preference? Well, the first thing you need to remember is that the tomato-based ketchup we now use today wasn’t always how ketchup was made.

"Tomatoes weren’t actually added to ketchup until the 19th century. This tomato-based variety quickly caught on in the United States during the first few decades of the 1800s, but was primarily produced by small, local farmers. No company was distributing nationally until at least 1837.

"In other words, there was no national brand that people could identify and symbolize as ketchup, which led to no one ketchup company’s spelling catching on as the industry standard. Whether it was spelled ketchup or catsup was anybody’s guess.

"Heinz, a name now synonymous with ketchup, was actually somewhat of a latecomer to the tomato-based ketchup industry.

"The company did not release its own branded ketchup until 1867, well into the 19th century. Its original branding was “Heinz Tomato Catsup,” but, sometime in the 1880s, the company rebranded itself as “Heinz Tomato Ketchup” as a way to stand out from its competition.

"As Heinz increased its market share throughout the 1900s, its name—and more importantly its spelling—became associated with the tomato-based condiment.

"Eventually, consumer demand for ketchup began to outweigh the demand for catsup, and it was clear that other companies must rebrand or lose more market share.

In 1988, Del Monte switched its branding to be ketchup for that very reason: it became clear that ketchup was the spelling choice of the American consumer.

"There are other theories that try to explain the catsup vs. ketchup battle, but most are unfounded or based on misinformation. Slate Magazine nicely summarizes a few of the more popular explanations and explains why there isn’t much support for them.

When to Use Catsup

"is it ketchup or catsup?  Given the widespread preference for ketchup over catsup, there is really only one reason to still use catsup in your writing.

"If the product name includes catsup as its spelling, you obviously want to use the correct name of the company’s product. In such a case, catsup would be serving as a proper noun.

"Throughout the 19th century, the ketchup vs. catsup battle was waged on the written page as well as in the consumer marketplace.

"Ketchup eventually won out, and it is the preferred spelling in all of English speaking world."

NO, whatever is on sale.

@momtochloe, I will say it's not Portillo's.  Lol

Tee hee @Bri36 The House That Portillo's Built used to be rather close to where I used to live and would always make it a point to drive by there around the holidays as they had the best Christmas decorations (plus it was just a beautiful house) . . . did you see I posted that Buono's is having Dollar Hot Dog Day next Tuesday . . . thankfully there is still a Buono's in my new neighborhood . . .

And that book looks terrific, I just checked it out on Amazon.  I wish I had the expendable cash to snag a copy as I know I would love reading it!

i am much more flexible when it comes to mustard.....maybe because i like so many different styles of mustard? i LOVE yellow mustard and vidalia onions on a kosher hot dog.

yellow.......usually have to have either frenchs or plochmans, sometimes koops

sweet/hot......has to be mister mustard

stone ground.....usually has to be inglehoffer or maille

I buy the Kroger brand when it's on sale a buck a bottle....no one will ever accuse me of having gourmet taste!!!  I only use it occasionally on a hamburger or on top of a meatloaf.