Auto-suggest helps you quickly narrow down your search results by suggesting possible matches as you type.
Showing results for
Search instead for
Do you mean
Reply
Topic Options
Joey Heatherton
Super Contributor

My understanding has always been that Angelina and Brad practiced open marriage, so, it's my opinion that this divorce was not caused by an intimate encounter with a third party. I think Angelina is dumping a bucket of ice water on Brad's head to get a desired result.

I won't be surprised if the couple quietly reconciles in the future, a la Jen Garner and Ben Affleck. When there are history and passion, it's very difficult for certain personality types to completely sever from a lover.  In fact, Angelina and Billy Bob still maintain a close relationship.

When it comes to love and marriage and childraising,  The Hollywoods are very different than the average bears.

Giggle.  This was on my FB feed: 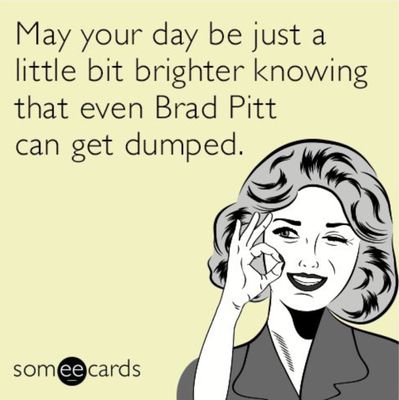 I got tickled this morning since every DJ on the radio and other sidekicks were discussing this situation.  One DJ said he just could not see Brad carting all six children at the same time by himself to McDonald's every other Sat. morning.  Made me think about the below movie since that was the Friday afternoon drop off for the divorced couples, McDonald's parking lot.

This just in at TMZ (and also other sources):

Angelina has been ill and it may have taken a toll on their relationship. I hope for their children, they will find it possible to reconcile. I think they have had a lot of challenges and perhaps with more thought their love for each other will prevail....

The below article says it had to do with the making of their last bomb movie about the couple that did not get along.

The stress on a marriage is HUGE when a couple makes a movie together.   Nicole Kidman and Tom Cruise divorced shortly after completing the painfully difficult  Eyes Wide Shut.

This one took me by surprise.    I hope they can still work things out with counselling.

I remember that was the main reason but I did not see the movie.  I am sure it is hard working with your spouse but some like Paul Newman and Joanne Woodward were able to do just fine for the long haul.  Just watched Long Hot Summer with them a couple of weeks ago and the chemistry is amazing.

I own that movie (The Long Hot Summer) and have watched it countless times.  It's one of those movies that I know every line before it's said.  Love the song too.  My favorite scene is when Ben (Paul) is standing on the balcony looking in at Clara (Joanne) in her bed.  He starts saying "Clara," then says it again, then says "Cla-ha-ha-ra."  OMG, so sexy I can't stand it!!  And they're not even in the same room, let alone touching!!

That man stayed "Hot" all his life.  Almost watched again last night after talking about it yesterday.

OMG, I hate it when big A list celebrities get a divorce. It is all you hear on the news and entertainment sites for weeks. Of course I feel badly for any couple going through a bad time, but I don't know these people so it isn't like I am personally broken up about it. It seems some people really care and just a story I read about the divorce on an entertainment site had people arguing back and forth in the comments section, like they actually knew what was going on. I  cannot imagine putting that much thought and emotion into a complete strangers divorce.

I even hate reading the comments here of posters claiming to know it was because of an affair, because of this or because of that. It is like are you serious? You have no idea the reason why and everything else is just speculation.  It just seems weird to talk about their divorce like we have any type of authority on it. To quote what a magazine is saying is kind of ridiculous considering most of these magazines have been saying they were getting divorced since they got together. It is almost laughable to see all the speculation at times.

I cannot imagine being in their shoes and having people following you around the second you leave the house. I could not live my life like that.

I do hope their children do ok. No matter how rich and famous you or your family is, divorce is not easy on anyone and I am sure their children are going through a tough time.

I don't know if she uses them or not but I will say they make some excellent products which are much more effective than creams that cost hundreds of dollars. The derms I work for hand samples out for Aveeno all the time and would recommend some of their products over high priced creams. I am sure she also gets peels and other cutting edge technology but Aveeno is a much better product than almost any high priced cream out there including ones by La Mer, Chanel, etc...

The reason? She asked Brad what Fight Club was.

( I think Jimmy Kimmel said that ).

All anyone is doing is speculating based on what they have chosen to believe about both of them, from before they were even an item. People had opinions about what kind of person Brad Pitt was while he was married to JA. People had opinions of Angelina dating back to Billy Bob and her first overseas adoption.

I don't think that fundamentally peoples' opinions about the person change over the years. There is still one person's side vs. the other person's side. It's all conjecture and which media outlet you choose to get your "news" from. There's no "proof" of anything.

I have never cared a thing about either of them, so I *really* don't "care" now either. I don't think either of them are prizes. Never thought Brad was the brightest bulb and never thought Angelina was the Earth Mother to All Children she wants to think she is. I do think she is domineering and controlling and while Brad was content to be controlled for a long time, he's finally gotten really tired of it.

This is a good thing. Angie can now play Suffering Mother of the Universe and Brad can get back to being a hands-on dusty Film Bro and feel like a man again.

The kids? Heck, the kids have always known that they're not like other kids. I don't think their lives will change much than their lives have been over the past 1-2 years anyway. They've gotten used to screaming fights and absences already, this won't be sudden. They'll survive.