Auto-suggest helps you quickly narrow down your search results by suggesting possible matches as you type.
Showing results for
Search instead for
Do you mean
Reply
Topic Options
Highlighted
smoky2016
Respected Contributor

I just finished Go Set A Watchman and I really liked it.  I was expecting some alternate world version of TKAM and it wasn't. It really is like a sequel.  I wouldn't call this a draft of that novel at all and I'm not even sure how TKAM was ever developed from this book.  Except for the characters, this is a totally different book.

I just finished DEAD WAKE by Erik Larson and all I can say is WOW - fascinating book and the writing so good you felt like you were there.  Told from both the German U boat commander and the captain of the Lusitania's views it made for a book that read like a novel - hard to believe it really happened.  Also included info about how much the British Intelligence Office knew.  First 75 pages were a little dry for me but after that I couldn't put it down.  Highly recommend.

SAGAL, did think THE KIND WORTH KILLING was pretty good and would recommend it.  My problem with reading in summer is that I am so busy working in the yard (which I love) that I don't get much time to read.  If I read this in winter, I would probably have read it cover to cover in a couple of days.  My summer reading is much more erratic and I usually end up falling asleep in the evening while I read.  Know what I mean?  A summer read has to really grab me to distract from garden work, visitors, day trips etc.

I have two great loves, reading and gardening ... Ok three ... Quilting too when I'm on a roll!  Hate when I have to sacrifice one to do another!  All life's problems should be so easy!  Happy reading!  LM

PS, this is my absolute favorite forum topic.  I would be lost without all the great reads I have found and shared on this forum.  My own book club whose members I know so well that I can click on a favorite reader friend knowing I will find something awesome to read. Same applies to movies and series.  Love!

Down the rabbit hole by Holly Madison

Boo by Neil Smith, a story of finding yourself in the world ~~~ Just finished Jane Smiley's Good Luck.  Liked the generational aspect of it but could have used less of the war part w/one of the sons.  Looking forward to reading the next 2 of this series to read more about the next generation of this family.

Onto Nancy Thayer's The Guest Cottage.

I loved Jane Smiley's Some Luck. I bought the second book in the trilogy, but haven't started it yet.

I looooooved The Kind Worth Killing!

Right now I am halfway through the latest from Lars Kepler The Sandman and it took forever to arrive from the UK (bought from Amazon). Not sure why it's not available in the US but it's an amazing page turner.

Peter Swanson.   I haven't read it yet but I  bought because it one of the kindle monthly July deals on amazon. 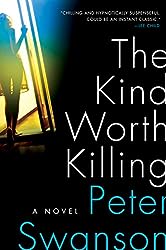 Just finished THE DIRTY SECRETS CLUB by Meg Gardiner.  Summary below.  I liked it, a page turner suspense novel...LM

An ongoing string of high-profile and very public murder-suicides has San Francisco even more rattled than a string of recent earthquakes: A flamboyant fashion designer burns to death, clutching the body of his murdered lover. A superstar 49er jumps off the Golden Gate Bridge. And most shocking of all, a U.S. attorney launches her BMW off a highway overpass, killing herself and three others.

Enter forensic psychiatrist Jo Beckett, hired by the SFPD to cut open not the victim’s body, but the victim’s life. Jo’s job is to complete the psychological autopsy, shedding light on the circumstances of any equivocal death. Soon she makes a shocking discovery: All the suicides belonged to something called the Dirty Secrets Club, a group of A-listers with nothing but money and plenty to hide. As the deaths continue, Jo delves into the disturbing motives behind this shadowy group—until she receives a letter that contains a dark secret Jo thought she’d left deep in her past, a secret that ends with the most chilling words of all: “Welcome to the Dirty Secrets Club.”