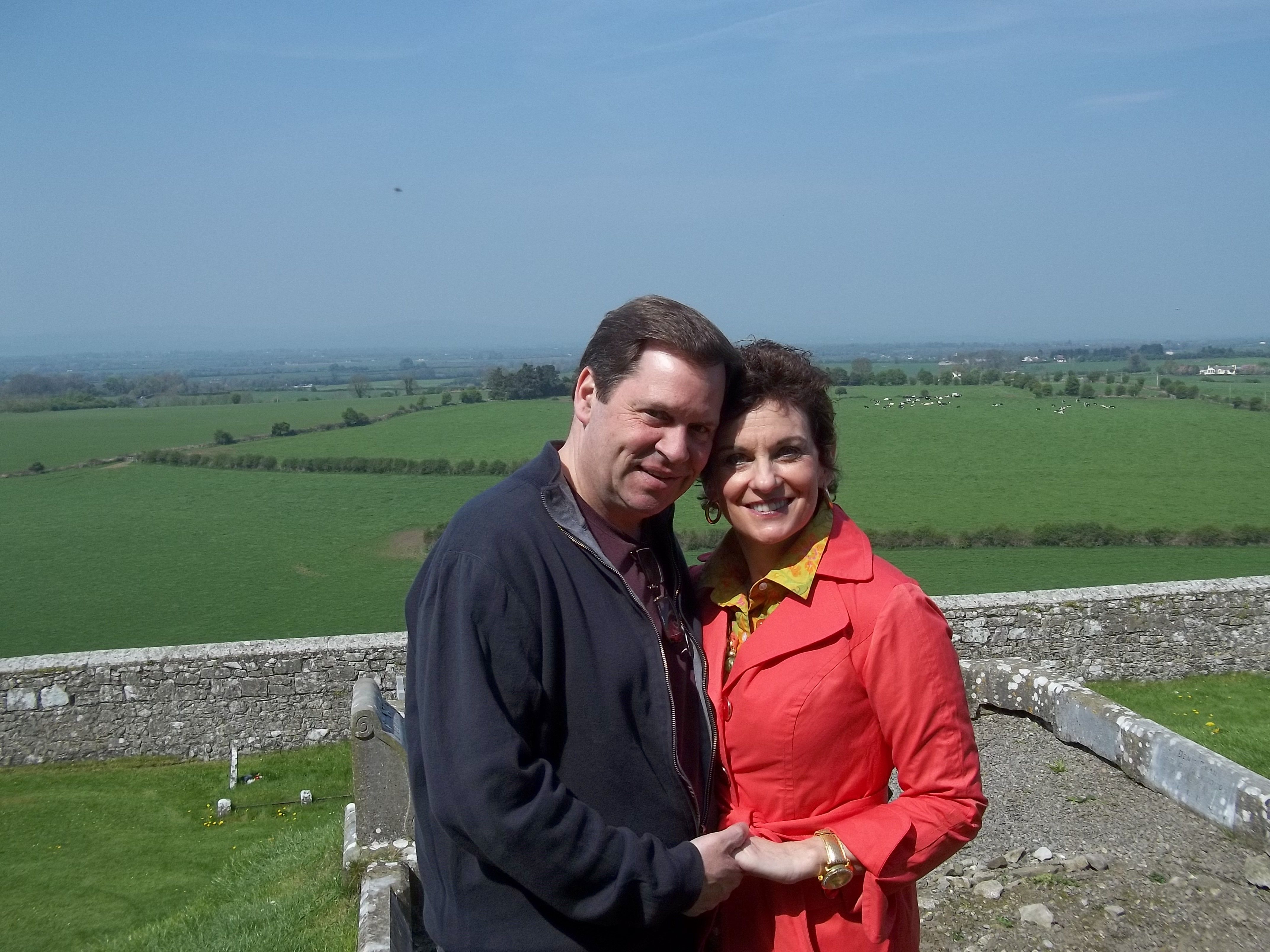 My husband, Sean, spent many summers in his childhood on his family’s farm in County Tyrone.  As an adult he continued to visit Ireland often, and we had the privilege of traveling there together several times.  But one thing was missing, neither Sean nor I, in all our trips to Ireland, had ever visited the Rock of Cashel. 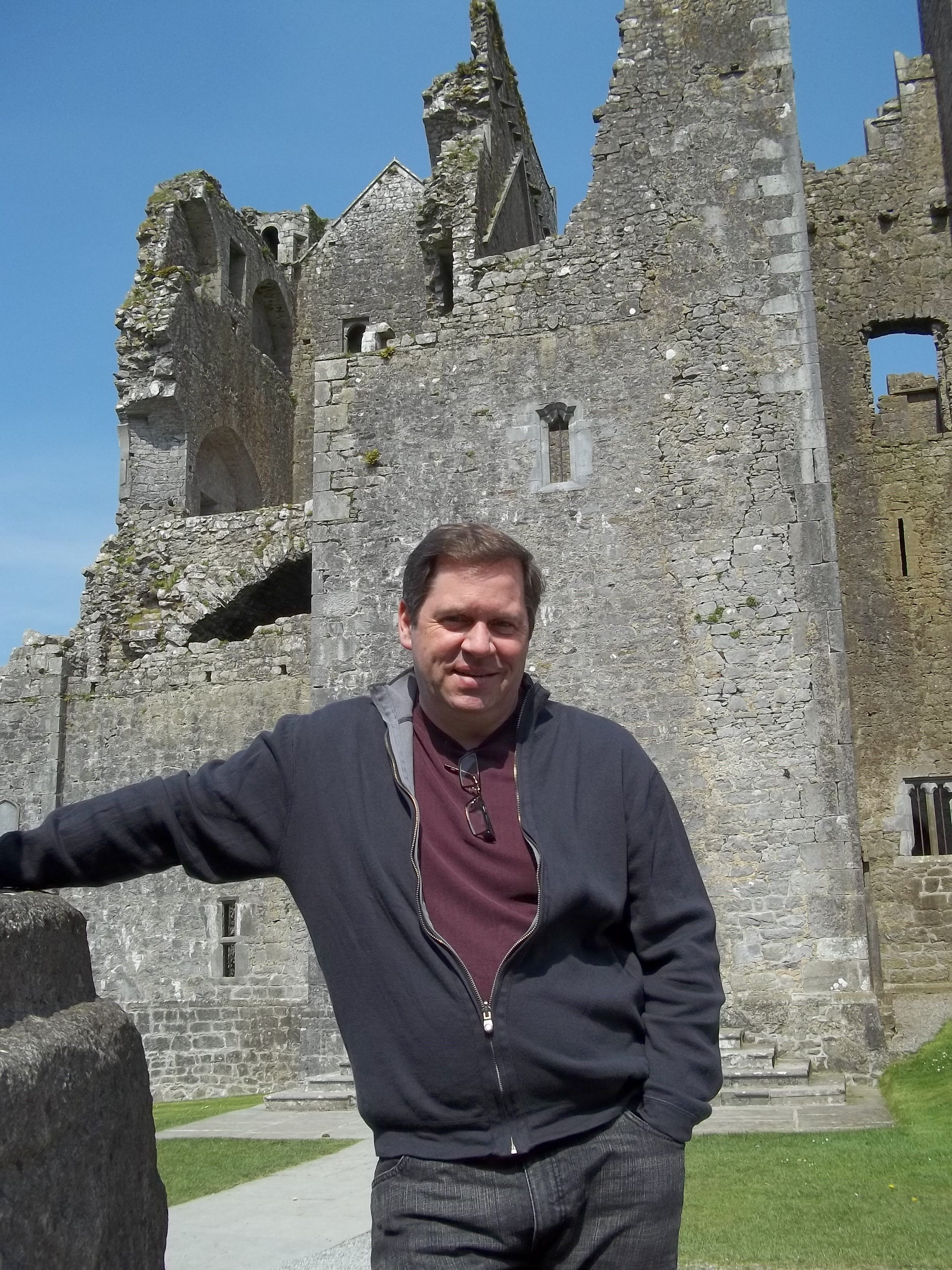 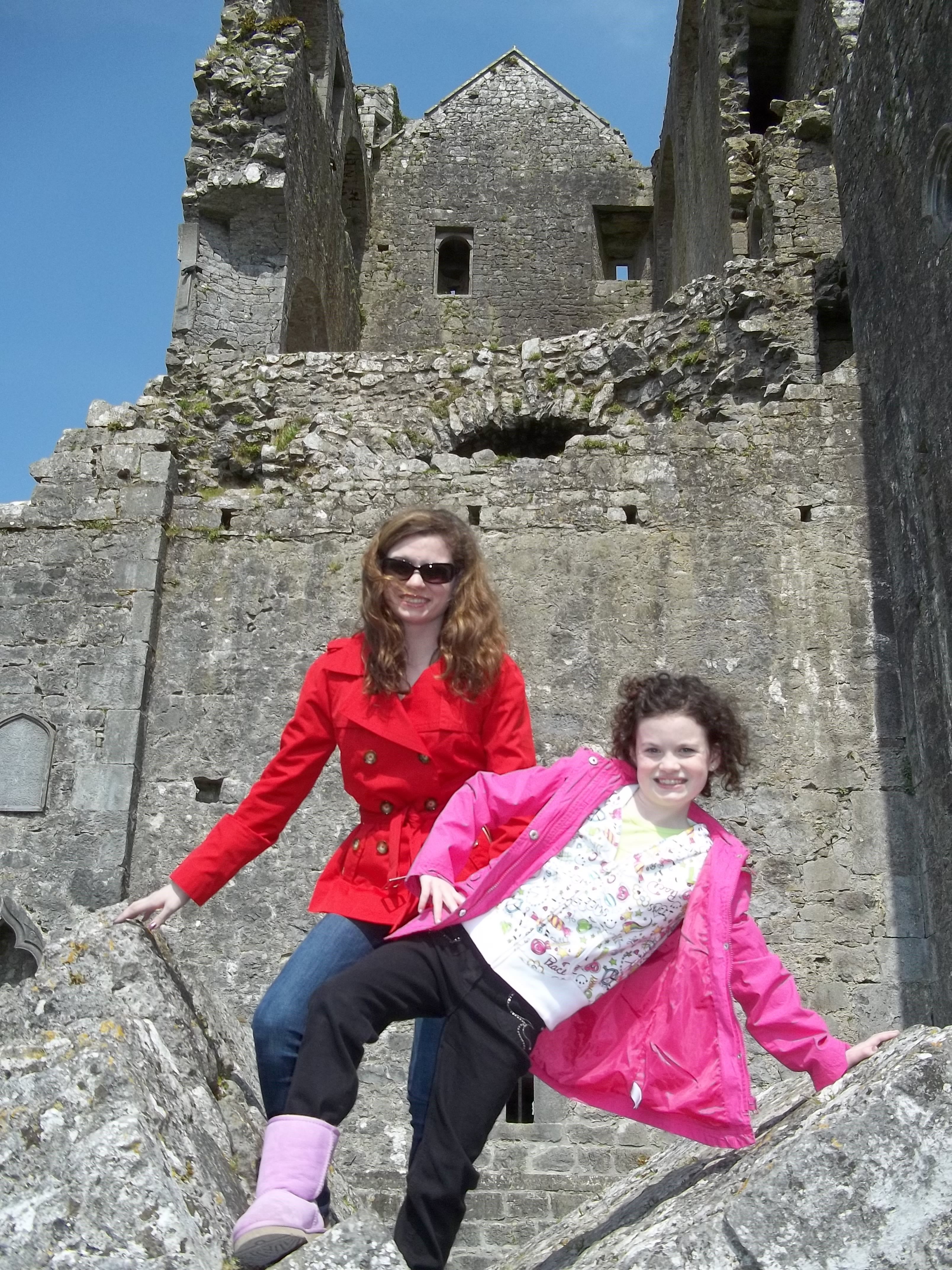 If it sounds like a spectacular natural site that’s true, it is an amazing place to visit.  It’s history dates back to the legend that St. Patrick himself arrived in Cashel in AD 432 and baptized King Aengus to become Ireland’s first Christian ruler.  The remains of the buildings you can tour today date back to the 12th century, in fact the round tower on the grounds is the oldest  building there.  Cormac’s Chapel is one of earliest examples of 13th century architecture in Ireland, and my visitors look for the famous St’ Patrick’s cross. 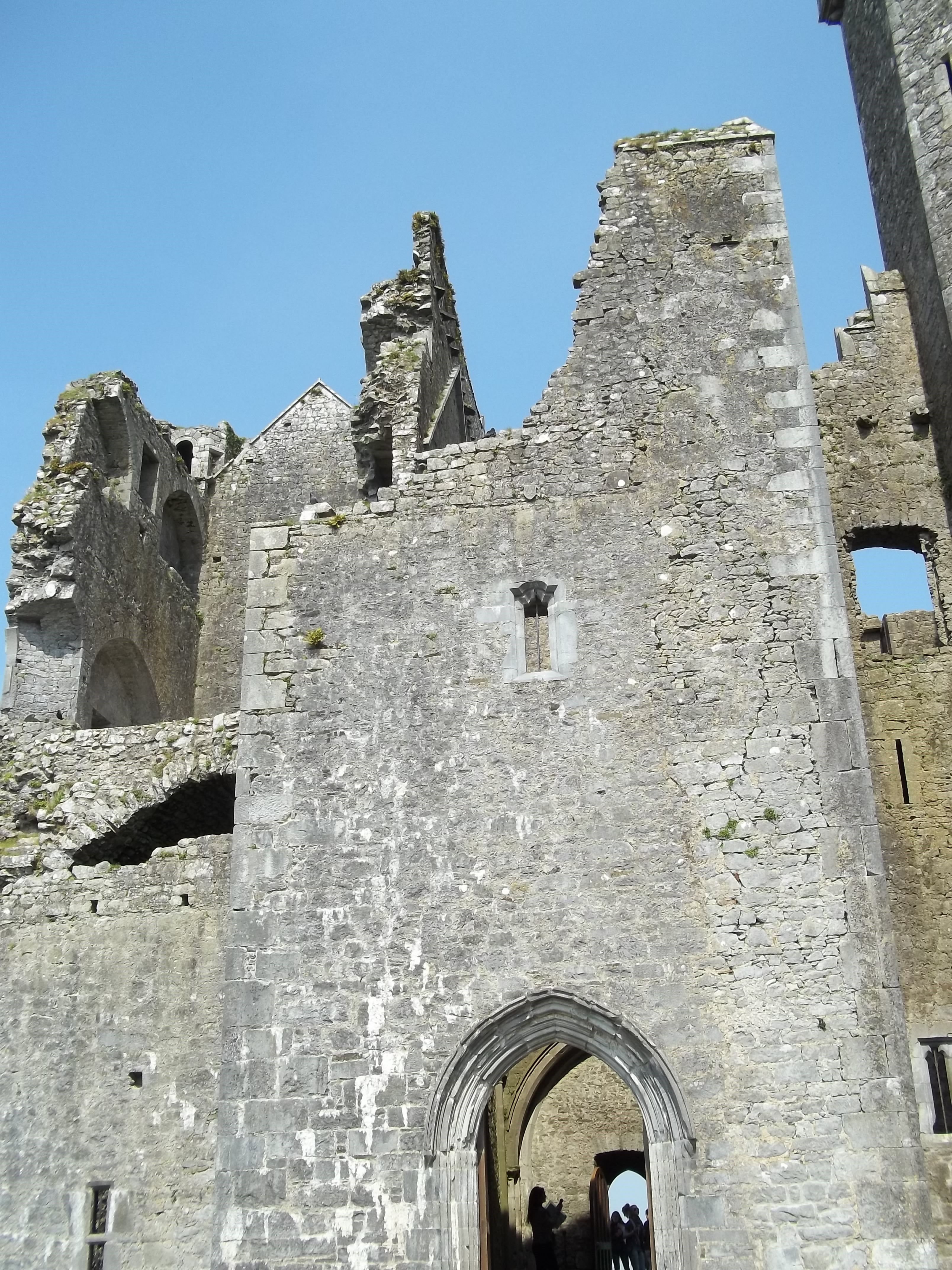 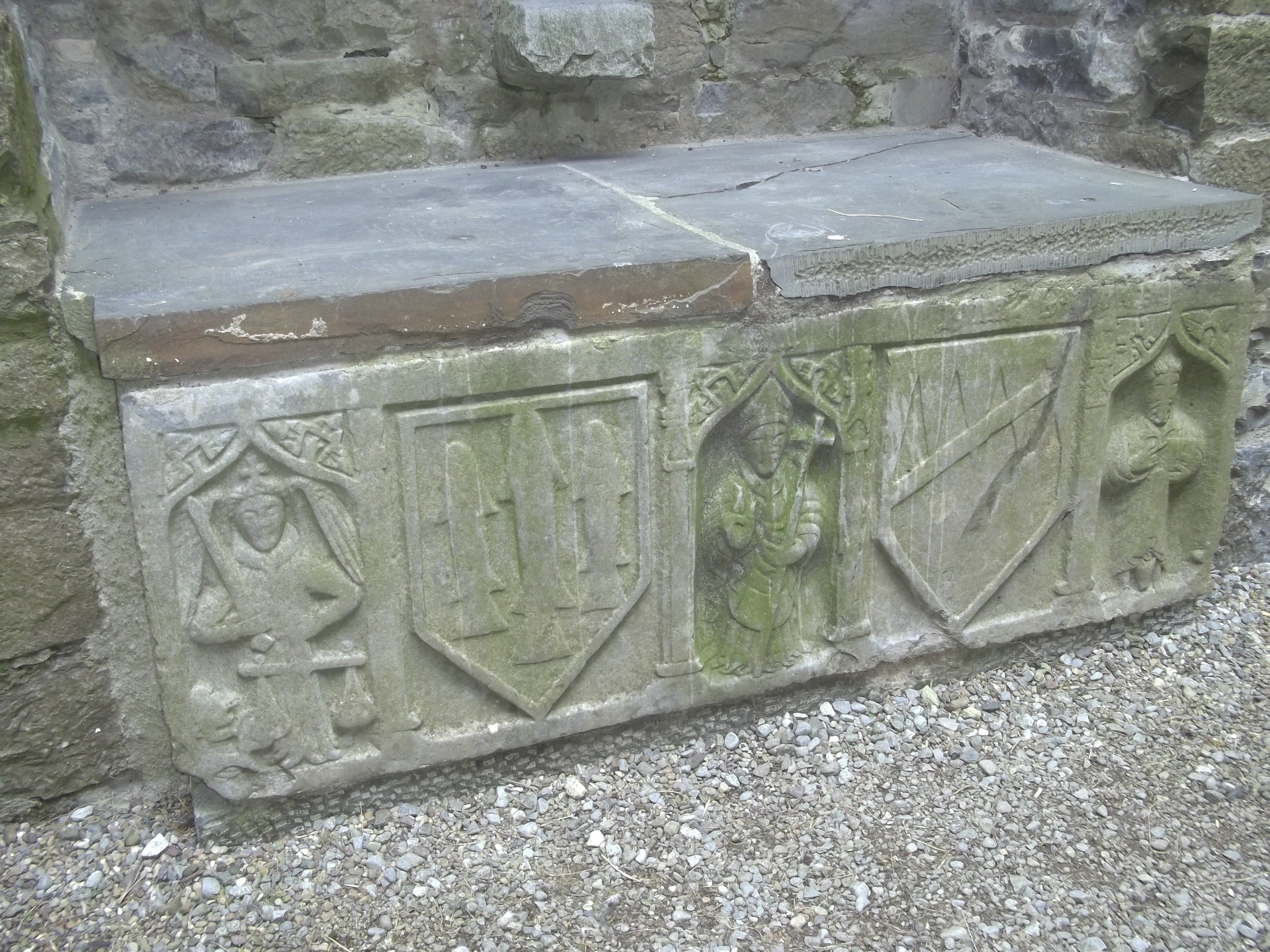 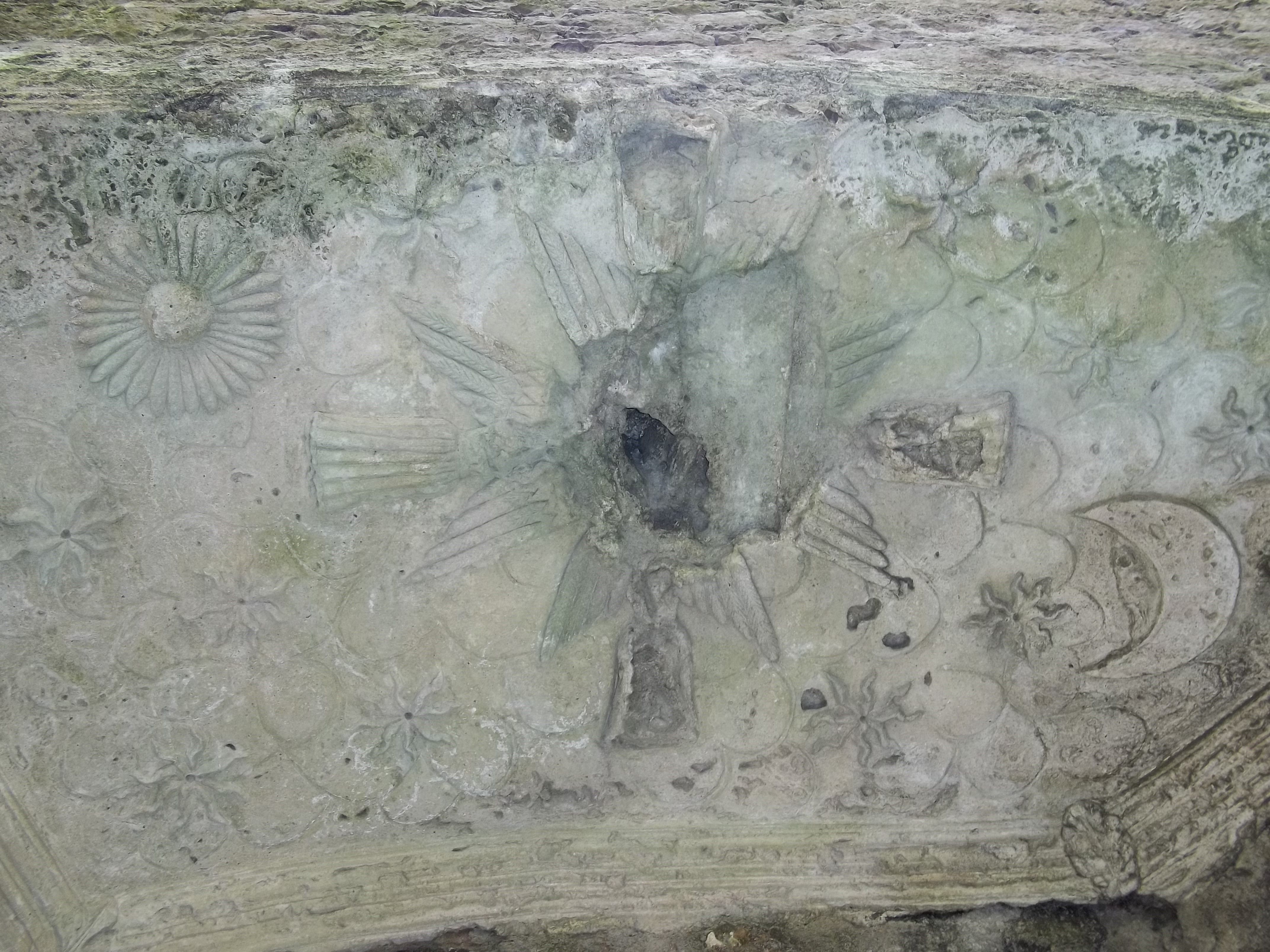 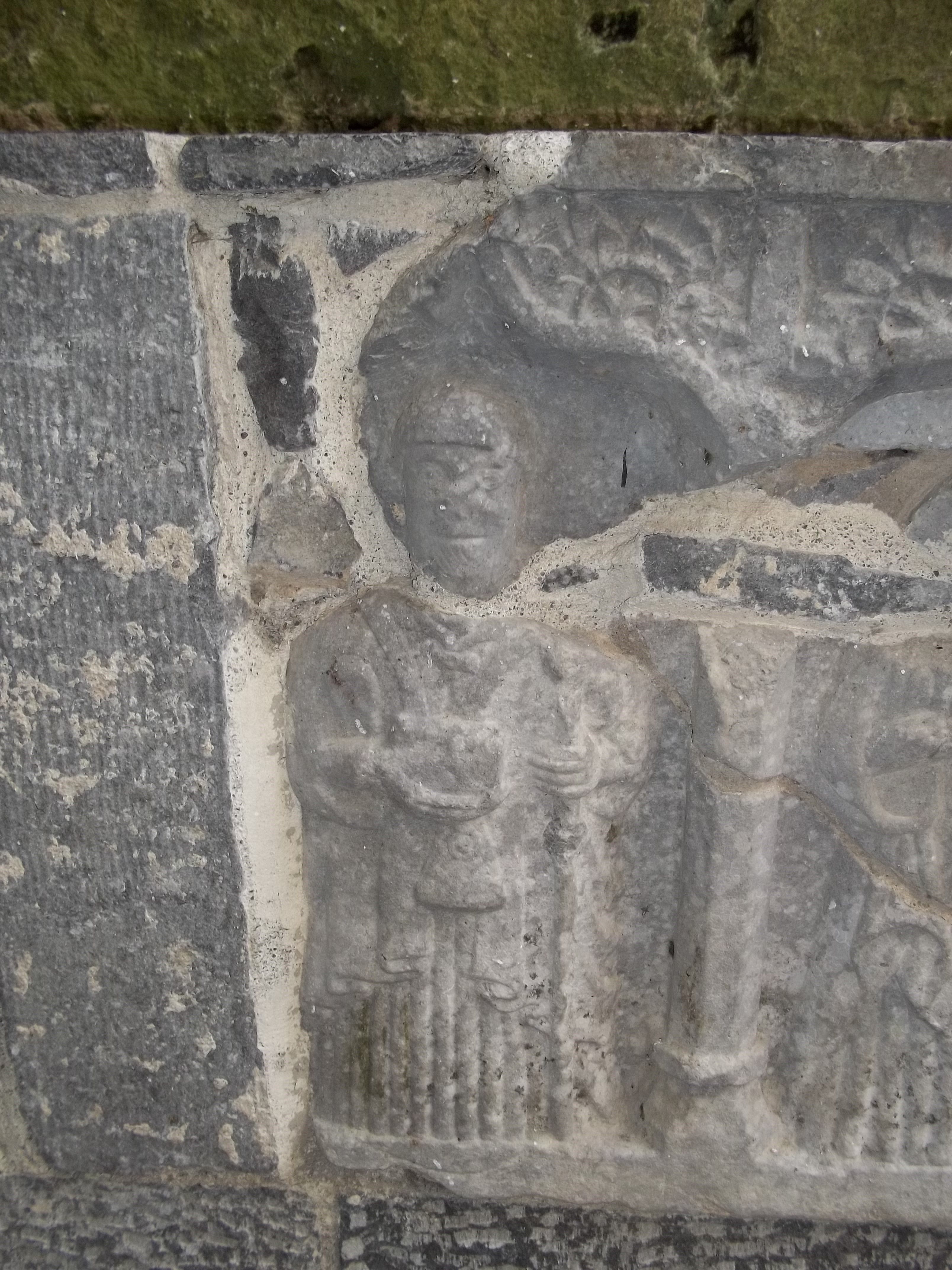 When we took our family trip to Ireland in 2011, we decided we needed to go tour the Rock of Cashel.  We drove from Dromoland Castle in County Clare, on our way to Dublin.  It was a spectacular day!  The sky was so blue and the sun was so bright, that many people were telling us they couldn’t believe that it was April, not mid-summer.  As you drive to the Rock of Cashel, your first glimpse of the famous cathedral ruins is in the distance as it rises up from the country side. No wonder they say the ancient Kings of Ireland used this site.  It is majestic from all angles. 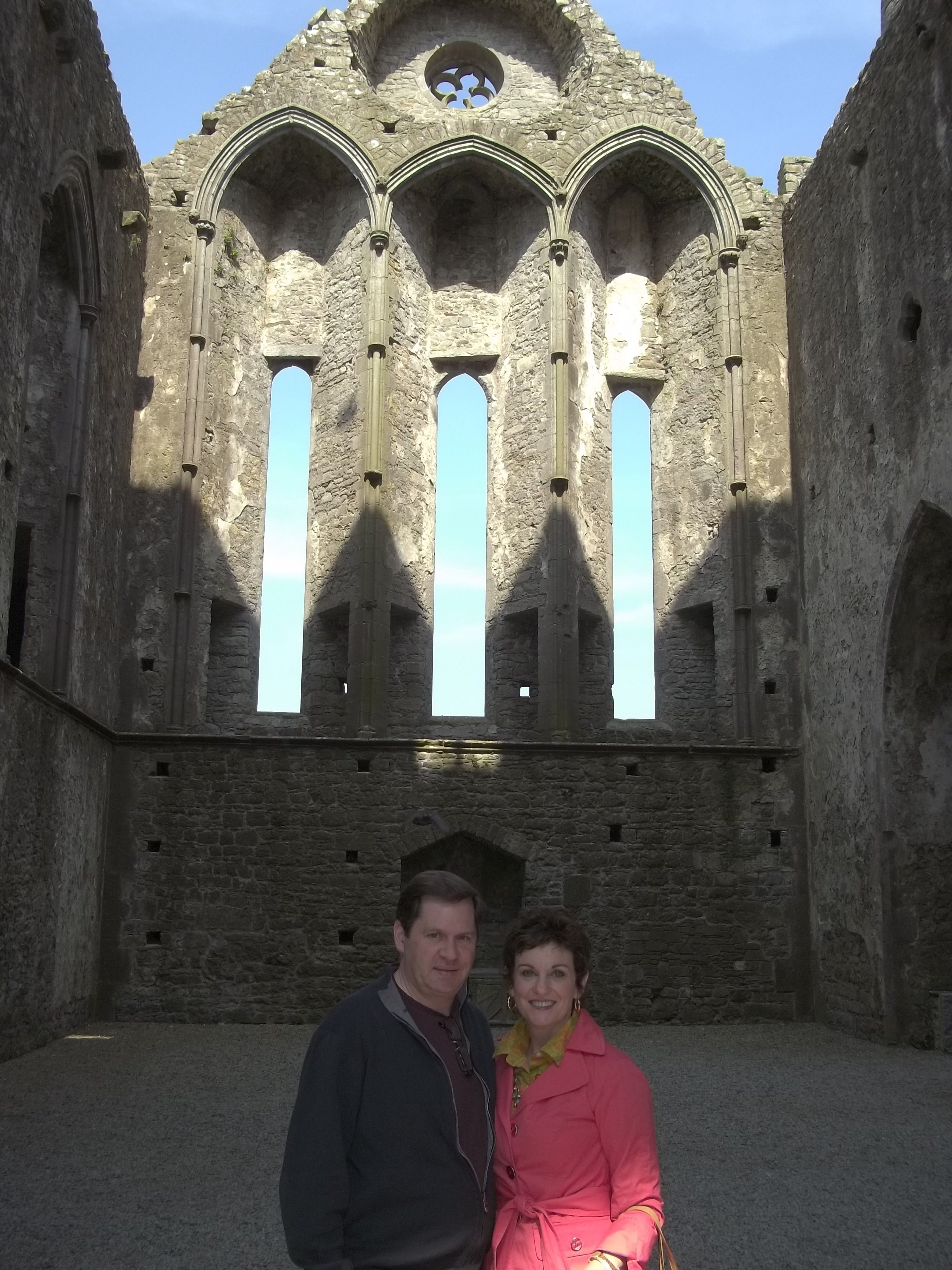 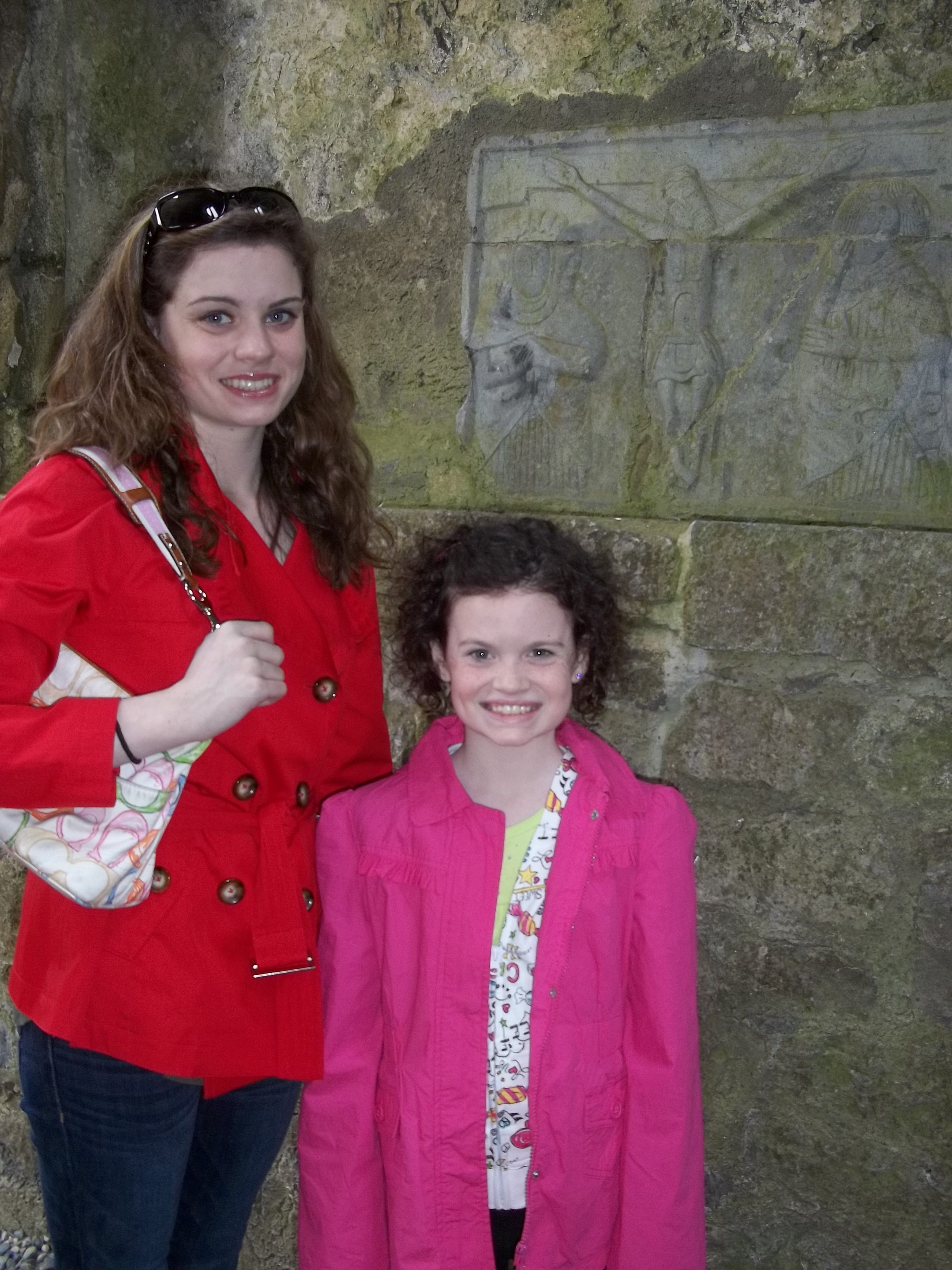 We spent the morning walking through the remains of the church, and seeing the restorations of many of the carvings.  Somehow the blue sky as the roof of the cathedral made it even more spectacular, as you marveled that the walls were her 800 years old.  We still say that this was one of our favorite memories of any trip we have taken together.  What made it even more special is that we toured the site on Holy Thursday before Easter, and seeing the ancient carvings of the crucifixion was so powerful.  I felt surrounded by the prayers of countless people over hundreds of years, and it was humbling. 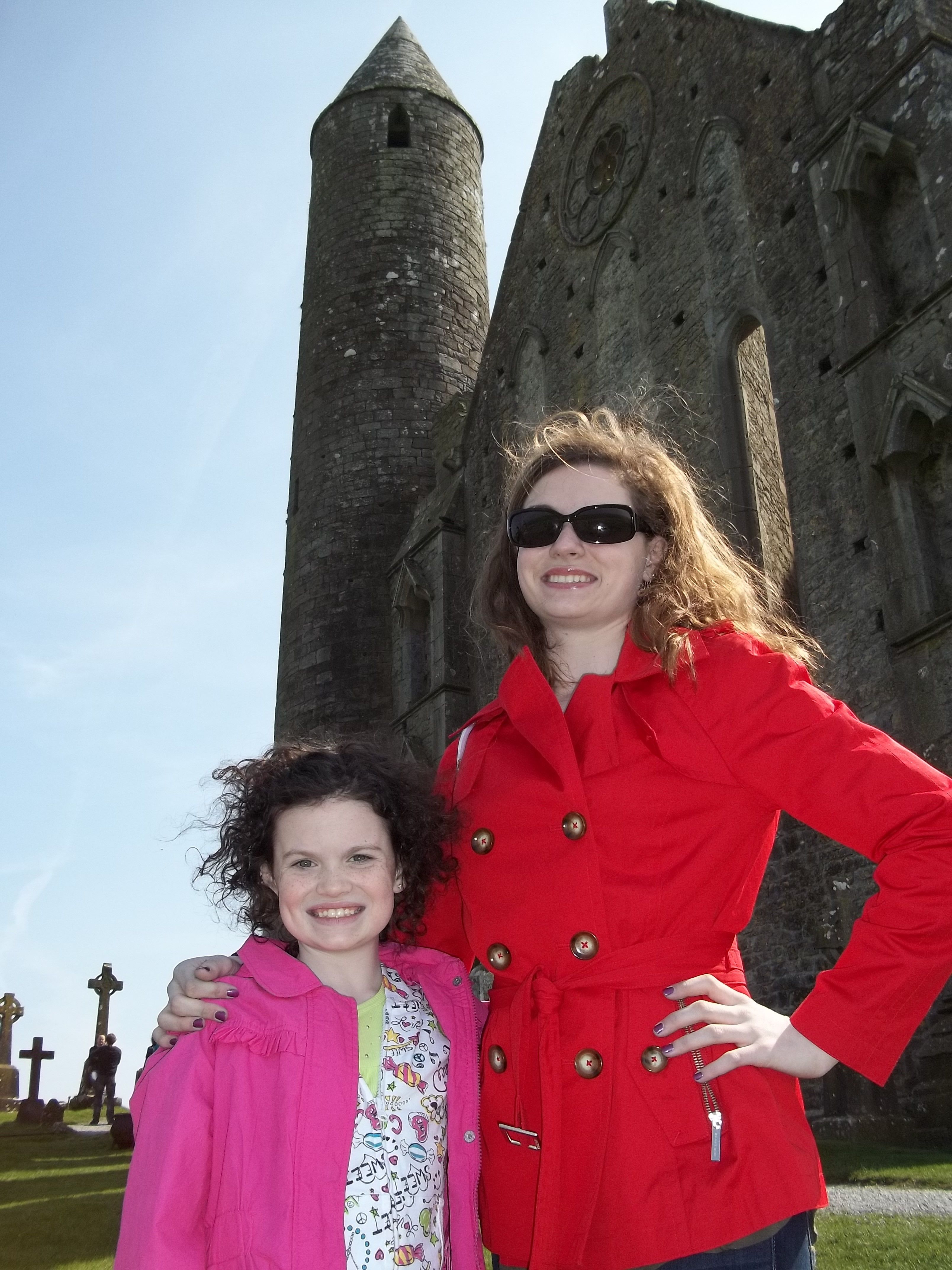 We were so glad we finally got to the Rock of Cashel, and not surprised that it continues to inspire artists to this day.

Hi Jane!   First of all, I must tell you that your husband is a hunk!   You look so precious together in the pictures.   And your daughters are very lovely.   They look like they are very close with one another and that is a wonderful thing.   I so much enjoyed the pictures and the history that you included.   I am inspired to look up Ireland and learn more.   I hope that you have more family trips to share with us.   Would love to see more!   Thank you for sharing your family and the special trip with us.   See you in the shoe department,   Love SC

Jane, thanks for sharing the pictures of your special trip!  You and Sean have a lovely family!

I love the pictures Jane!   Thanks for sharing them with us.   My husband and I were fortunate to vist Ireland and Scotland a year ago in April.  I have to say we travel often and it was one of the most spectacular trips we've ever taken.  Of course my dad was Scottish (as he has passed on) so that was extremely speical for me.  Love the Guinness! 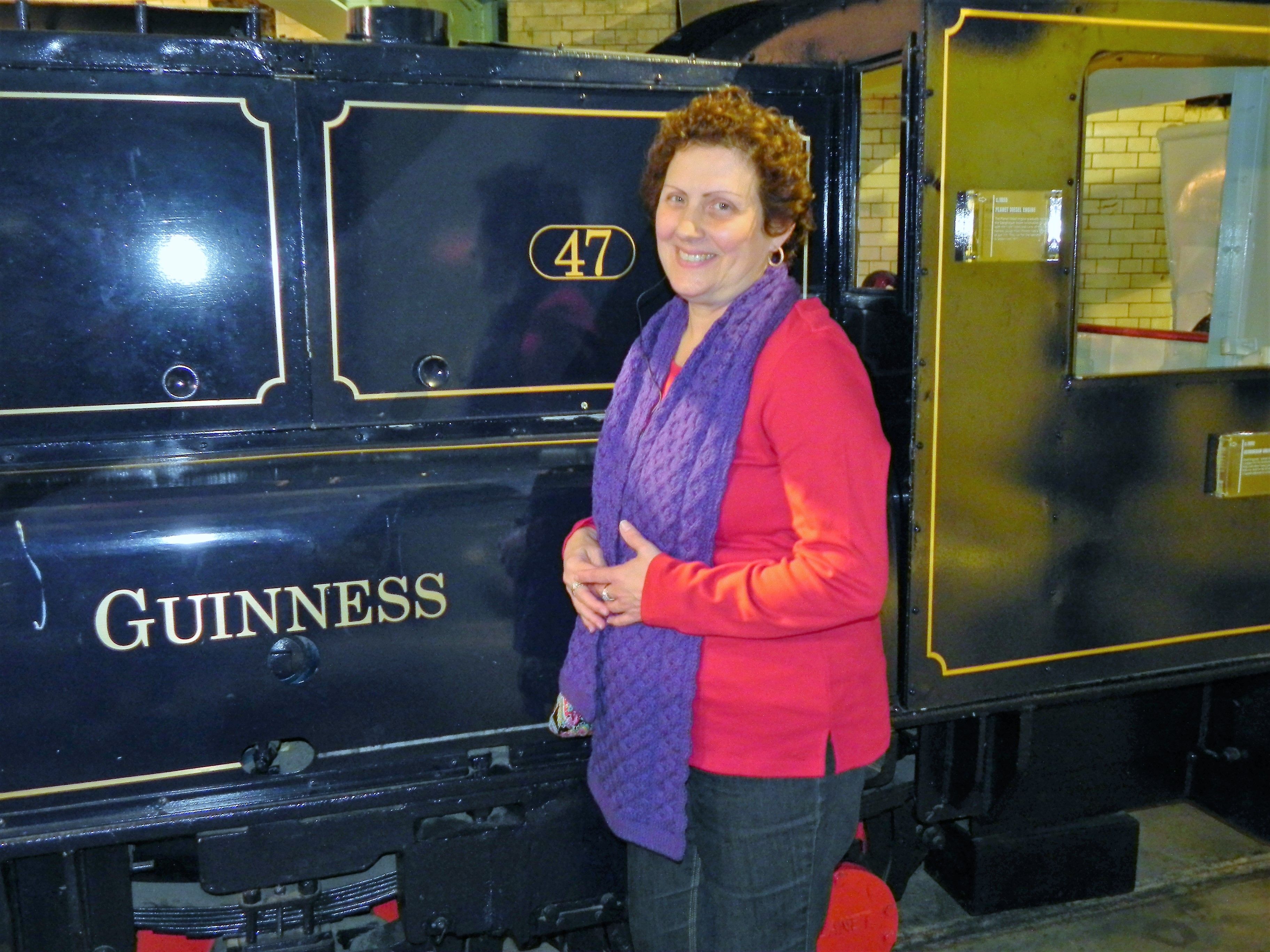 Oh my..a trip of a lifetime for most of us, but you get to go often, lucky gal. The historical structures are AMAZING. How fortunate to be right there and see it in person. (seriously, my mouth would drop, lol!!) You have a lovely family, girls are beautiful and nice to see the entire family. I love you as a host, you always have a smile and are geniune in every way. Thank you for sharing these pictures with us...Makes me want to pack a bag and go! Happy St. Patty's day! You're the best!

You're a sweetheart for sharing your adventures. I have a friend that lives in Northern Ireland, and hope to visit her there and see the rest of the isle.

Amazing pictures...just breathtaking!  My sister and I (in our fifty's now) have been saying we want to take a trip to Ireland together for the past 10 years but haven't done it yet.  These pictures are inspiring me!  I told her, we better get there before we both need walkers! ha!

Ireland looks like a beautiful place, and I do also so enjoy the St. Patrick's Day celebration that is on the Q every year; I try to never miss it.  And I have to tell you, Jane, you MAKE those shows...when you left the Q several years ago, the St. Patrick's Day celebration was just not the same!!!  It was like having Irish coffee but leaving out the Bailey's Irish Cream!

So glad you are back, your personality and enthusiasm, not only for the St. Patrick's Day shows but for every show on the Q is apparent and appreciated!

Hope you and yours have a very "Happy St. Patty's Day".